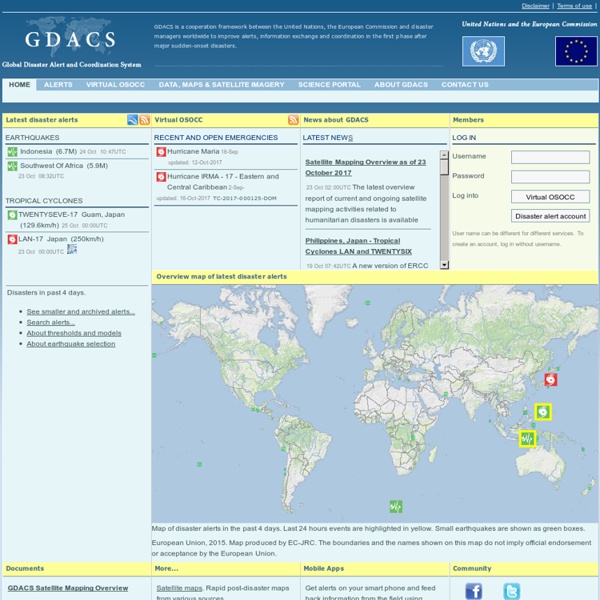 Japan earthquake - live updates 7.22am: Japan has been rocked by a series of earthquakes causing a major Tsunami. Here's some details from our Japan correspondent, Justin McCurry: A series of powerful earthquakes struck north-east Japan on Friday afternoon, triggering warnings of tsunami as high as 10 metres and shaking buildings in Tokyo.The first earthquake struck at 2:46pm local time and measured magnitude-8.8, according to the US geological survey. Within 30 minutes the same region was rocked by two more big quakes of slightly lower intensity, Japanese news reports said.The first quake, Japan's biggest for seven years, struck at a depth of six miles about 80 miles of the eastern coast, according to Japan's meteorological agency.The Pacific tsunami warning centre in Hawaii said a tsunami warning was in effect for Japan, Russia, Marcus Island and the Northern Marianas. 7.26am: Al-Jazeera is streaming live coverage of the events in Japan. Some other developments:

blog » Hexbins! Binning is a general term for grouping a dataset of N values into less than N discrete groups. These groups/bins may be spatial, temporal, or otherwise attribute-based. In this post I’m only talking about spatial (long-lat) and 2-dimensional attribute-based (scatterplot) bins. Such binnings may be thought of as 2D histograms. This may make more or less sense after what lies beneath. If you’re just after that sweet honey that is my code, bear down on my Github repository for this project — hexbin-js. Incident and Emergency Management Market Research Report by Forecast to 2023 Market Highlights: The rising terror attacks and unpredictable natural calamities occurrence are the key factor driving the incident and emergency management market. Government initiatives in reducing this harmful activities is playing key role in incident and emergency management market. According to the study, satellite phone as a communication device accounts for highest market share in the market. The increasing product and solution technology in preventing enterprise valuable assets is expected to grow rapidly. While there are some restraints, which may hamper the market includes lack of awareness about the benefits of this system is affecting the market growth.

Audioboos from Japan detail the tragedy of the Tsunami As with all breaking news today, social tools like Twitter are showing their strength in getting the breaking news out there about the awful events in Japan. Just as everyone else is, I am glue to Twitter right now to see what’s happening, but reports are coming in via many other means. One of those is Audioboo, which has long had a page of the latest “boos” streaming in from users. Here’s three from Tristan Mathers in Japan just 30 minutes ago who details how phone services are going down and confusion has engulfed the area. The Boo Map, which puts recording on a Google Map, also comes in handy at times like these. Gallery Sub-Sort Natural Disasters by: Name / Path / Row / Latitude / Longitude / Sensor / Date Posted Return to Map Landslide near Oso, WashingtonSensor: L8 OLIPath/Row: 47/26Lat/Long: 48.900/-122.800Category: Natural DisastersDownload High ResolutionDate Posted: 04/02/2014 Grampians Fire, AustraliaSensor: L8 OLIPath/Row: 94/86Lat/Long: -37.500/142.800Category: Natural DisastersDownload High ResolutionDate Posted: 02/13/2014 Agno River Valley flooding, Philippines (Typhoon Haiyan)Sensor: L8 OLI, L7 ETM+Path/Row: 116/48Lat/Long: 17.300/121.500Category: Natural DisastersDownload High ResolutionDate Posted: 11/14/2013

WATCH: Swarm of Autonomous Robots Flies Complicated Formations Forget the Blue Angels — these nano quadrotors from the University of Pennsylvania’s GRASP Laboratory can fly in some pretty stunning formations. You might remember these robots from other YouTube videos where they’ve autonomously built structures and shown incredible dexterity by doing flips and darting through tiny windows. Now, they’ve formed a swarm that can fly complicated patterns in three dimensions, avoid obstacles in its path and coordinate to fly a figure-eight.

The Theory of Planned Behavior and Disaster Preparedness Introduction A disaster is “a serious disruption of the functioning of a community or a society involving widespread human, material, economic or environmental losses and impacts, which exceeds the ability of the affected community or society to cope using its own resources”1. Although the categories and causes of disasters may differ, their impacts are common; therefore, a disaster plan should address disaster impacts2. Disaster preparedness is defined as actions that ensure resources necessary to carry out an effective response are available before a disaster, or they can be obtained promptly when needed3.

Powerful quake rocks Japan - Asia-Pacific Hundreds of people are dead after one of the strongest earthquakes ever recorded struck Japan, triggering a devastating 10-metre-high tsunami along parts of the country's northeastern coastline. The massive 8.9-magnitude earthquake struck on Friday afternoon local time, creating gigantic waves which swept away cars, boats, homes and people as the surging water overwhelmed coastal barriers. Widespread fires burned out of control and Japan's nuclear industry was on alert as reactors shut down automatically as a safety precaution. Millions of people are reported to be without electricity, airports are closed and public transport in Tokyo and other cities has come to a halt as Japan reels amid the twin devastations.