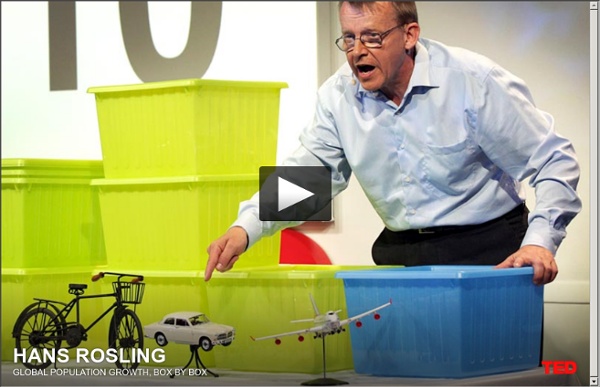 Human rights & democracy statistics About this Video In this video, made for the Oslo freedom Forum 2009, Hans Rosling discuss the difficulty in measuring progress in Human Rights in the form of comparable numerical statistics. He also shows the surprisingly weak correlation between existing estimates for democracy and socio-economic progress. The reason may be that democracy and human rights measurements are badly done. It may also be that democracy and human rights are dimensions of development that are in themselves difficult to assign numerical values. But it also seems as much improvement in health, economy and education can be achieved with modest degrees of human rights and democracy.

How Companies Must Adapt for an Aging Workforce - David Bloom and David Canning by David Bloom and David Canning | 9:00 AM December 3, 2012 The world’s population is growing older, taking us into uncharted demographic waters. By 2050, over one-fifth of the US population will be 65 or older, up from the current figure of one-seventh. The number of centenarians worldwide will double by 2023 and double again by 2035. Projections suggest life expectancy will surpass 100 in some industrialized countries by the second half of this century — roughly triple the lifespan that prevailed worldwide throughout most of human history. Anti-aging technologies — from memory-enhancing drugs to high-tech joint replacements — have combined with healthy lifestyles not merely to increase longevity but to make old age healthier for many people.

Is the U.S. Population Getting Older and More Diverse?, Alexa Jones-Puthoff, U.S. Census Bureau - Newsroom Friday, June 14, 2013 at 8:15 a.m. EDT Alexa Jones-Puthoff, chief of the Population Estimates Branch, will appear live on C-SPAN's "Washington Journal" to discuss characteristics about the U.S. population. The Joy of Stats About the video Hans Rosling says there’s nothing boring about stats, and then goes on to prove it. A one-hour long documentary produced by Wingspan Productions and broadcast by BBC, 2010.

Should Your Next CEO be an Inside Outsider? - Stefan Stern by Stefan Stern | 12:00 PM December 3, 2012 Grow your own. That’s always been pretty good advice, whether of the horticultural or organizational variety. 40 maps that explain the world By Max Fisher By Max Fisher August 12, 2013 Maps can be a remarkably powerful tool for understanding the world and how it works, but they show only what you ask them to. So when we saw a post sweeping the Web titled "40 maps they didn't teach you in school," one of which happens to be a WorldViews original, I thought we might be able to contribute our own collection. Some of these are pretty nerdy, but I think they're no less fascinating and easily understandable. A majority are original to this blog, with others from a variety of sources.

Desktop This software has been renamed to Gapminder World Offline Because of technical problems the software on this page is no longer being maintained! Please visit Gapminder World Offline (Beta) instead. Gapminder Desktop With Gapminder Desktop you can show animated statistics from your own laptop! Install the free software and watch the how-to video with Hans Rosling. Our Measurement Model - The Circumplex Developed by psychologist Dr. J. Clayton Lafferty over 30 years ago, the Human Synergistics Circumplex provides a way to “see” what drives human thinking, behaviour and performance - at the individual, leadership, group and organisational levels. It breaks down the factors underlying performance into 12 ways or “styles” of thinking, behaving and interacting that are arranged in a circular manner, based on their similarity. Some styles are highly effective and productive (referred to as ‘Constructive’) and some are not as effective (referred to as ‘Aggressive/Defensive’ or ‘Passive/Defensive’). Whether effective or not, they all describe what’s happening inside an organisation and provide a direction for change and development.

lapse: Landsat Satellite Images of Climate Change, via Google Earth Engine TIME and Space | By Jeffrey Kluger Editors note:On Nov. 29, 2016, Google released a major update expanding the data from 2012 to 2016. Read about the update here. Spacecraft and telescopes are not built by people interested in what’s going on at home.