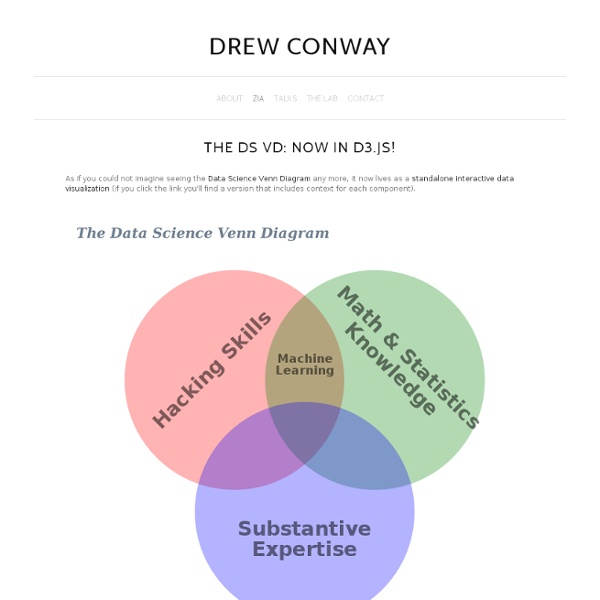 This happens to be one of those rare instances where the benefit of hindsight does not make me regret something said flippantly on a panel. I deeply believe that in order to truly change the world we cannot simply "throw analytics at the problem." To that end, the medical and health industries are perhaps the most primed to be disrupted by data and analytics. To be successful, however, a deep respect for both the methodological and clinical contexts of the data are required. It is incredibly exciting to be at an organization that is both working within the current framework of health care and data to create new insight for people, but also pushing the envelope with respect to individuals' relationships with their own health. The challenges are technical, sociological, and political; but the potential for innovation that exists in this space comes along very rarely. I feel lucky to have an opportunity to move into the health data space now. Sensor data Strength of team

Analyzing Network Characteristics Using JavaScript And The DOM, Part 1 Rethinking Mobile Tutorials: Which Patterns Really Work? Pattern libraries are a great source of inspiration and education for designers. But common practice doesn’t always equal best practice. In this post, we’ll look at why many common tutorial patterns are ineffective and how you can leverage game design principles to increase user engagement. After the release of the first edition of Mobile Design Pattern Gallery, Intuit asked me to speak with its mobile team.

Floyd–Warshall algorithm . A single execution of the algorithm will find the lengths (summed weights) of the shortest paths between all pairs of vertices, though it does not return details of the paths themselves. The Floyd–Warshall algorithm was published in its currently recognized form by Robert Floyd in 1962. However, it is essentially the same as algorithms previously published by Bernard Roy in 1959 and also by Stephen Warshall in 1962 for finding the transitive closure of a graph.[1] The modern formulation of Warshall's algorithm as three nested for-loops was first described by Peter Ingerman, also in 1962. The algorithm is an example of dynamic programming.

Reed's law Reed's law is the assertion of David P. Reed that the utility of large networks, particularly social networks, can scale exponentially with the size of the network. The reason for this is that the number of possible sub-groups of network participants is 2N − N − 1, where N is the number of participants. This grows much more rapidly than either Mint Digital's tech blog Collabify – everyone curates the party playlist May 10, 2012 § Last night was the first Music/Tech meetup. It went really well and we had a blast.

DiffRank Omar Odibat and Chandan K. Reddy Networks have been extensively used to model various complex systems such as online social networks, co-authorship and citation networks and gene networks. Due to different kinds of variations such as temporal, spatial, topic and phenotypic variations, several variants of the same network may exist. For several practical problems, identifying the nodes that are changing between the networks provide vital information regarding the dynamics of the network states. Given two networks where the nodes are the same in both networks, but the edges are different, we consider the problem of identifying a set of hubs that best explain the differences between the two networks.

Metcalfe's law Two telephones can make only one connection, five can make 10 connections, and twelve can make 66 connections. Metcalfe's law states that the value of a telecommunications network is proportional to the square of the number of connected users of the system (n2). First formulated in this form by George Gilder in 1993,[1] and attributed to Robert Metcalfe in regard to Ethernet, Metcalfe's law was originally presented, circa 1980, not in terms of users, but rather of "compatible communicating devices" (for example, fax machines, telephones, etc.)[2] Only more recently with the launch of the Internet did this law carry over to users and networks as its original intent was to describe Ethernet purchases and connections.[3] The law is also very much related to economics and business management, especially with competitive companies looking to merge with one another. Network effects[edit]

Terminal Concepts in GNU/Linux Copyright © 2003 Charles M. "Chip" Coldwell. Terminal Concepts in Linux Introduction View model The TEAF Matrix of Views and Perspectives. A view model or viewpoints framework in systems engineering, software engineering, and enterprise engineering is a framework which defines a coherent set of views to be used in the construction of a system architecture, software architecture, or enterprise architecture. A view is a representation of a whole system from the perspective of a related set of concerns.[1][2] Since the early 1990s there have been a number of efforts to prescribe approaches for describing and analyzing system architectures. These recent efforts define a set of views (or viewpoints).

Thinking Networks II First presented to The Developing Group on 3 June 2006 (an earlier version, Thinking Networks I, was presented on on 5 June 2004) Thinking Networks II James Lawley Contents Dagger vs. Guice - Floating Sun If you are familiar with dependency injection and you are in Java-land, you've probably heard of Google Guice. You may even have heard of this new D-I framework from the fine folks at Square, called Dagger. We have a sizeable codebase that uses Guice heavily, but I'm a sucker for shiny new things so I started playing with Dagger to see what it would take to migrate away from Guice. Read on to learn more. Why Dagger?