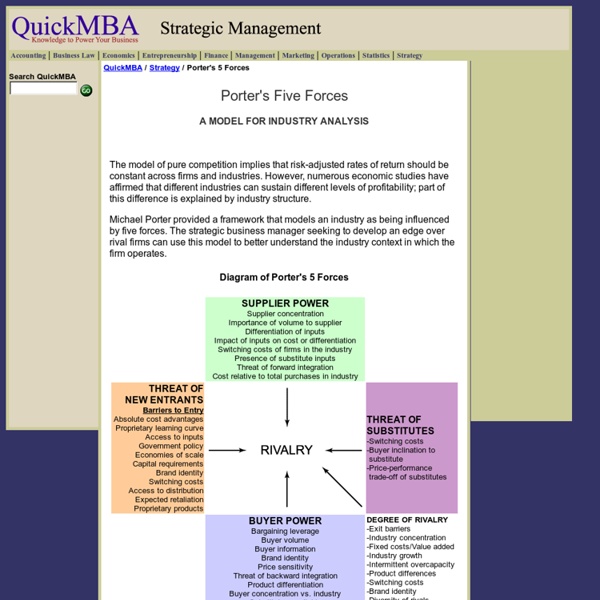 The model of pure competition implies that risk-adjusted rates of return should be constant across firms and industries. However, numerous economic studies have affirmed that different industries can sustain different levels of profitability; part of this difference is explained by industry structure. Michael Porter provided a framework that models an industry as being influenced by five forces. The strategic business manager seeking to develop an edge over rival firms can use this model to better understand the industry context in which the firm operates. I. In the traditional economic model, competition among rival firms drives profits to zero. Economists measure rivalry by indicators of industry concentration. If rivalry among firms in an industry is low, the industry is considered to be disciplined. When a rival acts in a way that elicits a counter-response by other firms, rivalry intensifies. In pursuing an advantage over its rivals, a firm can choose from several competitive moves:

Creating a Public Service Announcement This page is archived material and is no longer updated. It may contain outdated information and broken links. The material presented on these pages is the product of five regional symposia held on restorative justice between June 1997 and January 1998. Media Relations Methods, Source: National Victim Center, 1990 Public service announcements provide your community with powerful public service messages about victims' rights at no cost to your organization. Public service announcements (PSA's) can be utilized in three mediums: Newspaper (print PSA's); Radio (audio PSA's); and Television (video PSA's). PSA can deliver messages about your organization, its activities, or victims' rights issues in general. PSA's target different news mediums, as well as different audiences. PSA's are a valuable "freebie" to victims' rights advocates. There is a great deal of competition among non-profit organizations for public service announcement time and space. Print Public Service Announcements