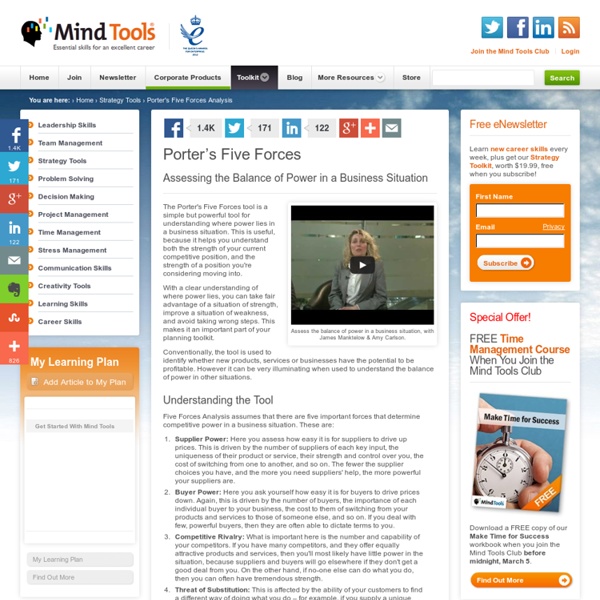 Assessing the Balance of Power in a Business Situation Assess the balance of power in a business situation, with James Manktelow & Amy Carlson. The Porter's Five Forces tool is a simple but powerful tool for understanding where power lies in a business situation. This is useful, because it helps you understand both the strength of your current competitive position, and the strength of a position you're considering moving into. With a clear understanding of where power lies, you can take fair advantage of a situation of strength, improve a situation of weakness, and avoid taking wrong steps. This makes it an important part of your planning toolkit. Conventionally, the tool is used to identify whether new products, services or businesses have the potential to be profitable. Understanding the Tool Five Forces Analysis assumes that there are five important forces that determine competitive power in a business situation. From "How Competitive Forces Shape Strategy" by Michael E. Using the Tool

Startup Post-Mortems Offer All Sorts Of Surprising Lessons Startup "success" is a matter of luck and timing--but mostly it's a matter of persistence. Companies that fail don't usually do so by objective measures--they just become so miserable to operate that the founders decide to euthanize it. CB Insights collected 51 accounts of startup failures in multiple industries from 2007 to the present day to try to make sense of what compels people to pull the parachute in their early stage venture. After reading them all, I thought startup founder Brianne Garcia summed up the struggle well in her obituary for her company Parceld:

One-Sentence Financial Rules There are 56,956 personal finance books on Amazon.com. In aggregate, they contain more than 3 billion words. This seems absurd, because 99% of personal finance can be summarized in nine words: Work a lot, spend a little, invest the difference. Master that, and the other 2.999 billion words are filler. The most important finance topics don't require details.

5 Reasons Why You Will Remain A Wantrepreneur Rahul Varshneya is the co-founder of Arkenea Technologies and a mobile strategy advisor. He can be contacted via Twitter @rahulvarshneya. Aspiring entrepreneurs often don’t even start up. The 10 Traits Of Extremely Successful People Success is something that all of us wish to attain. But if it were so easy, everyone who wanted it would have it – it’s relative elusiveness is what makes it special. It’s exclusive to a handful of people who did extraordinary things in their lives to get them to where they are today. And it wasn’t because they were lucky or because it was just handed to them. Most successful people in this world started from the bottom and worked their way up in life.

6-avoidable-mistakes-entrepreneurs-make Being an entrepreneur is difficult enough without falling prey to easily avoidable problems, according to Jeff Busgang, whose career spans starting companies on his won to funding them as a venture capitalist at Flybridge Capital Partners. Here are the six common errors he identified, along with suggestions for avoiding them: 1. Fighting fires rather than scaling up James Clear: The Key to Exceptional Achievement: What is Your "Average Speed" in Life? Click here to read an original op-ed from the TED speaker who inspired this post and watch the TEDTalk below. In 2008, David Blaine set a Guinness World Record by holding his breath underwater for 17 minutes. During the TEDTalk about his record-setting performance, Blaine describes one particular period of his training leading up to the world record as follows... "Every morning, and this is for months, I would wake up and the first thing that I would do is I would hold my breath ... I'd breathe really hard for a minute and then I would hold immediately for five and half minutes.

why-most-start-ups-fail Why do some start-ups succeed while similar start-ups with similar products languish and die? The difference is in the quality of their sales and marketing, according to Gerhard Gschwandtner, publisher of Selling Power magazine. He observes that many entrepreneurs--especially those with an engineering background--are lack much understanding of the basic skills required to bring a product to successfully to market. The 5 Most Motivating Words and Phrases that will Get People to Even Die For You In management training , we often say people don’t remember what a manager does for them, but what he says will be remembered for life. So instead of saying de-motivating things, why not say things that are so powerfully motivating and inspiring that will get people to die for you? The following 5 are what we often teach in our courses: I would like to hear your opinion . Wow, people love to be seen as important and know that their views really matter.

7 Reasons Why Your Startup Will Fail (And How to Soften the Blow) Rahul Varshneya is the co-creator of Foster.fm, a platform that helps startups grow their business through social media. If you’re going to start up, you are bound to fail. This is not a primer to make sure you succeed, as there are many factors that can contribute to failure.