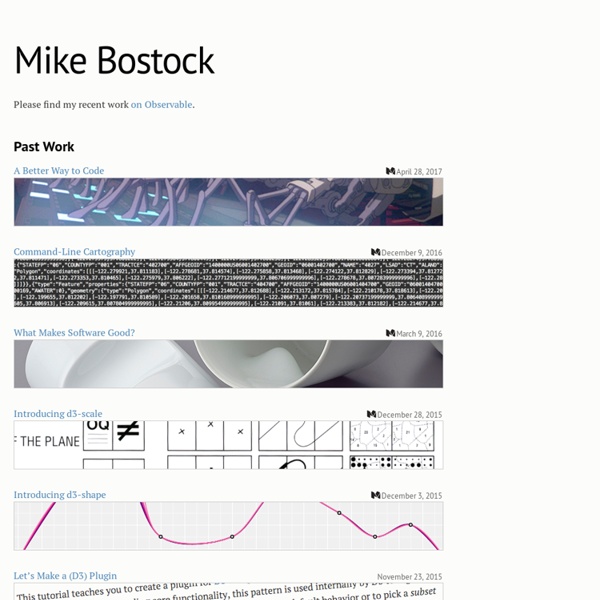 How Selections Work Any sufficiently advanced technology is indistinguishable from magic. –Arthur C. Clarke In the past I have presented simplified descriptions of D3’s selections, providing only enough detail to get started. This article takes a more comprehensive approach; rather than saying how to use selections, I will explain how selections are implemented. This may take longer to read, but it should dispel any magic and help you master data-driven documents. feltron Mapping Neighborhoods in Boston, San Francisco and New York. Hand-drawn animation of 43 years of the Sun’s weather. (via kottke) William Stone Branching Drawings (identified by wowgreat) Geometric choropleths 1895 vs 1978 Fisher–Yates Shuffle Say you had a fresh pack of cards: If you want to play a game of Texas Hold ‘em with friends, you should shuffle the deck first to randomize the order and insure a fair game. But how? A simple but effective way of doing this is to pull a random card from the deck repeatedly and set it aside, incrementally building a new stack. As long as you pick each remaining card from the deck with equal probability, you’ll have a perfectly-unbiased random stack when you’re done: But let’s say instead of a physical deck of cards, you wanted to write code to perform this same task with an in-memory array of n elements.

37 tools It's often said that data is the new world currency, and the web is the exchange bureau through which it's traded. As consumers, we're positively swimming in data; it's everywhere from labels on food packaging design to World Health Organisation reports. As a result, for the designer it's becoming increasingly difficult to present data in a way that stands out from the mass of competing data streams. Get Adobe Creative Cloud One of the best ways to get your message across is to use a visualization to quickly draw attention to the key messages, and by presenting data visually it's also possible to uncover surprising patterns and observations that wouldn't be apparent from looking at stats alone. And nowadays, there's plenty of free graphic design software to help you do just that.

Planning and management charts Share RGraph: Planning and management charts Funnel charts Shows decreasing (or increasing) quantities progressing through a process Tooltips, custom events, resizable, zoom, context menu, annotatable Key Visual effects Crossfilter Fast Multidimensional Filtering for Coordinated Views Crossfilter is a JavaScript library for exploring large multivariate datasets in the browser. Crossfilter supports extremely fast (<30ms) interaction with coordinated views, even with datasets containing a million or more records; we built it to power analytics for Square Register, allowing merchants to slice and dice their payment history fluidly. Since most interactions only involve a single dimension, and then only small adjustments are made to the filter values, incremental filtering and reducing is significantly faster than starting from scratch. Crossfilter uses sorted indexes (and a few bit-twiddling hacks) to make this possible, dramatically increasing the perfor­mance of live histograms and top-K lists.

7 Interactive Resumes That Shame Your Paper Version In the wild, animals competing for the same thing scare off the competition with grand displays of dominance. The same goes for your job search. We're not saying you should wear a fluorescent suit to an interview or pee on the interviewer's shoes, but the right amount of showiness can go a long way in the business world, starting with your resume. An interactive resume gives you more control over your first impression, showcasing who you are instead of just what you've done.