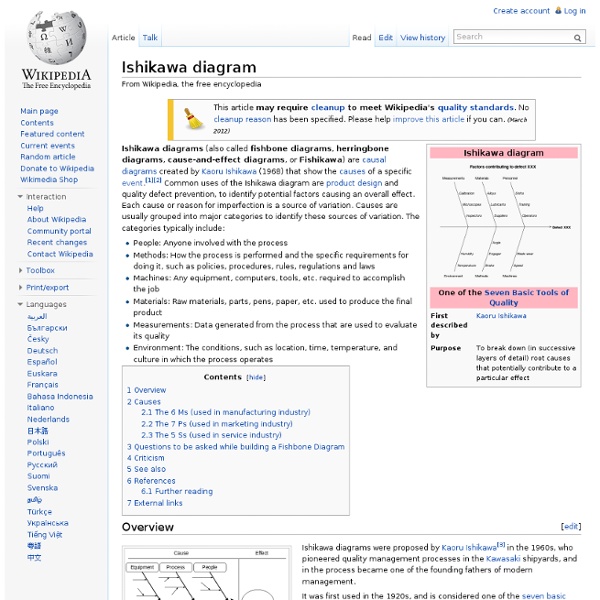 Ishikawa diagrams (also called fishbone diagrams, herringbone diagrams, cause-and-effect diagrams, or Fishikawa) are causal diagrams created by Kaoru Ishikawa (1968) that show the causes of a specific event.[1][2] Common uses of the Ishikawa diagram are product design and quality defect prevention, to identify potential factors causing an overall effect. Each cause or reason for imperfection is a source of variation. Causes are usually grouped into major categories to identify these sources of variation. The categories typically include: Overview[edit] Ishikawa diagram, in fishbone shape, showing factors of Equipment, Process, People, Materials, Environment and Management, all affecting the overall problem. Ishikawa diagrams were popularized by Kaoru Ishikawa[3] in the 1960s, who pioneered quality management processes in the Kawasaki shipyards, and in the process became one of the founding fathers of modern management. Causes[edit] Causes can be derived from brainstorming sessions.

Analysis of variance Analysis of variance (ANOVA) is a collection of statistical models used to analyze the differences between group means and their associated procedures (such as "variation" among and between groups), developed by R.A. Fisher. In the ANOVA setting, the observed variance in a particular variable is partitioned into components attributable to different sources of variation. In its simplest form, ANOVA provides a statistical test of whether or not the means of several groups are equal, and therefore generalizes the t-test to more than two groups. Doing multiple two-sample t-tests would result in an increased chance of committing a type I error. Motivating example[edit] No fit. Fair fit Very good fit The analysis of variance can be used as an exploratory tool to explain observations. Background and terminology[edit] ANOVA is a particular form of statistical hypothesis testing heavily used in the analysis of experimental data. "Classical ANOVA for balanced data does three things at once: Blocking

NodeMind: Software for planning, visualization and scheme design Wikiversity Statistical hypothesis testing A statistical hypothesis test is a method of statistical inference using data from a scientific study. In statistics, a result is called statistically significant if it has been predicted as unlikely to have occurred by chance alone, according to a pre-determined threshold probability, the significance level. The phrase "test of significance" was coined by statistician Ronald Fisher.[1] These tests are used in determining what outcomes of a study would lead to a rejection of the null hypothesis for a pre-specified level of significance; this can help to decide whether results contain enough information to cast doubt on conventional wisdom, given that conventional wisdom has been used to establish the null hypothesis. Variations and sub-classes[edit] Statistical hypothesis testing is a key technique of both Frequentist inference and Bayesian inference although they have notable differences. The testing process[edit] An alternative process is commonly used: Interpretation[edit] Example[edit]

P-value In statistical significance testing, the p-value is the probability of obtaining a test statistic result at least as extreme as the one that was actually observed, assuming that the null hypothesis is true.[1][2] A researcher will often "reject the null hypothesis" when the p-value turns out to be less than a certain significance level, often 0.05 or 0.01. Such a result indicates that the observed result would be highly unlikely under the null hypothesis. Many common statistical tests, such as chi-squared tests or Student's t-test, produce test statistics which can be interpreted using p-values. In a statistical test, the p-value is the probability of getting the same value for a model built around two hypotheses, one is the "neutral" (or "null") hypothesis, the other is the hypothesis under testing. An informal interpretation with a significance level of about 10%: Definition[edit] Example of a p-value computation. is the observed data and , then (right tail event) or and interval. .

Dunning–Kruger effect Cognitive bias about one's own skill The Dunning–Kruger effect is a hypothetical cognitive bias stating that people with low ability at a task overestimate their own ability, and that people with high ability at a task underestimate their own ability. As described by social psychologists David Dunning and Justin Kruger, the bias results from an internal illusion in people of low ability and from an external misperception in people of high ability; that is, "the miscalibration of the incompetent stems from an error about the self, whereas the miscalibration of the highly competent stems from an error about others".[1] It is related to the cognitive bias of illusory superiority and comes from people's inability to recognize their lack of ability. The effect, or Dunning and Kruger's original explanation for the effect, has been challenged by mathematical analyses[2][3][4][5][6][7] and comparisons across cultures.[8][9] Original study[edit] Later studies[edit] Mathematical critique[edit]

Process performance index , and the estimated variability of the process (expressed as a standard deviation) is , then the process performance index is defined as: is estimated using the sample standard deviation. Ppk may be negative if the process mean falls outside the specification limits (because the process is producing a large proportion of defective output). Some specifications may only be one sided (for example, strength). ; for those that only have an upper limit, Practitioners may also encounter , a metric that does not account for process performance that is not exactly centered between the specification limits, and therefore is interpreted as what the process would be capable of achieving if it could be centered and stabilized. Interpretation[edit] Larger values of Ppk may be interpreted to indicate that a process is more capable of producing output within the specification limits, though this interpretation is controversial. and Example[edit] If are estimated to be 99.61 μm and 1.84 μm, respectively, then

Control chart Control charts, also known as Shewhart charts (after Walter A. Shewhart) or process-behavior charts, in statistical process control are tools used to determine if a manufacturing or business process is in a state of statistical control. Overview[edit] If analysis of the control chart indicates that the process is currently under control (i.e., is stable, with variation only coming from sources common to the process), then no corrections or changes to process control parameters are needed or desired. The control chart is one of the seven basic tools of quality control.[3] Typically control charts are used for time-series data, though they can be used for data that have logical comparability (i.e. you want to compare samples that were taken all at the same time, or the performance of different individuals), however the type of chart used to do this requires consideration.[4] History[edit] The control chart was invented by Walter A. Chart details[edit] A control chart consists of: 1. 2. 3.

W. Edwards Deming William Edwards Deming (October 14, 1900 – December 20, 1993) was an American engineer, statistician, professor, author, lecturer, and management consultant. Educated initially as an electrical engineer and later specializing in mathematical physics, he helped develop the sampling techniques still used by the U.S. Department of the Census and the Bureau of Labor Statistics. In his book, The New Economics for Industry, Government, and Education,[1] Deming championed the work of Walter Shewhart, including statistical process control, operational definitions, and what Deming called the "Shewhart Cycle"[2] which had evolved into Plan-Do-Study-Act (PDSA). Better design of products to improve serviceHigher level of uniform product qualityImprovement of product testing in the workplace and in research centersGreater sales through side [global] markets Deming is best known in the United States for his 14 Points (Out of the Crisis, by W. Overview[edit] In 1993, he founded the W. Family[edit] Dr.

5S (methodology) Tools drawer at a 5S working place 5S is the name of a workplace organization method that uses a list of five Japanese words: seiri, seiton, seiso, seiketsu, and shitsuke. Transliterated or translated into English, they all start with the letter "S".[1] The list describes how to organize a work space for efficiency and effectiveness by identifying and storing the items used, maintaining the area and items, and sustaining the new order. The decision-making process usually comes from a dialogue about standardization, which builds understanding among employees of how they should do the work. There are five primary 5S phases: They can be translated from the Japanese as Sort, Systematize, Shine, Standardize and Self-Discipline. Remove unnecessary items and dispose of them properlyMake work easy by eliminating obstaclesProvide no chance of being disturbed with unnecessary itemsPrevent accumulation of unnecessary items Other phases are sometimes included e.g. safety, security, and satisfaction.

Failure mode and effects analysis Failure mode and effects analysis (FMEA)—also "failure modes," plural, in many publications—was one of the first systematic techniques for failure analysis. It was developed by reliability engineers in the late 1940s to study problems that might arise from malfunctions of military systems. An FMEA is often the first step of a system reliability study. A few different types of FMEA analyses exist, such as Functional,Design, andProcess FMEA. Sometimes FMEA is extended to FMECA to indicate that criticality analysis is performed too. FMEA is an inductive reasoning (forward logic) single point of failure analysis and is a core task in reliability engineering, safety engineering and quality engineering. A successful FMEA activity helps to identify potential failure modes based on experience with similar products and processes - or based on common physics of failure logic. Introduction[edit] Functional analysis[edit] Ground rules[edit] Benefits[edit] Basic terms :-[edit] Failure Failure mode End effect