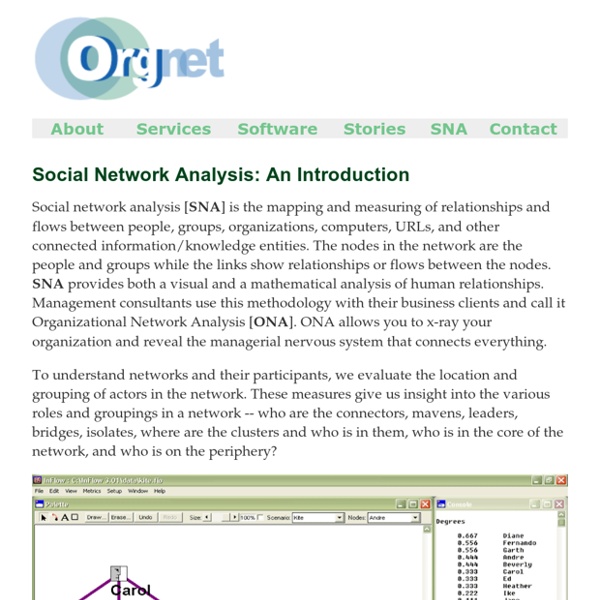 Social network analysis [SNA] is the mapping and measuring of relationships and flows between people, groups, organizations, computers, URLs, and other connected information/knowledge entities. The nodes in the network are the people and groups while the links show relationships or flows between the nodes. SNA provides both a visual and a mathematical analysis of human relationships. Management consultants use this methodology with their business clients and call it Organizational Network Analysis [ONA]. ONA allows you to x-ray your organization and reveal the managerial nervous system that connects everything. To understand networks and their participants, we evaluate the location and grouping of actors in the network. We look at a social network -- the "Kite Network" above -- developed by David Krackhardt, a leading researcher in social networks. Degree Centrality Betweenness Centrality Closeness Centrality Network Centralization Network Reach Not all network paths are created equal.

Social Media Toolkit This is a collection of tips, recommendations, tools and pieces of social media best practice. Compiled by The Open University's Social Media Team, it’s primarily aimed at colleagues who use social media in a professional capacity. This includes: People managing accounts as The Open UniversityPeople managing accounts as a nation, faculty, department, unit or any other part of the OUAcademic staff with personal accounts who post about their work

What does it mean to be posthuman? By David Cohen HOW would you like to be a posthuman? You know, a person who has gone beyond the “maximum attainable capacities by any current human being without recourse to new technological means”, as philosopher Nick Bostrum of the Future of Humanity Institute at the University of Oxford so carefully described it in a recent paper. In other words, a superbeing by today’s standards. If this sounds like hyperbole, bear with me.

Introduction to social network methods Robert A. Hanneman and Mark Riddle Introduction to social network methods About - Digital Media Research Centre Our vision The Digital Media Research Centre (DMRC) conducts world-leading research that helps society understand and adapt to the social, cultural and economic transformations associated with digital media technologies. Aims and objectives Digital media have become a near-ubiquitous part of our everyday lives. Debates in the Digital Humanities 2011, tools, quarterly, victoria, now, jobs, projects, startup grant, companion, blog —Top ten Google Instant appendages to a search on “digital humanities” as of April 28, 2011, 10:35 AM EDT This Strange Confluence Digital humanities is a tactical term. In a previous essay, “What Is Digital Humanities and What’s It Doing in English Departments?” I suggested that for those seeking to define digital humanities, the then-current Wikipedia definition (and top Google hit) served about as well as any and could save a lot of headache and, second, that the term “digital humanities” itself has a specific, recoverable history, originating with circumstances (which I documented) having primarily to do with marketing and uptake, and, third, that the term is now being “wielded instrumentally” by those seeking to effect change “amid the increasingly monstrous institutional terrain” of the contemporary academy.

Intelligent Archive / Centre for Literary and Linguistic Computing / Research Institutes, Centres & Groups / Research / Humanities and Social Science / Schools Developed at the Centre for Literary and Linguistic Computing , University of Newcastle, Australia Hugh Craig R Whipp, Michael Ralston Media Commentary — Callie Schweitzer How We Internet: Finding the right news among too many options: The days of waiting for the newspaper thud outside the front door are over, and it’s no longer up to the editors of the New York Times to decide the lead story of the day. The process of getting news involves more choice than ever.

Reflections on Black Mirror – by those for whom science fiction became reality Warning: this article contains some spoilers. Hated in the Nation Hated in the Nation is Black Mirror’s excursion into public shame: it takes a series of targets who have brought disapprobation upon themselves. One is a columnist who slates a disabled person; another, an X Factor style judge who scorns a nine-year-old; a protestor who pretends to urinate on a war memorial; a politician so closely modelled on George Osborne that it made me feel nostalgic for a pre-Brexit age, when he was the summit of Tory obnoxiousness. They all find themselves in the eye of a Twitter storm, only this time it’s for real – the anger doesn’t crescendo then vanish.

Introduction and guide A short video guide to this site and to the Caqdas Networking Project site. This site is designed for several different kinds of user who have questions about QDA (qualitative data analysis) and CAQDAS (Computer Assisted Qualitative Data AnalysiS) programs. The links below are for some of these categories of users. Joho the BlogJoho the Blog - Let's just see what happens The hosts of the BardCast podcast consider Cymbeline to probably be Shakespeare’s worst play. Not enough happens in the first two acts, the plot is kuh-razy, it’s a mishmash of styles and cultures, and it over-explains itself time and time again. That podcast is far from alone in thinking that it’s the Bard’s worst, although, as BardCast says, even the Bard’s worst is better than just about anything. Nevertheless, when was the last time you saw a performance of Cymbeline? Yeah, me neither.

General Social Survey The GSS contains a standard 'core' of demographic, behavioral, and attitudinal questions, plus topics of special interest. Many of the core questions have remained unchanged since 1972 to facilitate time-trend studies as well as replication of earlier findings. The GSS takes the pulse of America, and is a unique and valuable resource. It has tracked the opinions of Americans over the last four decades. Trends