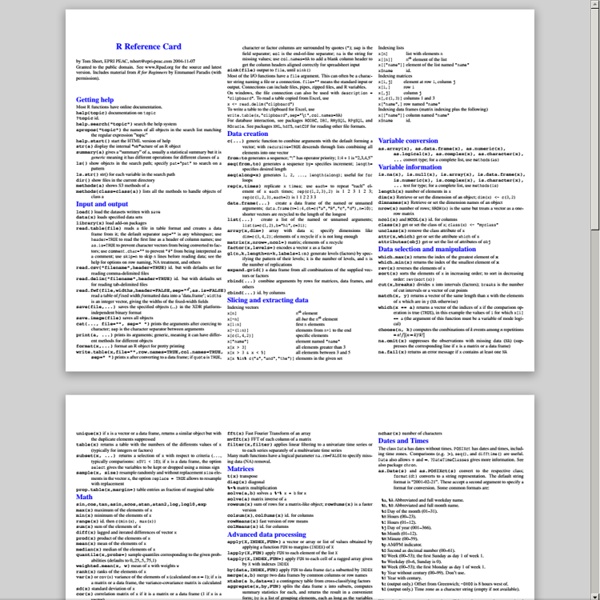 Learning R Bash Reference Manual Table of Contents This text is a brief description of the features that are present in the Bash shell (version 4.2, 28 December 2010). This is Edition 4.2, last updated 28 December 2010, of The GNU Bash Reference Manual, for Bash, Version 4.2. Bash contains features that appear in other popular shells, and some features that only appear in Bash. This manual is meant as a brief introduction to features found in Bash. 1 Introduction 1.1 What is Bash? Bash is the shell, or command language interpreter, for the GNU operating system. Bash is largely compatible with sh and incorporates useful features from the Korn shell ksh and the C shell csh. While the GNU operating system provides other shells, including a version of csh, Bash is the default shell. 1.2 What is a shell? At its base, a shell is simply a macro processor that executes commands. A Unix shell is both a command interpreter and a programming language. Shells may be used interactively or non-interactively. 2 Definitions blank builtin job

Quick-R: Home Page Summer 2010 — R: ggplot2 Intro Contents Intro When it comes to producing graphics in R, there are basically three options for your average user. base graphics I've written up a pretty comprehensive description for use of base graphics here, and don't intend to extend beyond that. Both and make creating plots of multivariate data easier. The website for ggplot2 is here: Basics is meant to be an implementation of the Grammar of Graphics, hence gg-plot. Plots convey information through various aspects of their aesthetics. x position y position size of elements shape of elements color of elements The elements in a plot are geometric shapes, like points lines line segments bars text Some of these geometries have their own particular aesthetics. points point shape point size lines line type line weight bars y minimum y maximum fill color outline color text label value The values represented in the plot are the product of various statistics. Layer by Layer Displaying Statistics

Shortcuts to move faster in Bash command line - teohm.dev Nowadays, I spend more time in Bash shell, typing longer commands. One of my new year resolutions for this year is to stop using left/right arrow keys to move around in the command line. I learned a few shortcuts a while ago. Last night, I spent some time to read about “Command Line Editing” in the bash manual. Well, here’s the new shortcuts I learned: Basic moves Move back one character. Moving faster Move to the start of line. What is Meta? Cut and paste (‘Kill and yank’ for old schoolers) Cut from cursor to the end of line. Search the command history Search as you type. Need more? A comprehensive bash editing mode cheatsheet by Peteris Krumin (catonmat.net).Vim users!

Cookbook for R » Cookbook for R developers:projects:gsoc2012:ropensci Summary: Dynamic access and visualization of scientific data repositories Description: rOpenSci is a collaborative effort to develop R-based tools for facilitating Open Science. Projects in rOpenSci fall into two categories: those for working with the scientific literature, and those for working directly with the databases. Visit the active development hub of each project on github, where you can see and download source-code, see updates, and follow or join the developer discussions of issues. Most of the packages work through an API provided by the resource (database, paper archive) to access data and bring it within reach of R’s powerful manipulation. See a complete list of our R packages currently in development. The student could choose to work on a package for a particular data repository of interest, or develop tools for visualization and exploration that could function across the existing packages.