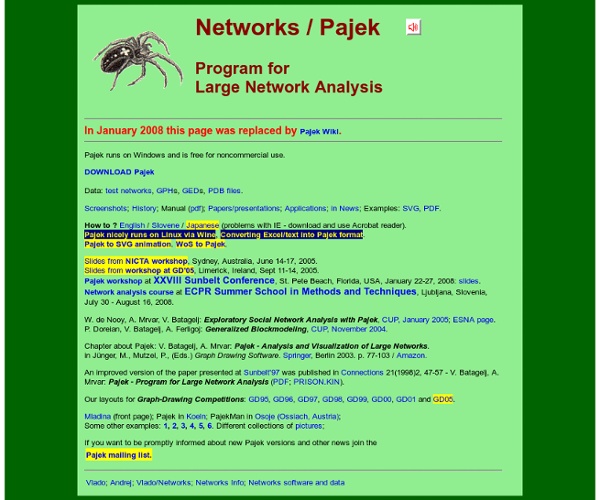 In January 2008 this page was replaced by Pajek Wiki. Pajek runs on Windows and is free for noncommercial use. DOWNLOAD Pajek Data: test networks, GPHs, GEDs, PDB files. Screenshots; History; Manual (pdf); Papers/presentations; Applications; in News; Examples: SVG, PDF. How to ? Slides from NICTA workshop, Sydney, Australia, June 14-17, 2005. W. de Nooy, A. Chapter about Pajek: V. An improved version of the paper presented at Sunbelt'97 was published in Connections 21(1998)2, 47-57 - V. Our layouts for Graph-Drawing Competitions: GD95, GD96, GD97, GD98, GD99, GD00, GD01 and GD05. Mladina (front page); Pajek in Koeln; PajekMan in Osoje (Ossiach, Austria); Some other examples: 1, 2, 3, 4, 5, 6. If you want to be promptly informed about new Pajek versions and other news join the

yEd - Graph Editor yEd is a powerful desktop application that can be used to quickly and effectively generate high-quality diagrams. Create diagrams manually, or import your external data for analysis. Our automatic layout algorithms arrange even large data sets with just the press of a button. yEd is freely available and runs on all major platforms: Windows, Unix/Linux, and Mac OS X. GraphChi Disk-based large-scale graph computation Introduction GraphChi(huahua) is a spin-off of the GraphLab(rador) project. GraphChi can run very large graph computations on just a single machine, by using a novel algorithm for processing the graph from disk (SSD or hard drive). Microsoft sample showcases new technology, innovation in genealogy software Microsoft sample showcases new technology, innovation in genealogy software What started out as a sample application to showcase the latest UI technology from Microsoft called Windows Presentation Foundation (WPF) resulted in a sample to the genealogy community of innovation. At the beginning of this year, the company I work for hired Vertigo Software to do a prototype application using WPF. Part of the portfolio that Vertigo shared with us during the pre-hiring phase was an end-to-end reference sample that they did for Microsoft. The exciting thing about this sample is that it is a genealogy application. Family.Show version 1 was released in April in preparation for the MIX 07 conference and version 2 was released in July.

Bibliography(bib) Peer-reviewed article Titre PORGY: A Visual Graph Rewriting Environment for Complex Systems Auteurs DyNet Software The purpose of the DyNet project is to develop the equivalent of a flight simulator for reasoning about dynamic networked organizations. Through a unique blending of computer science, social networks and organization theory we are creating a new class of tools for managing organizational dynamics. The core tool is DyNet - a reasoning support tool for reasoning under varying levels of uncertainty about dynamic networked and cellular organizations, their vulnerabilities, and their ability to reconstitute themselves. Using DyNet the analyst would be able to see how the networked organization was likely to evolve if left alone, how its performance could be affected by various information warfare and isolation strategies, and how robust those strategies were in the face of varying levels of information assurance. Click here for more comprehensive pages on DyNet

Social Network Analysis About the Course Everything is connected: people, information, events and places, all the more so with the advent of online social media. A practical way of making sense of the tangle of connections is to analyze them as networks. In this course you will learn about the structure and evolution of networks, drawing on knowledge from disciplines as diverse as sociology, mathematics, computer science, economics, and physics. Skyrails Skyrails is a Social Network and Graph Visualization System with a built-in programming language. The system is not solely aimed at expert users, since through other scripting languages, menus can be built and the system used by a wider audience. Also, as Yose Widjaja affirms, the language is pretty easy to learn. However, because the software is currently on beta mode, there is not much documentation for the language and hence self-learning and guessing is the only way to go for now. Yose says this will change in the future.

Find Your Influencers : KXEN Find Your Influencers It’s no assumption that people socialize into groups. By using business data, we can learn about the links between our customers and just as importantly, which customers have a strong social influence. We can use this insight to create a competitive advantage. How can you build a social network? Text Network Analysis Text network analysis allows one to quickly visualize the meanings and agendas present within a text, live conversation, broadcast, or interview. Our method is different to semantic network analysis. Instead, we focus predominantly on the relationships and clusters of meaning present within the text, uncovering what we call the pathways for meaning circulation