Allan Savory: How to green the world's deserts and reverse climate change 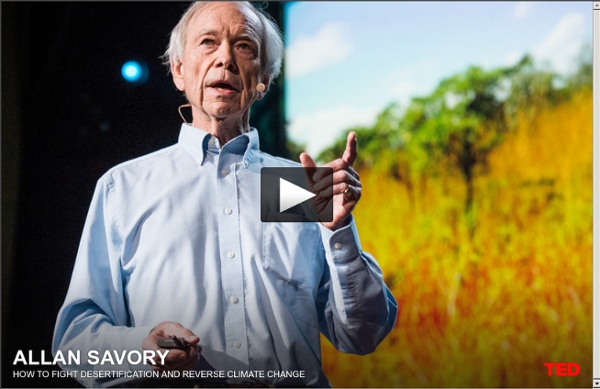 How to Start a Small Permaculture Tree Nursery Recently I attended a farm forestry course with David Holmgren and Darren J. Doherty, a subject I’d like to address today. To even start a farm forestry operation, or even a permaculture orchard, you’ll need to source a huge number of trees from somewhere. I crunched a few numbers and browsed the relevant websites: it seems that small bare-root trees will cost, on average, $20 or more, an amount that will soon add up. I realised that, even excluding overseeding and site preparation, I would need to pay around $20k/acre for my permaculture orchard.

Allan Savory’s TED talk is wrong, and the benefits of holistic grazing have been debunked. Photo by Vyacheslav Oseledko/AFP/Getty Images When Allan Savory finished his TED talk early last month, foodies worldwide collectively salivated. In roughly 22 minutes, Savory, a biologist and former member of the Rhodesian Parliament, challenged the conventional wisdom blaming livestock for the degradation of global grasslands into hardpan deserts. It has long been a basic tenet of environmentalism that 10,000 years of overgrazing has caused this desertification. Environmentalists insist that to restore degraded landscapes, we must reduce the presence of cattle, eat less meat, and allow ecosystems to repair themselves. Lecture to Oxford Farming Conference, 3 January 2013 [Comments are now closed - it was getting impossible to manage them given the volume.] Chinese translation… Italian translation… German translation… Spanish translation… French translation… Vietnamese translation (shortened)… Italian version (also shortened) Thai version and Slovak version. NEW – Portuguese translation.

Regrarian Handbook *1. CLIMATE CHAPTER’ eHANDBOOK (77 pages) available NOW for only AUD$5!! *ON SALE as a FULL HARDCOPY late-2015!! The ‘Regrarians Handbook’ is a succinct & sequential outline of over 300 integrated methodologies and techniques that have been proven over many years of universal application to work towards regenerating human & livestock’s lives along with production landscapes. It does so in a wholly practical, positive & pragmatic fashion, promising to be a relatively ageless tome that generations of users will refer to as they negotiate the design, development & management of systems they operate. Darren has joined forces with ‘Permaculture: A Designers’ Manual‘ (1988) Designer, Illustrator & Editor Andrew Jeeves in what promises to be the production of an ‘instant classic’.

Perennial Vegetables to Plant Once and Enjoy For Years To Come!!! Perennial vegetables—crops that you plant just once and harvest year after year—are relatively rare in North American gardens. With the exception of asparagus, rhubarb and artichokes, most gardeners are probably unaware of the tasty, extremely low-maintenance bounty that can be harvested when many annual crops aren’t available. A Brief History of Perennial Crops According to Perennial Vegetables by Eric Toensmeier, most North American gardening and farming traditions come from Europe, where there are very few perennial crops except fruits and nuts. Cold and temperate Eurasian agriculture centered around livestock, annual grains and legumes, and early European settlers to North America simply brought their seeds and their cultivation methods with them, including draft animals for plowing up the soil every year. However, in more temperate and tropical areas of the world, including much of North America, perennial root, starch and fruit crops were actively bred, selected and cultivated.

‘Chasing Ice’ changed this climate-denying Bill O’Reilly listener into a believer Whenever you feel discouraged about working to fix global warming and convince people that it’s a real problem, watch this video: In the documentary Chasing Ice, filmmaker James Balog shot photos of glaciers in Iceland, Greenland, and Alaska at 30-minute intervals for months and months. As Grist has reported: The resulting time-lapse movie can condense months and years into a few mesmerizing moments. Now we can watch the canary in the coal mine as it expires.

Permaculture Courses One of Permaculture’s Holy Cows: the Death of the Swale - Permaculture Courses ‘The best place to store water is in the soil.’ When I first heard this saying, early on in my permaculture education, it was like a light bulb coming on. It just seemed so obviously true. After a couple of decades of practicing permaculture I realise that any blanket statement like that is almost certain to be wrong or at least only right in certain places and at certain times. Biochar Biochar created through the pyrolysis process. History[edit] Left - a nutrient-poor oxisol; right - an oxisol transformed into fertile terra preta using biochar

Oh, Snapchat: Your smartphone just became a climate scientist This is part of a series exploring how collective intelligence can create a better world. Read the whole series here. Picture this: You’re out on a hike in Mt. Diablo State Park, just outside San Francisco. Upon reaching a nice viewpoint, you think, “Hey, this would look pretty sweet on my Instagram feed.”