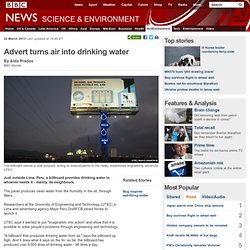 The panel produces clean water from the humidity in the air, through filters. Researchers at the University of Engineering and Technology (UTEC) in Lima and advertising agency Mayo Peru DraftFCB joined forces to launch it. UTEC says it wanted to put "imagination into action" and show that it is possible to solve people's problems through engineering and technology. New tech makes water from air. MANILA, Philippines - Safe drinking water out of thin air? 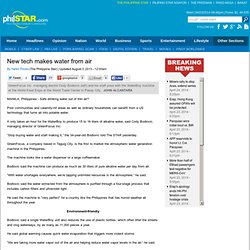 Poor communities and calamity-hit areas as well as ordinary households can benefit from a US technology that turns air into potable water. It only takes an hour for the WaterBoy to produce 15 to 16 liters of alkaline water, said Cody Bodlovic, managing director of GreenFocus Inc. “Stop buying water and start making it,” the 34-year-old Bodlovic told The STAR yesterday. GreenFocus, a company based in Taguig City, is the first to market the atmospheric water generation machine in the Philippines. The machine looks like a water dispenser or a large coffeemaker. Homepage ( Article MRec ), pagematch: 1, sectionmatch: 1 Bodlovic said the machine can produce as much as 30 liters of pure alkaline water per day from air.

“With water shortages everywhere, we’re tapping unlimited resources in the atmosphere,” he said. He said the machine is “very perfect” for a country like the Philippines that has humid weather all throughout the year. Can We End the Global Water Crisis? Last month I had an opportunity to give a TEDx talk on my home campus at UC Irvine. 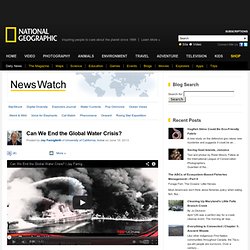 Mine was called “Can We End the Global Water Crisis?” I’d like to share my views on this topic with our Water Currents readers by posting several excerpts, more or less straight from the talk. “Can we end the global water crisis? … No, we can’t end it. The Looming Threat of Water Scarcity. Some 1.2 billion people—almost a fifth of the world—live in areas of physical water scarcity, while another 1.6 billion face what can be called economic water shortage. 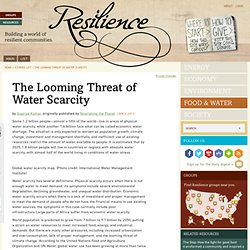 The situation is only expected to worsen as population growth, climate change, investment and management shortfalls, and inefficient use of existing resources restrict the amount of water available to people. Act now to avert a global water crisis - opinion - 24 May 2013. We desperately need joined-up thinking by the world's leaders to secure future water supplies, say Charles Vörösmarty and Claudia Pahl-Wostl Earth is often described as the blue planet, suggesting that there is plenty of water. 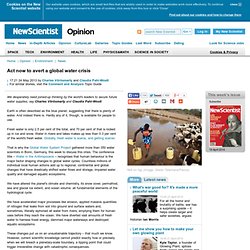 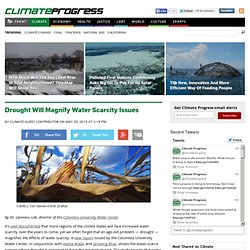 Carl Ganter/Circle of Blue By Dr. Global majority faces water shortages 'within two generations' The majority of the 9 billion people on Earth will live with severe pressure on fresh water within the space of two generations as climate change, pollution and over-use of resources take their toll, 500 scientists have warned. 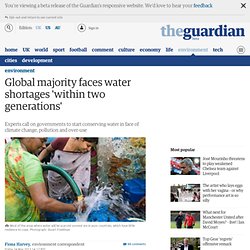 The world's water systems would soon reach a tipping point that "could trigger irreversible change with potentially catastrophic consequences", more than 500 water experts warned on Friday as they called on governments to start conserving the vital resource. They said it was wrong to see fresh water as an endlessly renewable resource because, in many cases, people are pumping out water from underground sources at such a rate that it will not be restored within several lifetimes. "These are self-inflicted wounds," said Charles Vörösmarty, a professor at the Cooperative Remote Sensing Science and Technology Centre. "We have discovered tipping points in the system. The threats are numerous. Smart Water: Tech guarding our most precious resource. 29 July 2013Last updated at 19:59 ET By Matthew Wall Business reporter, BBC News Constant craving: Global water demand is projected to increase by 55% between 2000 and 2050 - without new technology, drought-ravaged fields of crops like this one in Colorado will become more common Ever since Archimedes invented his screw for drawing water uphill and the Romans built their famous aqueducts, mankind has tried to manipulate the earth's most precious resource through the use of technology. 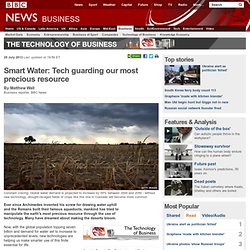 Many have dreamed about making the deserts bloom. Now, with the global population topping seven billion and demand for water set to increase to unprecedented levels, new technologies are helping us make smarter use of this finite essential for life. According to the OECD Environmental Outlook to 2050, global water demand is projected to increase by 55% between 2000 and 2050, by which time more than 40% of the global population may be under severe water stress.

" -- GWSP's Anik Bhaduri More than 65 percent of the world’s rivers are in trouble, according to one study published in Nature in 2010. 80 Percent of Global Water Supplies at Risk. This article is part of a special news series on the global water crisis. River biodiversity and our water security are in serious trouble, according to a comprehensive survey of waterways released yesterday. At risk are the water supplies of nearly 80 percent of humanity, and a variety of habitats along rivers that carry two-thirds of the world's water flow. 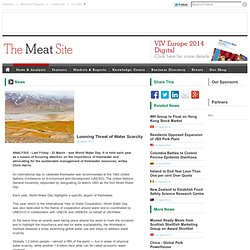 30 Facts About The Coming Water Crisis That Will Change The Lives Of Every Person On The Planet. The world is rapidly running out of clean water. 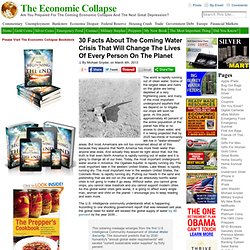 Some of the largest lakes and rivers on the globe are being depleted at a very frightening pace, and many of the most important underground aquifers that we depend on to irrigate our crops will soon be gone. At this point, approximately 40 percent of the entire population of the planet has little or no access to clean water, and it is being projected that by 2025 two-thirds of humanity will live in "water-stressed" areas. The Looming Threat of Water Scarcity. Eight radical solutions for the water shortage. 4 April 2012Last updated at 07:50 ET By Vanessa Barford & Lauren Everitt BBC News Magazine With hosepipe bans imminent, there is growing concern over drought in parts of the UK. But with population rising, how can a water crisis be averted?

After two unusually dry winters - which have left reservoirs, aquifers and rivers below normal levels - seven water companies across southern and eastern England are about to impose water restrictions. If the dry weather continues during spring, the Environment Agency (EA) has warned the drought could spread. The dire warnings bring back memories of 1976 - a year synonymous with sun, widespread water rationing and standpipes in the streets. Continue reading the main story Sound familiar? The so-called Great Drought of 1976 saw reservoirs dried up and turned into giant cracked mosaics of mud.

In Dorset, there were 45 days without any rain and for an unbroken stretch of 14 days, southern England clocked up temperatures in excess of 32C. Shortages: Water supplies in crisis. 19 June 2012Last updated at 03:45 ET By Roger Harrabin Environment analyst Most countries will have to make do with the water they've got, but there are stark disparities Over the past 40 years the world's population has doubled. The Coming Global Water Crisis - Stewart M. Patrick. What happens when demand for this essential resource starts exceeding supply in many parts of the world? Geovani Santos collects water from a weir which has nearly dried up as a consequence of the drought in Maracas at Bahia state of Brazil. / Reuters The recent UN alert that drought in the Sahel threatens 15 million lives is a harbinger of things to come.

World confronts serious water crisis, former heads of government and experts warn in new report. Water - Summary of the Report. Running Dry: Looming Water Shortages in The United States (2012) Running Dry: Looming Water Shortages in The United States (2012) Executive Summary. India most vulnerable to water shortages, report finds. India, the second-biggest producer of rice, wheat and sugar, is the most vulnerable among the world’s leading industrial and emerging economies to future water stress, according to HSBC. India exhibits the most worrying trends among the Group of 20 nations with the resource “hovering dangerously near extreme scarcity levels” by 2030, HSBC said in a report today that forecast the group’s water consumption against supply. The worst U.S. drought in a half-century drove corn and soybeans to records in August. Water shortages to hit food supply. UK faces higher risk of flooding and droughts as water crisis looms > Trends > Research.

By ClickGreen staff. Published Tue 06 Nov 2012 13:20 UK faces a mixed future of floods and droughts. Water Sustainability Tool. Global Trends 2025: Water shortages threaten food security, energy supply and geopolitical stability. The word on the world is out and, water-wise, it is far from encouraging. The National Intelligence Council’s (NIC) Global Trends 2025 report predicts that by the year 2025, 600 million people across 21 countries will experience cropland or freshwater scarcity. How China Could Avert a Water Crisis Without Uprooting 330,000 People. California's Innovative Water Recycling Runs Afoul Of California's Aggressive Climate Laws. Here’s a conundrum. Your state has a severe water shortage. So it invests in wastewater recycling, hoping to reduce the need to import water (the transport of which is its single most energy-intensive activity).

It then passes a pioneering climate change law. But five years later, it turns out the recycling is contributing to global warming by producing lots of greenhouse gases. What do you do? Nanotechnology key to new desalination system. Carbon Trust launches scheme to tackle water waste.