Saskatchewan Eco Network. Consequences of Biodiversity Loss The loss of biodiversity has often been seen as an aesthetic or bioethical issue. 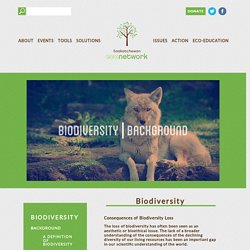 The lack of a broader understanding of the consequences of the declining diversity of our living resources has been an important gap in our scientific understanding of the world. Results emerging from the most extensive research ever on the ecological impacts of biodiversity have begun to fill this gap. A large-scale study called the BIODEPTH project has shown that reduced plant diversity impairs important aspects of ecosystem functioning. Causes of the loss of biodiversity. What Is Biodiversity? The term biodiversity refers to the variety of life on Earth at all its levels, from genes to ecosystems, and the ecological and evolutionary processes that sustain it. 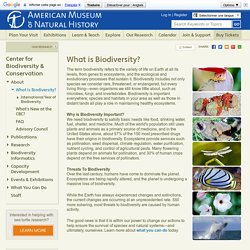 Biodiversity includes not only species we consider rare, threatened, or endangered, but every living thing—even organisms we still know little about, such as microbes, fungi, and invertebrates. Biodiversity is important everywhere; species and habitats in your area as well as those in distant lands all play a role in maintaining healthy ecosystems. Endangered species legislation. Our planet is undergoing a biodiversity crisis. 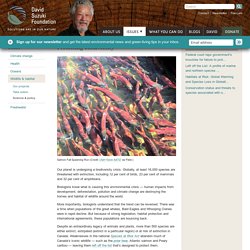 Globally, at least 16,000 species are threatened with extinction, including 12 per cent of birds, 23 per cent of mammals and 32 per cent of amphibians. Biologists know what is causing this environmental crisis — human impacts from development, deforestation, pollution and climate change are destroying the homes and habitat of wildlife around the world.

More importantly, biologists understand that the trend can be reversed. There was a time when populations of the great whales, Bald Eagles and Whooping Cranes were in rapid decline. But because of strong legislation, habitat protection and international agreements, these populations are bouncing back. Despite an extraordinary legacy of animals and plants, more than 500 species are either extinct, extirpated (extinct in a particular region) or at risk of extinction in Canada. Each province has its own obligations to protect wildlife. These "ecosystem services" include: Threats to Biodiversity in BC. Taking Nature’s Pulse concluded that of the six major stresses that threaten biodiversity in BC, the three most significant ones are ecosystem conversion, ecosystem degradation and alien species. 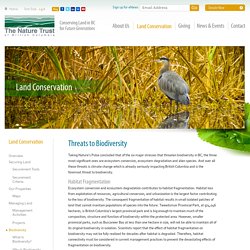 And over all these threats is climate change which is already seriously impacting British Columbia and is the foremost threat to biodiversity. Habitat Fragmentation Ecosystem conversion and ecosystem degradation contributes to habitat fragmentation. Biodiversity. Scientific Facts on Biodiversity & Human Well-being. Home » Biodiversity (MA) » Level 1 Context - Biodiversity contributes to many aspects of human well-being, for instance by providing raw materials and contributing to health. 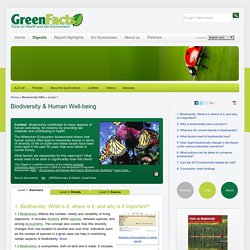 The Millennium Ecosystem Assessment shows that human actions often lead to irreversible losses in terms of diversity of life on Earth and these losses have been more rapid in the past 50 years than ever before in human history. What factors are responsible for this rapid loss? What would need to be done to significantly slow this trend? 1. 1.1 Biodiversity reflects the number, variety and variability of living organisms. 1.2 Biodiversity is everywhere, both on land and in water. 1.3 Ecosystem services are the benefits people obtain from ecosystems. 2. Biodiversity provides many key benefits to humans that go beyond the mere provision of raw materials. 2.2 Society tends to have various competing goals, many of which depend on biodiversity. 3. Loss of Biodiversity and Extinctions.

Author and Page information Massive Extinctions From Human Activity Despite knowing about biodiversity’s importance for a long time, human activity has been causing massive extinctions. 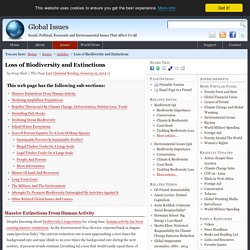 As the Environment New Service, reported back in August 1999 (previous link): “the current extinction rate is now approaching 1,000 times the background rate and may climb to 10,000 times the background rate during the next century, if present trends continue [resulting in] a loss that would easily equal those of past extinctions.” (Emphasis added) How does Biodiversity loss affect me and everyone else? "I understand there may be a biodiversity crisis, but how does that affect me?” 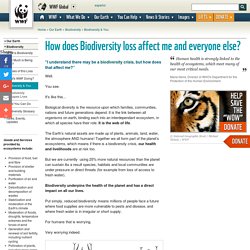 Well. You see. It's like this... Study the effect of pollution on an ecosystem. An ecosystem is a self-contained, dynamic system made of a population of species in its physical environment. 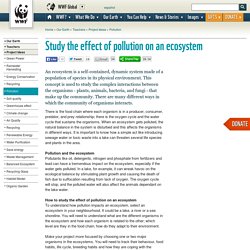 This concept is used to study the complex interactions between the organisms - plants, animals, bacteria, and fungi - that make up the community. There are many different ways in which the community of organisms interacts. There is the food chain where each organism is in a producer, consumer, predator, and prey relationship; there is the oxygen cycle and the water cycle that sustains the organisms. When an ecosystem gets polluted, the natural balance in the system is disturbed and this affects the organisms in different ways. It is important to know how a simple act like introducing sewage water or toxic waste into a lake can threaten several life species and plants in the area. Global Warming Kills Whitebark Pines, Threatening Mountain Ecosystems. Environmental Issues > Wildlife Main Page > All Wildlife Documents Millions of dying whitebark pine trees could be disastrous for the delicate ecosystem that supports grizzlies, birds and Western water supplies. 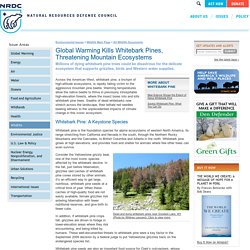 Across the American West, whitebark pine, a linchpin of high-altitude ecosystems, is rapidly falling victim to the aggressive mountain pine beetle. Warming temperatures allow the native beetle to thrive in previously inhospitable high-elevation forests, where the insect bores into and kills whitebark pine trees. Swaths of dead whitebarks now stretch across the landscape, their telltale red needles bearing witness to the unprecedented impacts of climate change in this iconic ecosystem.