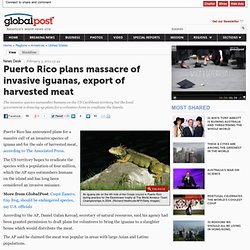 Puerto Rico has announced plans for a massive cull of an invasive species of iguana and for the sale of harvested meat, according to The Associated Press. The US territory hopes to eradicate the species with a population of four million, which the AP says outnumbers humans on the island and has long been considered an invasive nuisance. More from GlobalPost: Coquí llanero, tiny frog, should be endangered species, say U.S. officials According to the AP, Daniel Galan Kercad, secretary of natural resources, said his agency had been granted permission to draft plans for volunteers to bring the iguanas to a slaughter house which would distribute the meat.

The AP said he claimed the meat was popular in areas with large Asian and Latino populations. More from GlobalPost: Decision time for PR Puerto Rico may not be the only place trying to eradicate pesky herbivorous lizards. Shade_Coffee. Spacama. Ja_iitf_2008_abelleira001_act_v22_1thru3. Growth of nonnative iguana population give Puerto Ricans a headache. Vazquez for News Iguana sunbathes near Boca de Cangrejos, Puerto Rico. 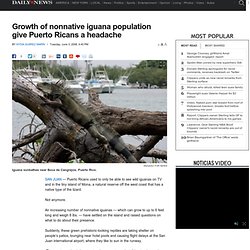 SAN JUAN — Puerto Ricans used to only be able to see wild iguanas on TV and in the tiny island of Mona, a natural reserve off the west coast that has a native type of the lizard. Not anymore. An increasing number of nonnative iguanas — which can grow to up to 6 feet long and weigh 8 lbs. — have settled on the island and raised questions on what to do about their presence.

Suddenly, these green prehistoric-looking reptiles are taking shelter on people’s patios, lounging near hotel pools and causing flight delays at the San Juan international airport, where they like to sun in the runway. “The great question is how to stop these creatures that did not arrive on the island through natural means but were brought here,” said Alexis Molinares, a wildlife ecologist and environment consultant. Iguanas, says Molinares, attack Puerto Rico’s native fauna, including small crabs and bird eggs. Forest Ecology and Management - Emerging forests on abandoned land: Puerto Rico’s new forests. Ja_iitf_2004_lugo004. Alien species land regeneration. Our systems have detected unusual traffic from your computer network. 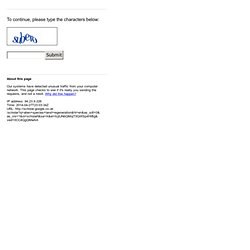 This page checks to see if it's really you sending the requests, and not a robot. Why did this happen? This page appears when Google automatically detects requests coming from your computer network which appear to be in violation of the Terms of Service. The block will expire shortly after those requests stop. In the meantime, solving the above CAPTCHA will let you continue to use our services. This traffic may have been sent by malicious software, a browser plug-in, or a script that sends automated requests. Sometimes you may be asked to solve the CAPTCHA if you are using advanced terms that robots are known to use, or sending requests very quickly. URL: MANAGEMENT GUIDELINES FOR INVASIVE ALIEN SPECIES IN CANADA'S NATIONAL PARKS. 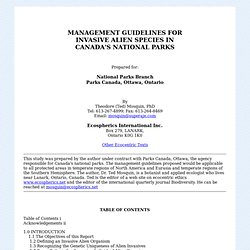 Box 279, LANARK, Ontario K0G 1K0 Other Ecocentric Texts This study was prepared by the author under contract with Parks Canada, Ottawa, the agency responsible for Canada's national parks. Table of Contents i Acknowledgements ii 1.0 INTRODUCTION 1.1 The Objectives of this Report 1.2 Defining an Invasive Alien Organism 1.3 Recognizing the Genetic Uniqueness of Alien Invasives 1.4 Some Criteria for Assessing Individual Alien Organisms 5.0 CLASSIFICATION OF PROBLEMATIC ALIEN SPECIES IN CANADA'S NATIONAL PARKS 5.1 Rationale for Prioritization of Canadian Alien Species 5.2 The Strange Case of Classifying "Alien Natives" Alien Species Reconsidered: Finding a Value in Non-Natives by Carl Zimmer. 24 Feb 2011: Report by carl zimmer The tale of the honeybee is a sadly familiar one: a once-thriving species is on the ropes. 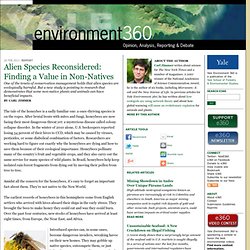 After brutal bouts with mites and fungi, honeybees are now facing their most dangerous threat yet: a mysterious disease called colony collapse disorder. In the winter of 2010 alone, U.S. beekeepers reported losing 34 percent of their hives to CCD, which may be caused by viruses, pesticides, or some diabolical combination of factors. Researchers are working hard to figure out exactly why the honeybees are dying and how to save them because of their ecological importance.

Amidst all the concern for the honeybees, it’s easy to forget an important fact about them. The earliest records of honeybees in this hemisphere come from English settlers who arrived with hives aboard their ships in the early 1600s. Wikimedia Honeybees were introduced into the Western Hemisphere in the 1600s and have become an ecologically important species. introduced species can do some good.