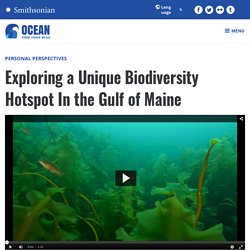 This underwater mountain range is home to a great diversity of life, with colors typically associated with a coral reef rather than a cold, northern environment. Its steep peaks reach almost to the ocean’s surface—a fact that historically made Cashes Ledge a dangerous place for fishermen, who could easily snag and rip or lose their nets on the jagged underwater mountaintops. As a result, the thriving ecosystems on the Ledge have been relatively undisturbed by people for centuries. To promote the rebuilding of New England’s depleted groundfish populations including Atlantic cod, fishery managers closed Cashes Ledge and the area around it in 2002 to commercial bottom trawling and dredging – affording this special place some protection.

As marine ecologist at Brown University, I have been studying Cashes Ledge for more than thirty years. The underwater landscape there isn’t all rocky ridge. Images from Brian Skerry. U.S.-Mexico Border Wall: Are Animals at Risk? Officials may boost depleted Isle Royale wolf population. Managers are leaning toward relocating as many as 30 gray wolves to Isle Royale National Park from the mainland to restore an iconic predator species on the verge of disappearing from the Lake Superior island chain, according to a federal report released Friday. 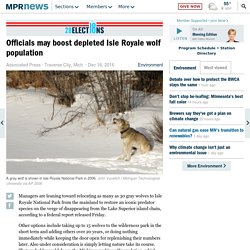 Other options include taking up to 15 wolves to the wilderness park in the short term and adding others over 20 years, or doing nothing immediately while keeping the door open for replenishing their numbers later. Also under consideration is simply letting nature take its course. That probably would doom the Michigan park's wolf population, which has plummeted in recent years and now consists of just two inbred survivors. The population totaled 24 as recently as 2009. The choices are outlined in a draft environmental impact report crafted by National Park Service scientists, other staffers and outside consultants. Officials said the wolves' popularity, while important, won't be the deciding factor. Philippines to temporarily close popular tourist island Boracay. Image copyright Reuters The Philippine island of Boracay will be closed to tourists for six months following concerns of damage to its once pristine shores. 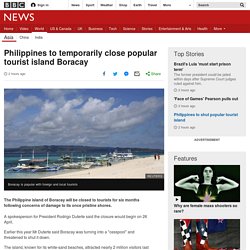 A spokesperson for President Rodrigo Duterte said the closure would begin on 26 April. Earlier this year Mr Duterte said Boracay was turning into a "cesspool" and threatened to shut it down. The island, known for its white-sand beaches, attracted nearly 2 million visitors last year. Most UK bat species 'recovering or stable' Image copyright John Altingham The UK's bats are holding their own, according to the most recent national survey. 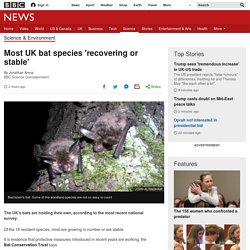 Of the 18 resident species, most are growing in number or are stable. It is evidence that protective measures introduced in recent years are working, the Bat Conservation Trust says. However, the group cautions that the status of all populations needs to be viewed in the context of major declines that occurred during the 20th Century. "There has been so much conservation action in recent years, along with legislation, that we would have hoped to see some sort of positive response," said Phil Briggs, the trust's monitoring manager.

Macron awards US scientists grants to move to France in defiance of Trump. Eighteen climate scientists from the US and elsewhere have hit the jackpot as France’s president, Emmanuel Macron, awarded them millions of euros in grants to relocate to France for the rest of Donald Trump’s presidential term. 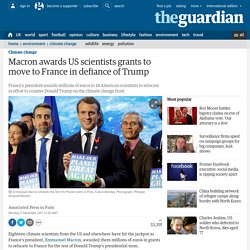 The “Make Our Planet Great Again” grants – a nod to Trump’s “Make America Great Again” campaign slogan – are part of Macron’s efforts to counter Trump on the climate change front. Macron announced a contest for the projects in June, hours after Trump declared he would withdraw the US from the Paris climate accord. More than 5,000 people from about 100 countries expressed interest in the grants. Northern Ireland bogs - Five year conservation plan. 'Worrying alarm call' for world's birds on brink of extinction. Image copyright Ed Marshall Overfishing and changing sea temperatures are pushing seabirds to the brink of extinction, according to new data on the world's birds. 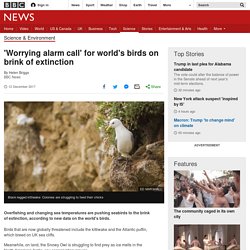 Birds that are now globally threatened include the kittiwake and the Atlantic puffin, which breed on UK sea cliffs. Meanwhile, on land, the Snowy Owl is struggling to find prey as ice melts in the North American Arctic, say conservation groups. These Are The Newest Additions To The IUCN Red List Of Threatened Species. Thousands of species are at serious risk of being driven to extinction, according to the latest annual Red List of Threatened Species by the International Union for Conservation of Nature (IUCN). 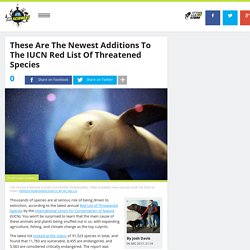 You won’t be surprised to learn that the main cause of these animals and plants being snuffed out is us, with expanding agriculture, fishing, and climate change as the top culprits. The latest list looked at the status of 91,523 species in total, and found that 11,783 are vulnerable, 8,455 are endangered, and 5,583 are considered critically endangered. The report was presented by Craig Hilton-Taylor, who leads the team that conducts the IUCN assessment in Tokyo. They offset the overall gloom with a rare positive example of a species being saved from extinction, as two species of kiwi have now been downgraded. Australia's frog count: App calls on citizen scientists. Image copyright Australian Museum Croaks and chirps. 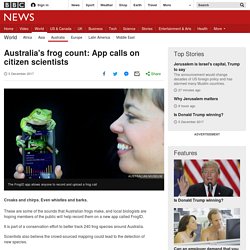 Even whistles and barks. These are some of the sounds that Australian frogs make, and local biologists are hoping members of the public will help record them on a new app called FrogID. It is part of a conservation effort to better track 240 frog species around Australia. Republicans Want To Force The Critically Endangered Red Wolf Into Extinction. The red wolf, Canis rufus, currently exists only as a small population in one part of North Carolina. 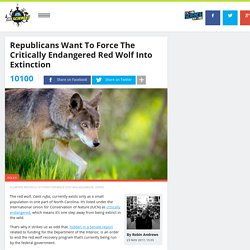 How Chilean fishermen adapted to protect marine life. Chile created one of the world's largest marine protection areas earlier this month off the coast of Easter Island after the indigenous Rapa Nui population voted in favour of the scheme. 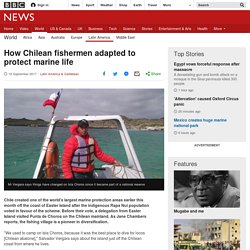 Before their vote, a delegation from Easter Island visited Punta de Choros on the Chilean mainland. As Jane Chambers reports, the fishing village is a pioneer in diversification. "We used to camp on Isla Choros, because it was the best place to dive for locos [Chilean abalone]," Salvador Vergara says about the island just off the Chilean coast from where he lives.

The locos he talks about are large edible sea snails, a highly sought after delicacy in Chile which also fetches high prices at seafood markets in Japan. "We even had a football pitch, but now only scientists and park rangers can go there," he recalls. Salvador Vergara is a third-generation Chilean fisherman. Mexico creates huge national park to protect marine life. Image copyright Getty Images The Mexican government has created a large marine reserve around a group of islands home to hundreds of species including rays, whales and sea turtles. The Revillagigedo Archipelago is a group of volcanic islands off the country's south-west coast. With a protection zone of 57,000 square miles (150,000km), it has become the largest ocean reserve in North America. The move will mean all fishing activity will be banned, and the area will be patrolled by the navy. Mexico creates huge national park to protect marine life. Theconversation. Being a cheetah researcher in Kenya’s Maasai Mara, I’m often asked how many cheetahs there are in the region.

It’s an important question, especially for conservation as it is crucial to accurately estimate population sizes and to monitor trends into the future. In the early 1900s it was believed that around 100,000 cheetahs roamed the earth. The most recent estimate by the International Union for Conservation of Nature puts the figure at 6,600 – mainly in eastern and southern Africa – amid fears that the fastest land mammal is racing to extinction. Cheetahs are now extinct in 20 countries and occupy only 17% of their historic range. The remaining populations that are of global importance are found in southern Africa – Botswana, Namibia and South Africa - and in East Africa – Kenya and Tanzania. We set out to address this gap by designing and conducting an intensive field survey based on search-encounters of cheetahs in the Maasai Mara National Reserve and its surrounding conservancies.

Counting Africa's elephants from the sky - BBC Indonesia. President Obama has set out the vision he hopes will define his legacy in his final State of the Union address. He vowed to continue targeting terrorist networks, accelerate the switch from fossil fuels and also launch a new drive to cure cancer. The Global Solution to Extinction. The one major reserve in the United States that has been subjected to a complete census is the Great Smoky Mountains National Park. Fifty thousand hours of field work there by specialists and assistants have yielded records of 18,000 species of animals and microorganisms alone, with 40,000 to 60,000 considered likely on the roster when all transients, as well as rare and undescribed species, have been registered. 50 percent of habitats saved. 25 percent of habitats saved. 15 percent of habitats saved (roughly the total preserved land habitat in the world today).

Bat-sound library tracks biodiversity. Image copyright UCL/ZSL Scientists have compiled the biggest known library of bat sounds in an effort to identify and conserve rare species. Mexico is home to many of the world's bats, but it also has one of the highest rates of extinction. International researchers recorded more than 4,500 calls from about half of Mexico's 130 bat species. The audio library allows bat calls to be identified automatically, helping to monitor any changes in biodiversity. Co-researcher, Prof Kate Jones, of UCL and Zoological Society London, said the ability to map bats was crucial for implementing effective conservation measures. "We've shown it is possible to reliably and rapidly identify bats in mega-diverse areas, such as Mexico, and we hope this encourages uptake of this method to monitor biodiversity changes in other biodiversity hotspot areas such as South America," she said.

Bat detectives. For the first time in 100 years, tiger numbers are growing. Youtube. Extinctions. More than 90 percent of all organisms that have ever lived on Earth are extinct. As new species evolve to fit ever changing ecological niches, older species fade away. National Geographic The Story of Earth HD. Species rule change considered. A government consultation on whether to change the rules governing how contractors deal with protected species when developing sites ends this week. Go wild to protect food security, says study.

Image copyright GCDT/L.Salazar More needs to be done to ensure wild relatives of our key food crops are conserved for future generations, a study has said. The Animals of Chernobyl. Two mutant lobsters caught off Cornish coast. Two mutant lobsters - one with three cutting claws and the second with two sets of crushing claws - have been caught by a Cornish fisherman. Early man 'couldn't stomach milk' A drink of milk was off the menu for Europeans until only a few thousand years ago, say researchers from London. Evolution and Darwin. Europe's rarest seabird 'faces extinction' Image copyright Joe Pender Europe's rarest seabird will be extinct within 60 years, according to a new analysis. Urgent action is needed to stop the Balearic sheerwater being drowned in fishing lines and nets, say scientists.