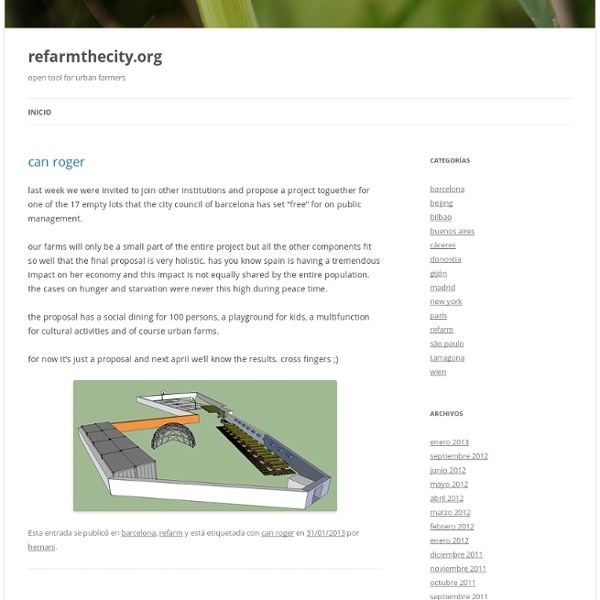 I will share here a low cost solution for the recycling of organic waste, appropriate for apartments and urban housing that do not have a piece of land or an outdoor area. This construction is inspired by the Cadico earthworms nice project. The photos are from the composter I made here at home : ) It’s called a Vermi composter because we use worms in the process, uhuuuuu big thanks to the worms, they deserve! To make this kind of composter, it is important to use stackable supports to separate the different stages of composting. In this case, I used 3 buckets of margarine 15L reused. The first step is to cut the center of the lids that stands between the buckets. Then we will make holes into the bottom of the 2 buckets that will stay on top and receive the organic waste. Then, we use thinner drills, size 1, or 1.5 mm for making holes in the top of these 2 buckets to allow the entry of air, very important component of a good composting. Place a first layer of compound or forest land. . .

Laboratoire d’Urbanisme Agricole Root Cellars There are various types of Root Cellars including ones connected and those separate from your home. Some made from earth and others made from old freezers, culverts, cement or simple garbage cans. Whatever your choice they are excellent for year around food storage. Remember safety though and make sure your root cellar is well ventilated if its large enough to walk into. A Plan for All Seasons Why winter was NOT just a cold gruel world for 1830's New Englanders By Mark Ashton From Old Sturbridge Visitor, Winter 1997. A Root Cellar for Your Homestead-The low-tech root cellar, will keep your harvest fresh for two months or longer, depending on what you store, without ozone-depleting refrigeration, or electricity. BBC-Short article on Root Cellars-Dig a hole and voila, a root cellar. Building an outside root cellar-Werner Gysi wrote this nice little article on building and designing a root cellar. Country Life-Mrs. Ehow-How to make a root cellar from your deep freezer or old fridge.

Worgamic 'The Urban Food Revolution' Goes High Rise Solviva Salad? Five-storey vertical farms? A taste of Peter Ladner's new book on growing food in cities. Asked to create a concept for vertical farming in New York City, the architecture firm WorkAC designed this. The Urban Food Revolution: Changing the Way We Feed Cities Peter Ladner New Society Publishers (2011) [Editor's note: The following chapter, "In Praise of Technology," is excerpted with permission from Peter Ladner's The Urban Food Revolution: Changing the Way We Feed Cities. A week after the wettest September on record, farmer Bill Zylmans called into a local radio show from his tractor on his farm in Richmond, B.C. "I'm sitting here on the tractor, looking out over the fields. "It's not just potatoes. "Farmers have been trying. "On this farm alone, our loss is hundreds of thousands of dollars. "Young farmers who started this year, will they be around next year? Being at the mercy of the weather is the fate of farmers throughout history. As the writer P.

GREEN RUSH Shaping Traditional Oral knowledge: about project "Observing the food and therefore changing the notion of food preservation, we could find the answer to current situations such as the overuse of energy and food wastage. My design is a tool to implement that knowledge in a tangible way and slowly it changes the bigger picture of society. I believe that once people are given a tool that triggers their minds and requires a mental effort to use it, new traditions and new rituals can be introduced into our culture." This project is about traditional oral knowledge which has been accumulated from experience and transmitted by mouth to mouth. Through the research into the current situation of food preservation, I’ve learned that we hand over the responsibility of taking care of food to the technology, the refrigerator. Therefore my design looks at re-introducing and re-evaluating traditional oral knowledge of food, which is closer to nature. jihyun ryou 2009, shaping traditional oral knowledge-save food from the fridge

7 Mega-Cartels That Kill the Free Market and Our Sovereignty Activist Post Think we have a free market? Think again. Think it was free market capitalism that collapsed the financial system? Think again. What America has, and what we've had for a long time, is Cartelism. It's only natural that a hierarchical system would result in exponential attraction of power to the few at the top. Each major industry in America, and globally, is predominantly run by a handful of companies who are aided by the corporate-government revolving door. Here are descriptions of 7 mega-cartels that killed the free market and effectively run America's oligarchy beginning at the top of the pyramid and cascading down: Banking: The Federal Reserve and their consortium of the "Too-Big-to-Fail" mega-banks make up the Wall Street cartel at the apex of all other pyramids. All of these institutions were originally founded by European bankers yet their connections now expand to nearly every central bank and the IMF and World Bank. Military: The business of war is booming.

Vincent Callebaut Architecte DRAGONFLY The world of fast-food and frozen food is over! The urban keen interest of the beginning of our Century turns toward the garden flat bringing back the countryside in our overcrowded cities fighting from now on for a community urban agriculture able to contribute to the durability of the city and to rethink the food production. On the roofs, terraces, balconies, in the hollow of the non-built public spaces, in the interior yards and the suspended greenhouses, the eco-warrior aspires to escape from its competitive and consumeristic universe imposed by the laws of the market. He desires to cultivate its immediate landscape so as to better take root in the ground by creating his own ecologic and alimentary biodiversity. The consumer becomes from then on producer and the garden inhabitant ! According to the PNUD (Programme of the United Nations for the Development), the worldwide urban population will go from 3.1 billion of inhabitants in 2009 up to 5.5 billion of inhabitants within 2025.

Neighborhood Cows and Pigs: Real Food Sovereignty “You don’t actually drink the milk do you?” When acquaintances learn we have dairy cows on our small farm, many ask us that very question with incredulous expressions. We’ve also been asked, too many times to count, if we really eat the eggs from our hens. “Don’t they, like, come out of a chicken’s butt?” a colleague asked my husband. Separation from the source of our sustenance may be unique to our era.. The oldest folks I know tell me about raising goats and chickens on city lots, growing grapes behind apartment buildings to make wine, gardening anywhere they found land. They’re talking about food sovereignty. It was only a few generations ago that advertisers managed to convince consumers that growing, preserving, and preparing meals should be left to experts. But we’re eager to find solutions. We’re reconnecting through our food in bold (and tasty) ways. How about pigs? How about goats? How about cows? Real solutions are nearby.