Why Are Upworthy Headlines Suddenly Everywhere? - Robinson Meyer. I haven’t seen anything like it in a long time. 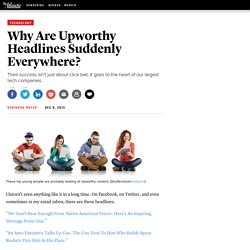 On Facebook, on Twitter, and even sometimes in my email inbox, there are these headlines. “We Don’t Hear Enough From Native American Voices. Here’s An Inspiring Message From One.” “An Auto Executive Talks Up Gas. Dunhuang: A Secret Library, Digitally Excavated. Just over a thousand years ago, someone sealed up a chamber in a cave outside the oasis town of Dunhuang, on the edge of the Gobi Desert in western China. 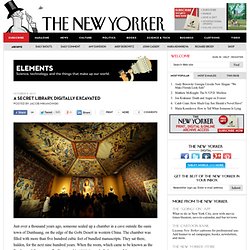 The chamber was filled with more than five hundred cubic feet of bundled manuscripts. They sat there, hidden, for the next nine hundred years. When the room, which came to be known as the Dunhuang Library, was finally opened in 1900, it was hailed as one of the great archaeological discoveries of the twentieth century, on par with Tutankhamun’s tomb and the Dead Sea Scrolls. Amazon e-book offer riles independent bookshop owners. 8 November 2013Last updated at 08:09 ET By Dave Lee Technology reporter, BBC News One bookshop owner said the scheme would be like "inviting hungry foxes into the henhouse" Bookshop owners have hit back at an initiative by Amazon to sell its Kindle e-book reader in independent shops. 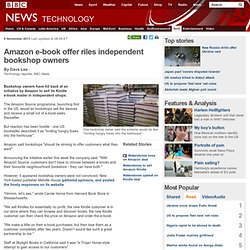 The Amazon Source programme, launching first in the US, would let bookshops sell the devices and receive a small cut of e-book sales thereafter. Trends Publishers Will Pass Up In 2013. ‘Tis the season for prognostications across the digital landscape. 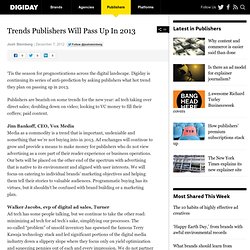 Digiday is continuing its series of anti-prediction by asking publishers what hot trend they plan on passing up in 2013. Publishers are bearish on some trends for the new year: ad tech taking over direct sales; doubling down on video; looking to VC money to fill their coffers; paid content. Jim Bankoff, CEO, Vox Media Media as a commodity is a trend that is important, undeniable and something that we’re not buying into in 2013. Ad exchanges will continue to grow and provide a means to make money for publishers who do not view advertising as a core part of their reader experience or business operations. Our bets will be placed on the other end of the spectrum with advertising that is native to its environment and aligned with user interests.

5 Academic Publishing Trends to Watch in 2013. Five Trends Shaping Digital Publishing in 2013. Now that 2013 is underway it is good to get a lay of the land in mobile and tablet publishing. Here are five major trends that you will want to keep an eye on as part of your strategy for the coming year. Print Commits Suicide. Seven publishing trends that will define 2013.

By Hamish McKenzie On January 2, 2013 When you look back at it, 2012 was a stupendous year for news and magazine publishing. 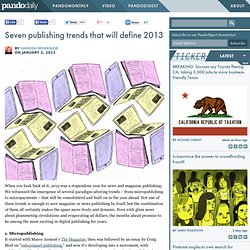 We witnessed the emergence of several paradigm-altering trends – from micropublishing to micropayments – that will be consolidated and built on in the year ahead. Not one of these trends is enough to save magazine or news publishing by itself, but the combination of them all certainly makes the space more lively and dynamic. Even with glum news about plummeting circulations and evaporating ad dollars, the months ahead promise to be among the most exciting in digital publishing for years. Content Curation Tools: Possibilities and Pitfalls. As organizations and individuals work to build their Twitter followers they eagerly watch for mentions and RTs (retweets). And then they spot something like this: "XYZ E-publication is out today!

Top stories by @thisperson @thatperson @YOU! " Your first inclination is to quickly RT the tweet to all of your followers and respond to the poster with a heart-felt "gee, thanks so much for including me! " But, wait a minute, is there any real value in this kind of exposure? When we work with organisations, helping them to explore what they might look like in 20-30 years, they are often surprised – shocked, sometimes – when they realise that their activities might be completely different from what they do now. 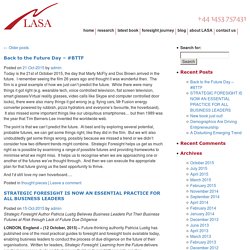 Change is happening all the time; usually the steps are manageably small, so we adapt and acclimatise ourselves to the new normal, literally on a day-to-day basis. Sometimes the steps appear really big: so remarkable, so unusual that you may hear comments like “it will never take off” – which cause you to smile some years later when that “remarkable” and “unusual” thing is now the norm. A perfect example is the smartphone or tablet. Ramaiah_articl_9 - fulltext.pdf.

E-publishing Trends. The world of books and publishing has been overwhelmed by the recent emergence of popular e-books in the consumer market place. 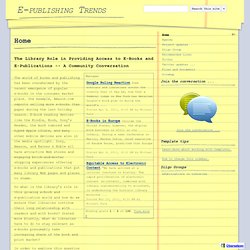 One example, Amazon.com reports selling more e-books than paper during the last holiday season. E-book reading devices like the Kindle, Nook, Sony’s Reader, the much rumored and hyped Apple iSlate, and many other mobile devices are also in the media spotlight. Seven publishing trends that will define 2013. FINAL-Davignon-INSIDE PAGES:US Bain Brief.qxd - BB_Publishing_in_the_digital_era.pdf. The future of the bookstore: A real cliffhanger. The Future Of Content: Content Is The Future. Editor’s note: Contributor Ashkan Karbasfrooshan is the founder and CEO of WatchMojo, he hosts a show on business and has published books on success. 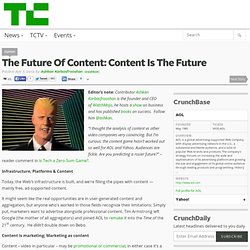 Follow him @ashkan. “I thought the analysis of content vs other video companies very convincing. But I’m curious: the content game hasn’t worked out so well for AOL and Yahoo. Audiences are fickle. Are you predicting a rosier future?” Big-six publishers refuse to sign new contracts with Amazon. At least two of the big-six publishers are refusing to sign new annual contracts with Amazon. 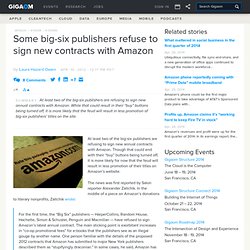 Though that could end with their “buy” buttons being turned off, it is more likely for now that the feud will result in less promotion of their titles on Amazon’s website. The news was first reported by Salon reporter Alexander Zaitchik. What Apple's Ebook Fiasco Means for Amazon and the Book Business. Now that the Department of Justice is officially probing the alleged price-fixing conspiracy on ebooks between Apple and many of the major publishing houses, some clear winners and losers have begun to emerge. 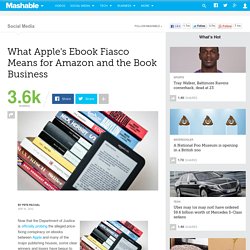 Winner Number One: Amazon, which said earlier this week it drop prices once again on ebooks, many of which it had been selling for $9.99 before the so-called "collusion. " Basically, Apple made an agreement that let publishers set the price, but also got the guarantee that its iBookstore could not be undersold (for its part, Apple has said it did nothing wrong). If Amazon dared keep it's $9.99 pricing, it would risk losing those titles altogether. Follow Up: The Tablet Really Is Killing The E-Reader. E Ink Holdings, the firm behind the allegedly easy-on-the-eye daylight readable electronic paper that once made your Kindle or Nook so great, has just reported its first loss in 10 successive quarters. The company made a net loss of NT$787 million (a little under $27 million) for the first three months of 2012, after it saw a 63% slump in revenues from the previous quarter to NT$3.84 billion.

The company says it's due to "off-season effects and inventory adjustments at clients. " Yes, we're inclined to believe that the shift from the always-lucrative holiday season quarter to the dim, wintery first three months of the year could quite definitely adjust how many e-reader devices the average consumer buys. Pubslush Is Like Kickstarter for Authors.

Name: Pubslush Big Idea: Pubslush is injecting Kickstarter-esque crowdfunding into the publishing process. Why It's Working: Traditional publishing has a lot of overhead costs and bureaucracy that make it hard for potentially popular books to get published; with it's pledging model, Pubslush guarantees an audience before putting ink to paper. Plus, one book is donated for each one that's purchased. Too often, good manuscripts end up in the slush pile — in fact, J.K. Publishing Is Broken, We're Drowning In Indie Books - And That's A Good Thing.