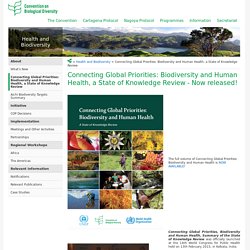 Download the Briefing Note, or view the WHO VIDEO STATEMENT prepared for the IUCN World Parks Congress held in Sydney, Australia in November 2014. Additional information on Stream 3: Improving Health and Well-Being Stream, Launches and Legacies is also available. Oceans Valued at $24 Trillion: Here’s the Breakdown. Arctic climate change impacts on ecosystem services and society. The biodiversity crisis: Worse than climate change. 19 January 2012 Biodiversity Biodiversity is declining rapidly throughout the world. 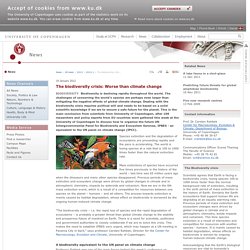 The challenges of conserving the world’s species are perhaps even larger than mitigating the negative effects of global climate change. Dealing with the biodiversity crisis requires political will and needs to be based on a solid scientific knowledge if we are to ensure a safe future for the planet. This is the main conclusion from scientists from University of Copenhagen, after 100 researchers and policy experts from EU countries were gathered this week at the University of Copenhagen to discuss how to organise the future UN Intergovernmental Panel for Biodiversity and Ecosystem Services, IPBES - an equivalent to the UN panel on climate change (IPCC). Professor: Politikerne værdsætter ikke vores biodiversitet. 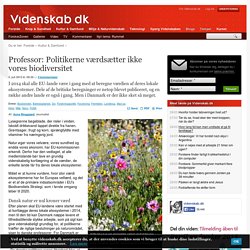 Let us start with the good news. 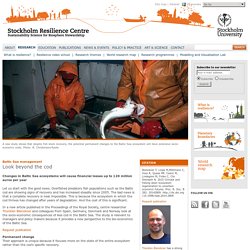 Overfished predatory fish populations such as the Baltic cod are showing signs of recovery and has increased steadily since 2005. The bad news is that a complete recovery is near impossible. Biodiversity conservation: moving towards valuation of ecosystem services. As a company that is reliant on forest products, Fibria is committed to developing its business in a sustainable way.

More than 35% of the land the company owns is dedicated to conservation purposes. The company is thus aware of the role it plays in the conservation of biodiversity hot spots, particularly in the biomes where its operations are concentrated, namely the Brazilian Atlantic Rainforest, the Cerrado and the Pampas. The issue In recent years, Fibria has established itself as a Brazilian company engaged in sustainable forest management, capable of creating value from renewable resources. With 19,000 employees, the company operates in 254 municipalities in seven states within Brazil. Biodiversity degradation is an increasingly widespread phenomenon throughout the world. Institute for European Environmental Policy - Valuing Biodiversity & Ecosystem Services. This new report highlighting the importance of nature to the economy was released as part of the TEEB paper series. 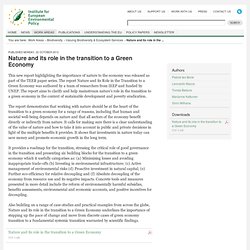 POLICYMIX - Home. Report of the second stakeholder workshop. The report from the Second BESAFE Stakeholders Workshop that took place on 13–14 May 2014 in Brussels is now ready and available through the project’s Online Library. 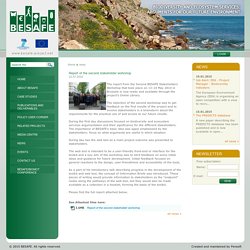 The objective of the second workshop was to get feedback on the first results of the project and to involve stakeholders in a brainstorm about the requirements for the practical use of and access to our future results. During the first day discussions focused on biodiversity and ecosystem services argumentation and their significance for the different stakeholders. The importance of BESAFE’s basic idea was again emphasized by the stakeholders: focus on what arguments are useful in which situation. During day two the web tool as a main project outcome was presented to stakeholders.

The web tool is intended to be a user-friendly front-end or interface for the toolkit and a key aim of the workshop was to elicit feedback on some initial ideas and guidance for future development. Please find the full report attached below. BIOMOT. Besafe-Biomot-Conference-June2015-home. International Conference on Motivations and arguments to act for biodiversity Alternative ways to inspire innovative policy making 10th–11th of June 2015, Brussels, Les Ateliers des Tanneurs Biodiversity in Europe continues to decline. 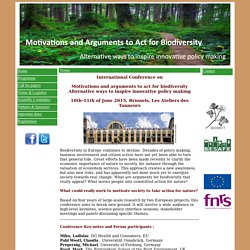 Decades of policy making, business involvement and citizen action have not yet been able to turn that general tide. Great efforts have been made recently to clarify the economic importance of nature to society, for instance through the valuation of ecosystem services. What could really work to motivate society to take action for nature? Based on four years of large-scale research by two European projects, this conference aims to break new ground. Conference Key-notes and Forum participants : Organised by the BESAFE research consortium, the BIOMOT research consortium, and the BIOGOV research unit at Université catholique de Louvain [Flyer] Funded by the FP7 programme of the European Union and the National Research Foundation, Belgium (F.R.S.