Extinction, Endangered Species, Biodiversity and Climate Change. An integrative environmental pollen diversity assessment and its importance for the Sustainable Development Goals - Hornick - Extinction, Endangered Species, Biodiversity and Climate Change. Plants evolved complexity in two bursts – with a 250-million-year hiatus - The Global Plant Council. A new method for quantifying plant evolution reveals that after the onset of early seed plants, complexity halted for 250 million years until the diversification of flowering plants about 100 million years ago. 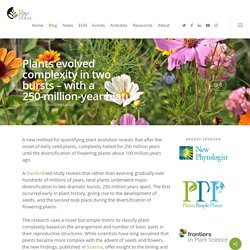 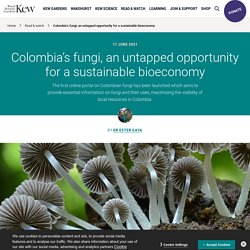 Want to investigate evolutionary response to global change? Project Baseline has already taken the first steps for you! Join us for a FREE virtual workshop series abt using this unique seedbank in your research program. Succession revealed: a saga of environmental stress, facilitation and competition. In this new author post Anthony Davy provides an insight into a 35-year longitudinal study of salt marsh development from intertidal flat to a mid-marsh platform at Odiel Marshes in south-western Iberia. 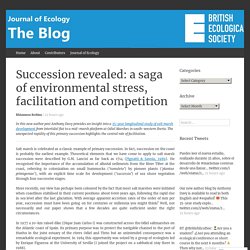 The unexpected rapidity of this primary succession highlights the central role of facilitation. Salt marsh is celebrated as a classic example of primary succession. In fact, succession on the coast is probably the earliest example. Theoretical elements that we have come to apply to salt marsh succession were described by G.M. Lancisi as far back as 1714 (Pignatti & Savoia, 1989). More recently, our view has perhaps been coloured by the fact that most salt marshes were initiated when coastlines stabilised in their current positions about 6000 years ago, following the rapid rise in sea level after the last glaciation. In pictures: Plant species identified in lockdown. Fields of View - The Learned Pig. Summer has come to the Chicago region. 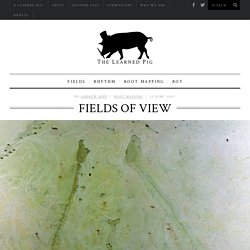 We haven’t hit the solstice, but the unfurling oak canopy, the yellow jewelweed cotyledons, the carpets of bedraggled false mermaid, the aural transition to the songs of indigo buntings, pewees, and red-eyed vireos on my morning walks all signal the end of spring. As the forest’s inhabitants elbow their way into June each year, my attention turns to their points of conflict, collaboration, and shared history. ‘Orchids are somewhat more threatened than plants in general.’ Kew scientist @michaelffay60 speaks to Phoebe Weston &amp; Patrick Greenfield on the 'inside the world of wildlife trafficking' podcast. □Listen now □ Where Did That Cockatoo Come From? “Madonna della Vittoria,” by the Renaissance painter Andrea Mantegna, must have looked imposing when it was first installed as an altarpiece in Santa Maria della Vittoria, a small chapel in the northern-Italian city of Mantua. 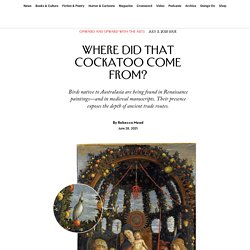 The painting, which was commissioned by the city’s ruler, Francesco II Gonzaga, was completed in 1496, and measures more than nine feet in height. A worshipper’s eye likely lingered on its lower half—where the Virgin, seated on a marble pedestal, bestows a blessing on the kneeling, armored figure of Francesco—instead of straining to discern the intricacies of its upper half, which depicts a pergola bedecked with hanging ornaments and fruited vines.

In the late eighteenth century, Napoleon’s forces looted the painting and transported it to the Louvre, where it now occupies a commanding spot in the Denon wing. The sulfur-crested cockatoo is a sizable bird, about twenty inches tall when full grown. Soon enough, parrots began showing up in European art. Rare orchids found in City of London bank's rooftop garden. The growing and vital role of botanical gardens in climate change research. - Abstract. Botanical gardens make unique contributions to climate change research, conservation, and public engagement. 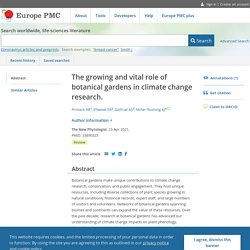 They host unique resources, including diverse collections of plant species growing in natural conditions, historical records, expert staff, and large numbers of visitors and volunteers. Networks of botanical gardens spanning biomes and continents can expand the value of these resources. Over the past decade, research at botanical gardens has advanced our understanding of climate change impacts on plant phenology, physiology, anatomy, and conservation. For example, researchers have utilized botanical garden networks to assess anatomical, and functional traits associated with phenological responses to climate change.

Plants That Are Near Extinction. Way back in the middle of the 20th century, a deadly blight swept through the trees of the Ozarks. 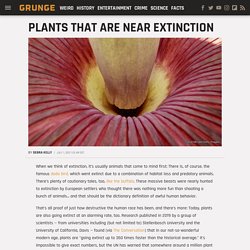 Among the casualties was the Castanea ozarkensis, or Ozark chinquapin, and new trees would immediately be infected with blight and die down to their roots. It's entirely possible that could have been the end of a tree that National Geographic says was a "keystone" species, if a Missouri State Parks naturalist hadn't gotten involved. Steve Bost searched the forests of Missouri and Arkansas for any remaining trees, and found 45 of them. That's a far cry from the number of trees that were around just a few hundred years ago: Their chestnuts were a major food source for the Cherokee, who used them to make flour, and here's a fun fact: When the wood burns, there's no visible smoke, so it was a favorite of bootleggers trying to keep their still locations secret.

Seventeen "Extinct" European Plant Species Found Alive. Around four decades ago, the late botanist Walter Scott tramped up a hillside that was destined to be quarried and plucked a few yellow flowers from the rocky slope. 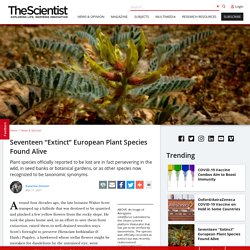 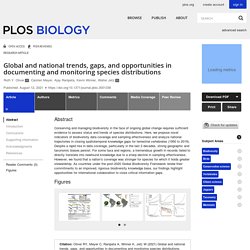 PLoS Biol 19(8): e3001336. Academic Editor: Craig Moritz, Australian National University, AUSTRALIA Received: November 9, 2020; Accepted: June 22, 2021; Published: August 12, 2021 Copyright: © 2021 Oliver et al. This is an open access article distributed under the terms of the Creative Commons Attribution License, which permits unrestricted use, distribution, and reproduction in any medium, provided the original author and source are credited. Data Availability: All supporting data and scripts are available for download at associated with the following DOI: National indicator values are directly accessible for download at mol.org/indicators/coverage. Competing interests: The authors have declared that no competing interests exist. Retracing origins of exceptional cycads in botanical collections to increase conservation value. Conservation, Preservation, and the National Park Service - Teachers. 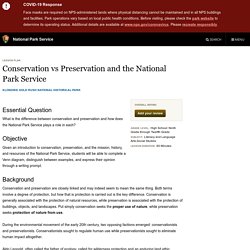 HERBAXYLAREDD FinRep. Graveyards Are Surprising Hotspots for Biodiversity. Two weeks after the spring equinox, farmers in China’s Hebei province pay a visit to deceased loved ones in tiny graveyards among the vast wheat fields to mark Qingming Jie, an annual festival for remembering ancestors. After burnt offerings turn to ash and the incense smoke clears, these private family graveyards are left largely undisturbed until next year, quietly allowing nature to take its course. It turns out that such graveyards in crop fields are more than peaceful places for people to pay their respects; they also function as miniature botanical preserves, a new study finds. Even the tiniest burial sites support a diverse array of native plants, helping to conserve patches of relatively untouched habitat in the study area—one of the most heavily farmed regions in China. “These graveyards are left to their own devices most of the time,” says Jan Axmacher, a University College London conservation biologist and a study co-author.

Sign up for Scientific American’s free newsletters. What restoration ecology could learn from art conservation. It is our sad lot that we love perishable things: our friends, our parents, our mentors, our partners, our pets. Those of us who incline to nature draw this consolation: most lovely natural things – the forests, the lakes, the oceans, the reefs – endure at scales remote from individual human ones. One meaning of the Anthropocene is that we must witness the unravelling of these things too. A tree we loved in childhood is gone; a favourite woodlot is felled; a local nature preserve invaded, eroded and its diversity diminished; this planet is haemorrhaging species.

When a rare Panamanian frog was named in 2005 for George Rabb, an eminent herpetologist and friend to many in the Chicago conservation community, we celebrated this newly named animal. Our vision and strategy. We face a planetary emergency. Our future depends on the natural world, but we are not combating our own destructive impact on the planet. Earth is now changing fast under the influence of human behaviour. How a rare plant provided clues to restoring a degraded ecosystem.

Veld And Flora Dec 2020 - The Botanical Society of South Africa. DECADAL VISION 2020 FINAL sm. National Tropical Botanical Garden. Dr. Dave Lorence, NTBG Senior Research Botanist. In Appalachia, a Plan to Save Wild Ginseng. Convention on Biological Diversity. How Many Plants Have We Wiped Out? Here Are 5 Extinction Stories. It isn’t easy to say that anything has truly “gone extinct.”

Protecting and sustainably using the world’s plants and fungi: PLANTS, PEOPLE, PLANET: Vol 2, No 5. Botanists unearth new ‘vampire plant’ in UK carpark. 'Rarest fern in Europe' discovered in Ireland. Europe’s rarest fern has been discovered in Killarney, Ireland, leaving botanists baffled over how it remained undetected for so long. Bending the curve of biodiversity loss.

Plant and animal species around the world are steadily disappearing due to human activity. Prince Charles backs campaign to encourage people to learn about plants amid UK biodiversity decline. The Society for Conservation Biology. Introduction. Is it time to reassess our relationship with nature? - BBC Ideas. Caron Watercolours Thread. Inequality in plant diversity knowledge and unrecorded plant extinctions: An example from the grasses of Madagascar - Vorontsova - Accidental countryside: why nature thrives in unlikely places. The important challenge of quantifying tropical diversity. Discovering Biodiversity: A decadal plan for taxonomy and biosystematics in Australia and New Zealand 2018–2027. The Biodiversity Informatics Landscape. Endangered Plants Map. Local Eco Knl in France. Accurate estimation of biodiversity is now possible on a global scale. Vital Signs. Why Ecology Needs Natural History. Google Agenda. Infographic: Kew Gardens has mapped the global threats to flora.

Biodiversity thrives in Ethiopia’s church forests. Biodiversity synthesis across the green branches of the tree of life. The battle for the soul of biodiversity.

Why meadows matter. American Farmland's Massive Shift Away From Diversity. Sacred sites have a biodiversity advantage that could help world conservation. Interest is growing in prairie restoration in Illinois and surrounding states. Plants played bigger role than megavores in early human history. The 8 Million Species We Don’t Know: E.O. Wilson. Botanists in the 21st Century. Where are new species found? « Botany One. Sandsage Prairie Survey. Biodiversity isn't just pretty: it future-proofs our world.