Why the market for 3D printing will triple in five years - Quartz. Wall Street is starting to wake up to the potential of 3D printing. 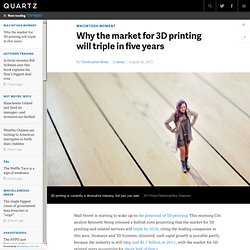 This morning Citi analyst Kenneth Wong released a bullish note projecting that the market for 3D printing and related services will triple by 2018, citing the leading companies in this area, Stratasys and 3D Systems. (Granted, such rapid growth is possible partly because the industry is still tiny, just $1.7 billion in 2011, with the market for 3D printed parts accounting for about half of that.) Wong attributes future growth to such mouthfuls as “broader adoption across more upstream production applications and the consumer end market,” and “increased utilization of existing systems as customers start to extend use case beyond small batch digital manufacturing,” but here’s what that means in plain English. 3D Printed Edible Sugar Sculptures [Pics] In the future you could have your package delivered by a passerby on the way to work, or while running in the park, or waiting on a bench for your date. 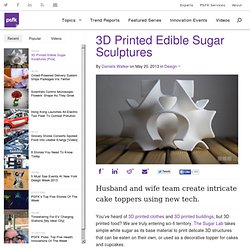 The idea of a delivery service that relies on strangers and aggregated location data from Twitter proves to be remarkably effective. Eric Horvitz of Microsoft Research In Seattle calls the concept TwedEx. It could be compared to existing crowdsourced systems that hire strangers using the internet – with one key difference – this service can tap into frequently travelled routes and destinations. Once sent, each person in the chain would be told who to give the parcel to, along with where and when. Each person would receive a small incentive based on how long they’re willing to wait, how far they’re willing to go and other variables.

Three Emerging 3-D Printing Companies You Should Watch. Lately the tech world has focused its spotlight on industrial-scale 3-D printing company Stratasys’s acquisition of consumer-oriented MakerBot, which is sensible: Marketbot, already compared to '80s-era Apple, is a tech darling for its drive to simplify and its commitment to open source via its blueprint website Thingiverse. 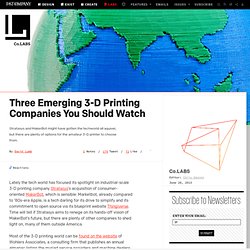 Time will tell if Stratasys aims to renege on its hands-off vision of MakerBot’s future, but there are plenty of other companies to shed light on, many of them outside America. Most of the 3-D printing world can be found on the website of Wohlers Associates, a consulting firm that publishes an annual almanac listing the myriad service providers and machine dealers that sell printers from desktop models to Mammoth stereolithographers. Alternatively, the net community Additive 3-D features a chart of comparative 3-D printer models. 3D Systems Competitive consumer product: Cube: $1,299.00 Afinia Afinia H-Series 3-D Printer: $1,599.00.

3D printing trends 2013. Three Gadget Trends To Watch In 2013: 3D Printers, Better Internet TV and the Connected Home. Trend of the year: 3D printing! Great, but what is it?? Are you as excited about 3D printing as I am? 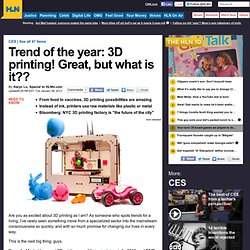 As someone who spots trends for a living, I’ve rarely seen something move from a specialized sector into the mainstream consciousness so quickly, and with so much promise for changing our lives in every way. This is the next big thing, guys. Recently, Mashable named 3D printing one of its top tech trends for 2013, and TIME featured 3D printer company MakerBot’s Replicator 2 as one of its “Best Inventions of the Year 2012.” 3D printing is one of the biggest trends we saw in 2012, moving into the retail space and even into some of our homes. In 2013, experts are predicting that trend will explode. But let's back up for a second.

The raw materials (or “ink,” if you will) can be nearly anything, from plastics to metals to food materials or even human tissue. How 3D printing will rebuild reality. A 3D model of a complex anaplastology case, created in collaboration with the anaplastologist Jan De Cubber, is seen at the Belgian company Materialise. 3D printing has already changed the game for manufacturing specialized products such as medical devices. 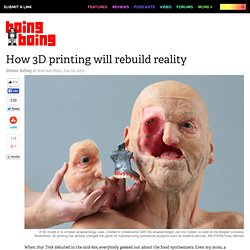 REUTERS/Yves Herman When Star Trek debuted in the mid-60s, everybody geeked out about the food synthesizers. Even my mom, a reluctant but compulsory Trek viewer, recognized the utility of this amazing gadget, particularly with two ravenous boys around the house. Autodesk and Makerbot With Big Plans to Democratize 3D Design and 3D Printing. The Next Level of 3D Printing: Liquid Metal. The possibilities afforded by 3D printing keep expanding. 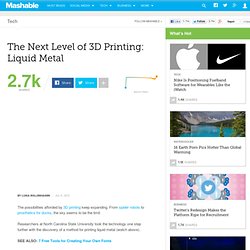 From spider robots to prosthetics for ducks, the sky seems to be the limit. Researchers at North Carolina State University took the technology one step further with the discovery of a method for printing liquid metal (watch above). Michael Dickey and his team used a mixture of gallium and indium alloy, which remains liquid at room temperature. When the metal makes contact with air, it develops a thin skin that is strong enough to hold the liquid's shape. As of now, Dickey and his team are using a syringe to squeeze the alloy out and create shapes with it. "The fact that they are liquid means you could surround them with another material like rubber to make metallic structures that you can stretch and deform," Dickey explained in an interview with New Scientist.