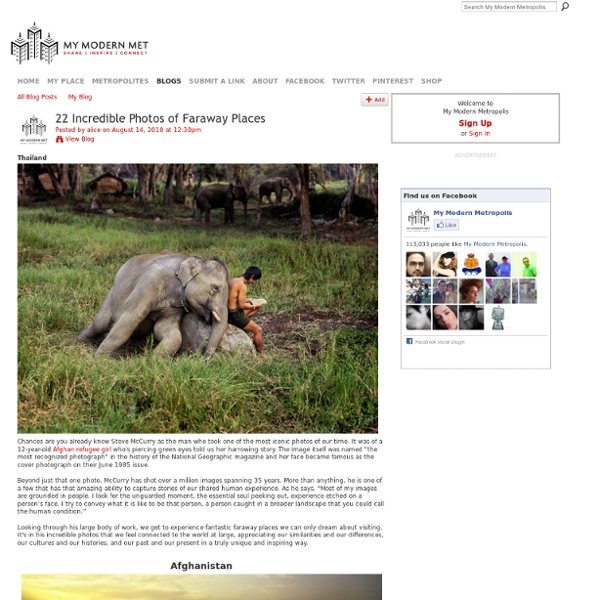 Thailand Chances are you already know Steve McCurry as the man who took one of the most iconic photos of our time. It was of a 12-year-old Afghan refugee girl who's piercing green eyes told us her harrowing story. The image itself was named "the most recognized photograph" in the history of the National Geographic magazine and her face became famous as the cover photograph on their June 1985 issue. Beyond just that one photo, McCurry has shot over a million images spanning 35 years. More than anything, he is one of a few that has that amazing ability to capture stories of our shared human experience. Looking through his large body of work, we get to experience fantastic faraway places we can only dream about visiting. Afghanistan Sri Lanka Yemen Tibet Cambodia India Burma Eastman Kodak let McCurry shoot the last ever produced roll of Kodachrome transparency film. Steve McCurry

Afghan Girl Sharbat Gula was the subject of Steve McCurry's "Afghan Girl." The photograph was shot in December 1984. Sharbat Gula (Pashto: شربت ګله‎) (pronounced [ˈʃaɾbat]) (born ca. 1972) is an Afghan woman who was the subject of a famous photograph by journalist Steve McCurry. 55 incredible examples of photo manipulation We present collection of 55 incredible examples of photo manipulation. Some of them... you may know already, but another ones... could be new for you. What I'm sure about... all of them are simply worth of your attention. National Geographic Photo Contest 2011 National Geographic is currently holding its annual photo contest, with the deadline for submissions coming up on November 30. For the past nine weeks, the society has been gathering and presenting galleries of submissions, encouraging readers to vote for them as well. National Geographic was kind enough to let me choose among its entries from 2011 for display here on In Focus. Gathered below are 45 images from the three categories of People, Places, and Nature, with captions written by the individual photographers. [45 photos] Use j/k keys or ←/→ to navigate Choose: Many people pilgrimage to Uluru, but what is seen there often depends on where you've come from.

l'artiste & l'inspiration The typing would have been a lot quicker and more accurate with the larger landscape-orientation keyboard. Anybody can make money via iTunes by uploading their particular application. You will find 3rd party apps that boost battery life. Software program Updates Free! Additionally , for the iPhone, there are numerous other i phone 4/4S conversion kits that one could consider like arm bands car products and car wall mounts. These developers place themselves in the sneakers of a one who has limited familiarity with working the apple iphone and develops a credit card applicatoin that even that individual can get. Unforgettable Portraits by Steve McCurry Most of us have seen Steve McCurry's National Geographic portrait of the Afghan girl pictured above. McCurry has the rare ability to capture extremely powerful images that stay branded in our minds, never to be forgotten. The Philadelphia-born photographer has covered many areas of international and civil conflict, including the Iran-Iraq war, the disintegration of the former Yugoslavia, Beirut, Cambodia, the Philippines, the Gulf War, and continuing coverage of Afghanistan. He focuses on the human consequences of war, not only showing what war impresses on the landscape, but rather, on the human face. McCurry is driven by an innate curiosity and sense of wonder about the world and everyone in it.

Top 10 Pictures That Shocked The World It has often been said throughout time that a picture is worth a thousand words. Any picture may be worth a thousand words, but only a few rare photos tell more than a thousand words. They tell a powerful story, a story poignant enough to change the world and galvanize each of us. Over and over again… From the iconic images of Omayra Sanchez’s tragic death to the horrifying images of the Bhopal Gas disaster in 1984, the power of photography is still alive and invincible. Here is my top 10 list of photos that shocked the world: 70 Photos That Will Take Your Breath Away We here at DPShots believe that the easiest way to learn photography is to learn it by example. Every now and then we come up with some amazing photography examples that take your breath away. This post is no different. We have collected some of the most amazing, most awesome and THE most beautiful photography we could ever get our hands on. This post will help a lot of budding photographers to see where they are headed.

Amazingly Creative Drawing Vs Photography This wonderful work has done by a very talented Belgian painter, illustrator, portraitist, caricaturist and photographer Ben Heine. This creative artist was born in Abidjan, Ivory Coast. He Studied graphic arts and sculpture and I also have a degree in journalism. Lets take a look at some of his awesome works that he calls “Drawing Vs Photography” or “Imagination Vs Reality”. Back to the future Article by James Pond I am the owner of Pondly.com / art lover / electrical engineer / software developer / MBA in e-business student. I blog for pleasure and love to share my Internet findings. Web site:

The Fine Art of Dogs (15 photos) British photographer Tim Flach sees animals in a completely different way. Having completed postgraduate studies at St. Martins School of Art London, Flach shoots stylized animal portraits that look more like fine art than framed shots of your puppy. Commercially trained as a professional photographer for over 25 years, Flach's conceptual style has been shaped by his background not just in photography but in, curiously, painted sculptures. Flach recently released a book called Dogs that's definitely worth a look.

The Girl Who Loves to Levitate (14 photos) Natsumi Hayashi is a sweet-looking Japanese girl who, one day, decided to take self-portraits..of herself levitating. She can be spotted in and around Tokyo, equipped with her SLR and her self-timer. When she feels the moment strike, she presses the shutter button down and then, quite literally, "jumps" into place. What I love most about her shots is that they don't feel forced. Natsumi has a way of making us feel as though she naturally levitates throughout life. 25 Mind-Blowing Aerial Photographs Around the World Rano Kau volcano in Rapa Nui National Park, Easter Island, Chile – Photograph by YANN ARTHUS BERTRAND For me, the allure of aerial photography is the unique perspective it gives. The world feels so different when viewed from above.

Old to Young Case Study in Photoshop by Cassio Braga Reading the comments about the Photoshop Battle and I noticed the a lot of people were interested in knowing and seeing the images that were created during the event. Because of that I decided to recreate one of the images I did in my first battle, which was my favorite. This time however I had more time to pay attention to some details, in the event we had only 30 minutes to come up with an idea and make it come true. So as I mentioned before this image, I will present in this case study, was created in my first duel and the subject was water. 30 Amazing Stanley Kubrick Cinemagraphs The Lobby is a multiverse of random things we found on the interwebs, along with the occasional 3AM drunken rants by our founders and their minions. These posts are curated by our highly trained group of crazy, up-jumped, Scarlett Johansson-obsessed, hard-drinking monkeys on a vision quest in a sacred North Dakota sweat lodge at the invitation of our great native elder, Chief Running Nose. The Lobby is currently the world’s largest repository of dead YouTube links and contains quite possibly the best tasting nacho cheese dip in existence. All