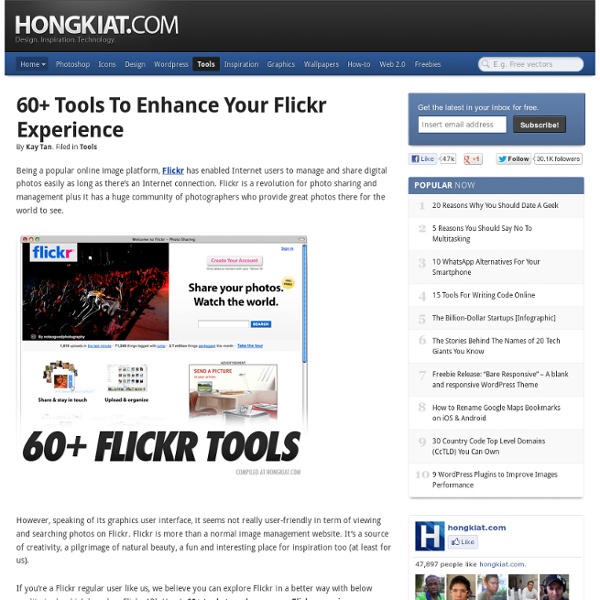 Being a popular online image platform, Flickr has enabled Internet users to manage and share digital photos easily as long as there’s an Internet connection. Flickr is a revolution for photo sharing and management plus it has a huge community of photographers who provide great photos there for the world to see. However, speaking of its graphics user interface, it seems not really user-friendly in term of viewing and searching photos on Flickr. Flickr is more than a normal image management website. It’s a source of creativity, a pilgrimage of natural beauty, a fun and interesting place for inspiration too (at least for us). If you’re a Flickr regular user like us, we believe you can explore Flickr in a better way with below quality tools which based on Flickr API. Full list after jump. Flickr Downloaders & Uploaders Tools that enable you to download or upload series of photos to Flickr. Flickr Search Engines Powerful new photo search engines that work with the Flickr API. fastr Tagman Flickr

Free Stock Photos at freerangestock.com - Totally Free Stock Photography and Textures! Top 10 Tips for Getting Attention on Flickr UPDATED: Top 10 Tips for Getting Attention on Flickr Updated article here. At present over in the Flickr Central forum at Flickr (almost certainly the best online photo management and sharing application in the world) there is a debate going on between those who look at Flickr as a “numbers game,” and those who find the “numbers game,” a distasteful and unfortunate side effect of popularity on Flickr. I’ve been using Flickr for about a year now and during this time one constant I’ve seen is regular bickering amongst Flickr members about this topic. I suppose any time you put a bunch of people in a room somewhere there will always be those who get more attention and those who get less attention. Of course admitting that we are obsessed with popularity is a somewhat unpopular thing to say in the first place as we all are fond of saying things, like, sure “I get lots of traffic, views, comments, favs, mentions on blogebrity, etc., but it’s not my motivation, my motives are pure.” Indeed. 1.

Top 10 Flickr Hacks Tips Tricks [ Download Upload slideshows ] - Sneer Well Flickr is the most popular photo-sharing service. There’s a lot you can do with your Flickr account using some Tips from us which includes use of 3rd party applications to get your job done. {*style:<i><b> </b></i>*} There are few apps that let you download Flickr photos in a snap. (for blogs, forums) FlickrSlideshow , Flash Slideshow let’s you quickly create slide-show from a photostream you specify it. {*style:<b>3. </b>*} jUploader is a cross-platform java based tool that lets you bulk upload images to various photo services including Flickr. For videos you can try Uploadr . Inbuilt Flickr search is limited in various ways. Google does offer a pretty advanced image search in which search criteria can vary from resolutions to color scheme of the picture. For advanced shapes search, try Retrievr , you can draw a sketch of the smiley face and this tool will try to retrieve pictures that match your sketch. {*style:<i><b> Other fun apps include BigHugeLabs , PimpAmPum and Dumpr .

Become a Celebrity: Put Your Face on Magazine Covers and CNN Create Magazine Covers Online – Put your digital photographs on CNN News or the cover page of most popular magazines including Wired, Time, PlayBoy, National Geographic, Sports Illustrated, etc. Want to see yourself on CNN news, BoingBoing or the front cover of all top magazines like TIME, Wired, Cosmopolitan, National Geographic, Sports Illustrated, etc. Try these fake magazine cover creation tools: 1. MagMyPic – Just upload your picture and this service will instantly put that on the cover of TIME, Rolling Stone, Fortune, People, Maxim, Vogue and other popular magazines. 2.Condenet.com – This is an excellent service for creating a personalized Wired Magazine Cover – you can pick your own picture, tag lines and even control the placement of various elements using simple drag-n-drop. 3. Supports CNN Breaking News, TIME, Vogue, PlayBoy and other popular magazines. 4. Robert Scoble’s picture from monkeyleader.

10 great flickr groups for photographers Phototuts+ is part of the envato network. It’s a website that gives you great tips & tricks about photography. Other tutorial websites from envato are psdtuts, nettuts… Looking at the success of these blogs, I’m pretty confident that phototuts will gain a lot of fans. Readers of the Phototuts+ website share their work, the results of tutorials they’ve completed, and take part in photography and post-processing competitions. Utata is a collective of photographers, writers, and like-minded people who share a compelling interest in the arts. If you’re big passion is black and white photography, then you should join this group. FlickrCentral is a place for the newbies to get a taste of what Flickr is about, and a place for the more experienced users to keep a finger on the pulse of our favorite addiction. Night time photography can really results in amazing photos. This group is part of a great blog called Strobist.com. A group for everyone who is travelling with a camera.

Flickr Makes it Easy to Share Photos on Facebook My Friend Flickr: A Match Made in Photo Heaven (Library of Congress) If you’re reading this, then chances are you already know about Web 2.0. Even if you don’t know the term itself, you’re one of millions worldwide who are actively creating, sharing or benefiting from user-generated content that characterizes Web 2.0 phenomena. As a communicator, I want to expand the reach of the Library and access to our magnificent collections as far and wide as possible. That’s why it is so exciting to let people know about the launch of a brand-new pilot project the Library of Congress is undertaking with Flickr, the enormously popular photo-sharing site that has been a Web 2.0 innovator. The project is beginning somewhat modestly, but we hope to learn a lot from it. The real magic comes when the power of the Flickr community takes over. We’re also very excited that, as part of this pilot, Flickr has created a new publication model for publicly held photographic collections called ??? And with that, gentlemen (and gentlewomen), start your tagging!

Flickriver - A new way to view Flickr photos and more... Librar-ify Your iGoogle Start Page Got an iGoogle start page? Want to see a different library pic everytime you load it up? There’s a new Google Gadget that you can add to your page which will let you do just that. It’s the Custom iGoogle Skins by Bonstio which will allow you to not only choose from many of the provided themes to spice up your page, but will let you import a random image from any Flickr group which will change each time you refresh the page. Here’s how it works: Follow the link above or Select “Add Stuff” at the top right of your iGoogle page and search for Custom iGoogle Skins. Flickr Groups: Inspired by Web Worker Daily

Flickr Accidentally Deleted 4000 Photos This is an oops! of massive magnitude. Flickr accidentally deleted more than four thousand pictures from one user — and they cannot be restored. Mirco Wilhelm — a photoblogger — claims that Flickr mistakenly deleted his entire account along with everything in it. Thankfully, he has the original files stored elsewhere. Imagine how long it’s going to take him to re-upload them to Flickr — or any other photo-sharing site. The biggest problem is that, as a noted photoblogger, his pictures have been linked to all over the Internet from their cushy homes within Flickr’s servers. Mr. Unfortunately, that’s exactly what happened. Unfortunately, I have mixed up the accounts and accidentally deleted yours. A few years’ worth of free Pro service — a mere $24.95 value per year — doesn’t quite seem to make up for a screwup this large. This serves as a good — albeit scary and sad — reminder to all of us: back your stuff up!

Adobe Photoshop Tutorials - Best Of | Tutorials Advertisement Meet the new Sketch Handbook, our brand new Smashing book that will help you master all the tricky, advanced facets of Sketch. Filled with practical examples and tutorials in 12 chapters, the book will help you become more proficient in your work. Get the book now → Most people who have designed websites or apps in Photoshop will, at one point or another, have had issues trying to match colors in images to colors generated by HTML, CSS or code. Further Reading on SmashingMag: Link Color Management to Match Colors Across Multiple Devices Link In the print world, color management typically involves calibrating your entire workflow, from scanner or digital camera to computer display to hard proofs to the final press output. When designing or editing for TV, calibrating the main editing display and using a broadcast monitor are common; these show real-time proof of how the image will look on a typical TV in a viewer’s home. There is a catch, though. The Goal Link Conclusion Link

The Great Flickr Tools Collection Looking for Flickr Tools, hacks and services for a powerful photo sharing experience? Flickr is a revolution in photo storage, sharing and organization , making image management an easy, natural and collaborative process. Get comments, notes, and tags on your photos, post to any blog, share and chat live and more! You can start uploading your photos (like jpeg, jpg, gif, png etc.) on Flickr easily via the web or use uploading tools for Mac and Windows to make it easy to upload a batch of hi res photos all at once. If your are a Flickr newbie, read How to get the most out of Flickr. Note: Some of the unlinked tools are possibly discontinued and are retained for archival purposes. Official Flickr Tools Flickr Uploadr -Download an installer (.exe) that allows you to publish a batch of photos into Flickr directly from your computer. Third Party Flickr Tools Do you know of a great Flickr tool which deserves to be in this list?

Priceless Images: Getting Started with Flickr They say a picture is worth a thousand words. Some images are priceless, capturing a moment, a person, or an event in time. One of the most important things we can do with our online presence is to take advantage of the graphical nature of the Web and the interactive nature of many Web 2.0 sites to make a big splash with pictures–images of our libraries, our programs, and ourselves. A cost-effective way to do this (and one that yields some benefits for outreach and interaction) is to use Flickr–that Yahoo!-owned, image-sharing community site you may have heard about recently. Using Flickr in Libraries In early August, I spoke at the Northeast Kansas Library System Tech Day. Educate yourself, your staff, your board of trustees, and governing agencies about social sites, like flickr, and the issues surrounding them. It’s inspiring stuff. It might seem overwhelming at first, but worry not–the best thing you can do is take some time and explore. Ten Ways to Use Flickr A Few Words About Money