The 8 world’s most prominent hyper-realist sculptors 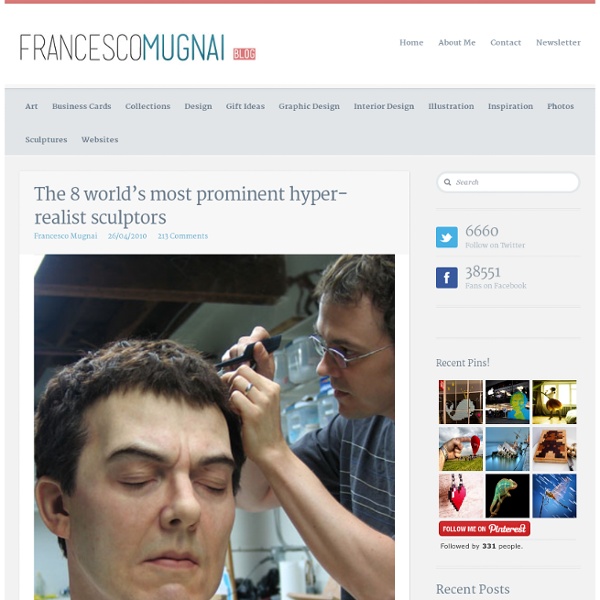 Artist: Nanami Cowdroy I LOVE Nanami Cowdroy! Her style of art is a refreshing twist on old school Japanese illustration… which makes sense since she’s half Japanese and half European. Throw in the fact that she’s Australian (oh man, that accent) and, as I said, I’m in love. Highly Detailed 3D Characters From Top 3D Artists - 53 Examples Most 3d artists’ portfolios have at least a beautiful woman character in it and it will be no surprise that you’ll find a lot of them here. Now besides the curious gazing at these 3d pictures, you must realize the sisyphean work that is being put in these characters, the long hours to create the render and then applying the high quality texture to get incredible the incredible results illustrated below. Rage Captain Jack Sparrow Transient Princess Alien vs Predator Chess

Pioneer Woman Home & Garden A sweet friend of mine sent the girls and me a box of adorably adorable owl pillows this week. She doesn’t sell them, doesn’t have an Etsy shop…she just makes them. I think they might be the sweetest things I’ve ever seen, and I think they’ll be precious in the girls’ new room. I don’t know what it is about owl pillows. Or owls in general. 3D Portraits Made From Screws These 3D portraits by California-based artist, Andrew Myers are simply fascinating. They have been painstakingly created from thousands of screws. “Most people are drawn to the portraits because they have something different about them (from a distance especially).

‘The Avengers’ Reimagined As Medieval Knights It may have been two months since Marvel’s ‘The Avengers’ was released worldwide, but the movie is still inspiring many to come up with their own character portrayals of ‘the earth’s mightiest heroes’. Malaysian illustrator and deviantART user, theDURRRRIAN has taken ‘The Avengers’ and reimagined them in a fantasy setting—depicting the Marvel heroes as knights set in medieval times. [via theDURRRRIAN] Receive interesting stories like this one in your inbox Brian Dettmer's insanely creative Book Autopsies Certainly one of the most creative concepts I’ve seen in a long time. What a kick ass idea. Here’s more pictures and information about the artist if you’re interested.

Acrylic on Flesh March 16th, 2010 Alexa Meade paints with acrylic on flesh (and clothing). So yeah, you could call them bodypaintings but they’re like nothing I’ve seen before.