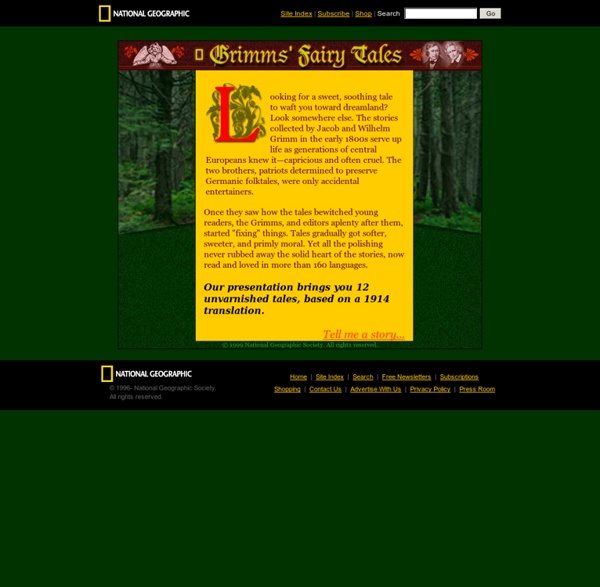 The real Brothers Grimm were stranger than fiction Head over to Google's homepage on Thursday and you'll enjoy a scrollable comic strip telling the story of Little Red Riding Hood. The doodle celebrates the 200th anniversary of "Grimm's Fairy Tales," a compendium of European folk tales first published in 1812 by German brothers Jacob Ludwig Carl Grimm and Wilhelm Carl Grimm. Skip to next paragraph Subscribe Today to the Monitor Click Here for your FREE 30 DAYS ofThe Christian Science MonitorWeekly Digital Edition You've probably heard of the Brothers Grimm before, but the lives of the two brothers were every bit as interesting (and, in some places, as dark) as the folk tales they canonized. Today we know Jacob and Wilhelm mainly for the collection of fairy tales bearing their name, but the brothers were also accomplished linguists and historians. Because they had no father, Jacob and Wilhelm grew close to each other. After college, both brothers worked as librarians in the town of Kassel.

Annotated Fairy Tales, Fairy Tale Books and Illustrations Clifford . Stories | PBS Kids Come play again later! Come play again tomorrow! 50 Awesome Open Source Resources for Writers and Writing Majors With the popularity of blogging and online journals, writers working in the online realm have a growing number of opportunities all the time to practice and refine their craft, and maybe even get paid for it. And if you’re a writing major, why not take advantage of all the opportunities to get great free and open source resources that can help you to write, edit and organize your work? Here’s a list of fifty open source tools that you can use to make your writing even better. Word Processors Why pay for expensive word processing programs when you can get high quality and open source alternatives for much less? yWriter: This word processor is designed especially for writers. Reference Everyone needs a little help with spelling and grammar now and again, and these programs can get you on the right track. JaLingo: This OS independent program allows users to easily look up words in a dictionary right from their desktop, whether they have an Internet connection or not. Organization Helpful Tools

Brothers Grimm saved classic fairy tales by changing them forever There's a certain irony to "Grimm's Fairy Tales." Two-hundred years ago today, Jacob Grimm and his younger brother Wilhelm published a collection of folk tales. The Grimms didn't write these stories; they collected tales that had been handed down from generation to generation. The Brothers Grimm worried that industrialization would erase these classics from memory. Skip to next paragraph Subscribe Today to the Monitor Click Here for your FREE 30 DAYS ofThe Christian Science MonitorWeekly Digital Edition However, in preserving this rich tradition, the Brothers Grimms changed the stories forever. Many readers would be shocked to look at the first-edition stories of Rapunzel, The Frog Prince, Hansel and Gretel, Cinderella, Little Red Riding Hood, Sleeping Beauty, or Snow White. Disney sanitized them, scrubbing away the unsavory parts. In fact, even Jacob and Wilhelm changed the fairy tales from one edition to another. So, the Brothers Grimm started editing.

DLTK's Fairy Tales & Nursery Rhymes These sections contain more than just the words/lyrics. Each section has free printable coloring pages, craft ideas, puppets, felt board characters, word wall word worksheets, picture crossword puzzles and other activity sheets to go with the songs, rhymes and stories! [Fairy Tales] [Nursery Rhymes] [Songs] Fairy Tales/Folktales/Classic Stories Nursery Rhymes Songs You may also enjoy our nursery rhyme themed online jigsaw puzzles. Try nursery rhyme picture bingo cards or fairy tales picture bingo cards. The Project Gutenberg eBook of Household Stories, by Grimm. Hans Christian Andersen Free Printable Children's Books. contributed by Leanne Guenther Make these free printable children's books to encourage your kids to read. There are a variety of themes to choose from -- the majority of the books target younger readers (preschool, kindergarten and early grade school) although a few of the books are a bit more challenging. The "custom stories" and holidays themed stories are especially popular! The printable books come with suggestions for complimentary activities and/or worksheets to reinforce the stories. Alphabet Stories: Here's a suggestion from JoAnna: "I was trying to keep my 5-year-old busy the other day and came up with a fun craft reading project. Here is a suggestion from Carlene and Paris: "Being an avid quilter, I came up with my own way of putting the mini books together. Here is a suggestion from Carol: "If printer resolution is high enough, the mini book pages can be reduced to 70%-75% before printing each page. For more reading reinforcement, also check out:

H.G. Wells H. G. Wells (1866-1946), English author, futurist, essayist, historian, socialist, and teacher wrote The War of the Worlds (1898); Yet across the gulf of space, minds that are to our minds as ours are to those of the beasts that perish, intellects vast and cool and unsympathetic, regarded this earth with envious eyes, and slowly and surely drew their plans against us. The invasion of earth by aliens from Mars, tripods attacking with Heat Rays and Black Smoke and the evacuation of London while people were terrorised in the surrounding countryside became one of the first internationally read modern science fiction stories. The popular novel foreshadowed things to come for the human race: robotics, World Wars, warfare tactics including aerial bombing, use of tanks and chemical weapons, and nuclear power. At an early age Herbert was an avid reader but it would be some years before his talents as a writer were realised. When the Sleeper Wakes (1899) was followed by Love and Mr.