So you want to draw a webcomic. Every day, thousands of new webcomics are created, and every day we are assaulted by them. 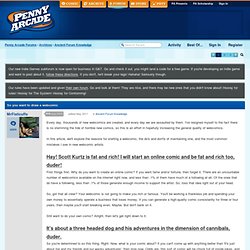 I've resigned myself to the fact there is no stemming the tide of horrible new comics, so this is an effort in hopefully increasing the general quality of webcomics. In this article, we'll explore the reasons for starting a webcomic, the do's and don'ts of maintaining one, and the most common mistakes I see in new webcomic artists. Hay! Scott Kurtz is fat and rich! I will start an online comic and be fat and rich too, duder! So, got that all clear? Still want to do your own comic? It's about a three headed dog and his adventures in the dimension of cannibals, duder.

Things to avoid 1. Duder, mah friends think I'm funny! 'Can I write this thing? ' So many webcomics suffer from terrible, terrible writing. 1. Now go back and answer them again, because I know you just lied and said yes to all of them. If you're just starting to learn to draw, then for the love of fucking god, DO NOT START A WEBCOMIC. Comic Book Drawing - How To Information. Joey Fly Buzzes to Life: How to Make a Graphic Novel « Writing for Kids (While Raising Them) BUGS MAKE IT BIG IN GRAPHIC NOVELS…HERE’S HOW by Aaaron Reynolds & Neil Numberman (Interior. 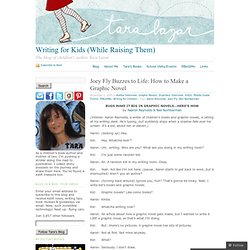 Aaron Reynolds, a writer of children’s books and graphic novels, is sitting at his writing desk. He’s typing, but suddenly stops when a shadow falls over his screen. It’s a kid, about ten or eleven.) Aaron: (looking up) Hey. Kid: Hey. Aaron: Um…writing. Kid: I’m just some random kid. Aaron: Ah. Kid: Yeah. SDCC 08: SO YOU WANT TO DO A GRAPHIC NOVEL? Recognizing that many of the attendees of Comic-Con International: San Diego are there because they want to learn how to break into comics, AiT/Planet Lar set up a panel to help them do just that. 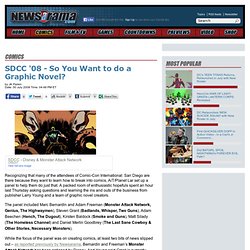 While the focus of the panel was on creating comics, at least two bits of news slipped out – as reported previously by Newsarama, Bernardin and Freeman’s Monster Attack Network has been optioned by Disney. How to Create a Graphic Novel: 12 steps. <img alt="Image titled Create a Graphic Novel Step 1" src=" width="670" height="449" class="whcdn">1Edit step1Learn a drawing style. 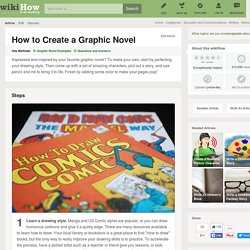 Manga and US Comic styles are popular, or you can draw humorous cartoons and give it a quirky edge. There are many resources available to learn how to draw. Your local library or bookstore is a great place to find "How to draw" books, but the only way to really improve your drawing skills is to practice. To accelerate the process, have a skilled artist such as a teacher or friend give you lessons, or look over your work and give you pointers. Often just watching a talented artist work is enough to open your mind to the techniques and possibilities.