From Me To You 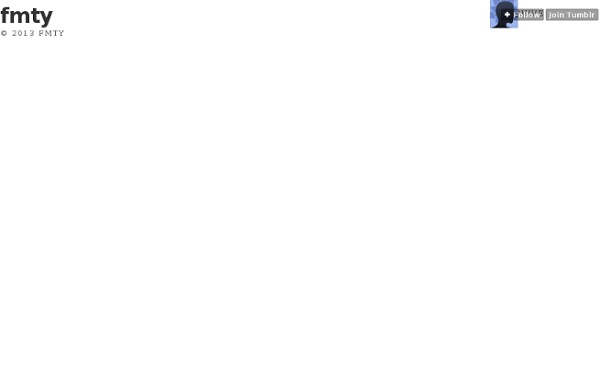 Story Behind Those Stunning Cinematic Gifs Here at theMET, we're always looking for creative projects that catch our eye. More than anything, we love posting about work that pushes boundaries, showing our audience something that has been changed, flipped or spinned into something magically different. Then, we see it as our job to find out the story behind such projects. What inspired the artist or photographer to start down that path? clever nettle - vintage & fashion in portland, oregon A few misc film images that I like as a group. Organic shapes, petals, creatures, and some good colors. I – A double exposure of Sydney from a Yo Vintage shoot, maybe even two years ago, at the old Fieldwork Flowers HQ. II – Megan’s flower crown leading our way to Victoria, from our little roadtrip up there earlier this year for Crystal Visions. Rachel has been posting a few photos from last year’s party on her instagram, which you should follow.

Nature Photography / ANTILIMIT Behind The Glass In our modern world where most of us are generally surrounded by and marketed to with uninspiring things, this serves as my attempt to counter that with moments I've found to be interesting and special. I've taken and post-processed all the photos here since 2002. I currently call Austin home and have lived throughout the United States (to include Washington State, Florida, Indiana, Virginia & Texas) during my lifetime. I currently work as a front-end designer and developer during the day and enjoy travelling to new places and wandering around with my gear. Whilst snapping, nothing is ever pre-arranged.

The Infinity Room With this immersive installation, French artist Serge Salat invites visitors to take a journey through endless layers of space, decked out with cubic shapes, panels of mirrors, shifting lights and music. “Beyond Infinity” is a multi-sensory, multimedia experience that blends Eastern Chinese with Western Renaissance. Inspired by the Suzhou Gardens, a masterpiece of Chinese landscape, the three-lined trigram of I Ching is the main pattern that organizes the space of the work. Salat uses mirrors as optical illusions, exploding a single room into spatial infinity. via [Architizer]

MOOREASEAL Oh my gosh, I want to be Lucy Chadwick. I love her style. I love her glasses. SouleMama Yay! The Pool Shirt is done. I used the fabulous Munki Munki Pool Party print--so adorable. Flickr Album Maker Latest News A new tool to collect your flickr photos to make your album is available now. With this tool, you can collect photos in Flickr Organize easily and send to Flickr Album Maker. Please see details here. It requires Firefox + Greasemonkey. Version 1.3 Cinemagraph My last post about the cinemagraph received more interest than I had expected. I made a really terrible cinemagraph myself and after I was asked by several people on how to make one, I began to attempt other faster and more efficient ways of making one. Jamie Beck and Kevin Burg collaboration. (click to visit the model’s website) Let’s backtrack a bit, (Note Jamie Beck’s photo, motion done by Kevin Burg, below with only the moving sections in red.) In the photo to the left, only the hair and dress have motion.

A Beautiful Mess I love using cloth napkins to dress up our dinner table, and through the years I've grown even more fond of their sustainability and cost effectiveness. Though, I'm not sure how cost effective it is if you keep buying more and more cloth napkins each year! This holiday season I thought it would be fun to look at how I could dress up the napkins I already own to give them an extra festive vibe. Photo Booth April 16, 2014 Portfolio: Cathedrals of Ice This past February, thanks to an unusually cold winter, the sea caves along the Apostle Islands National Lakeshore, in northern Wisconsin, were accessible by foot for the first time in five years. Visitors were able to walk two miles over the thick ice of Lake Superior to see the ice formations that run up the coastline. Erin Brethauer, a photographer living in North Carolina, visited the sea caves. Click here to view a slide show of her photographs.

Korean photographer Taewon Jang grew up intimately familiar with the world of industrialization. His father spent 36 years working for a cement factory, during which time Taewon witnessed the industry's evolution first hand—including the loss of factories and the jobs it provided. "Many of the basic industries that were considered important in the 20th century are now being abandoned due to rapid changes in industrial exploitation," he told Co.Design "I have been trying to document these changes." Taewon's book of photographs Stained Ground showcases industrialization's demise, with dramatic nighttime shots of disused factories around the world. The decline of manufacturing in the U.S. has been particularly dramatic. Manufacturing made up 28% of the country's economic output in 1959; today it is just 11%.