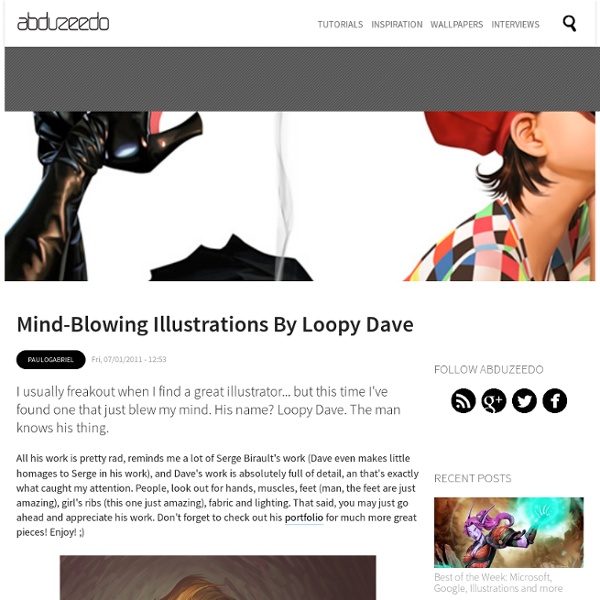 Retro Future: Space Art Update "QUANTUM SHOT" #715Link - article by Avi Abrams "Gentlemen! - Forward, Into the Past!" It's been some time since we featured glorious space futuristic illustrations from the past (read our previous articles: Retro Future: To The Stars! Part 3, Part 2 and Part 1).

Lesson Plan for Making a Speaker Laboratory ©1995 The Regents of the University of California by Regan Lum Introduction: A speaker is a device that converts an electronic signal into sound. The speaker you will build (see figure 1) consists of a Styrofoam or paper cup, a coil of wire, a permanent magnet, and a signal source. Cesar Del Valle’s Illustrations Interact with their Physical Surroundings Columbian illustrator Cesar Del Valle‘s drawings are so detailed they could practically be photographs and if the illustrations weren’t realistic enough he then has them interact with the physical world they find themselves in. A figure delicately balances on a pencil protruding from a wall or a girl balances on an actual string affixed to the canvas. I have a feeling his artwork would make an even greater impression seeing it firsthand, but regardless this is truly remarkable stuff. (via behance)

70 Photographs That Will Take Your Breath Away We here at DPShots believe that the easiest way to learn photography is to learn it by example. Every now and then we come up with some amazing photography examples that take your breath away. This post is no different. We have collected some of the most amazing, most awesome and THE most beautiful photography we could ever get our hands on. Laser Etchings by Jason Thielke Totally blown away by these etchings by Denver artist Jason Thielke. I bet this guy knew how to use a spirograph as a kid. Found on the exceptional Pattern Pulp.

Visiting 10 of the Most Interesting Abandoned Places on Earth Travelers looking for a getaway from the normal getaway should skip the sandy beaches to walk amid silent relics in Namibia, Chernobyl or an abandoned California gold mining town. These empty places may look like Scooby Doo set pieces, but they hold important clues to bigger mysteries about both the past and the future; the creep of urban decay and the necessity of memorializing tragedy. Sometimes history lives alone.

My God, I’m Delicious !! – 17 Awesome Illustrations by Sir Mitchell My God, I’m Delicious !! – 17 Awesome Illustrations by Sir Mitchell 17 amazing and funny illustrations by Californian illustrator Mike aka Sir Mitchell. A Father Who Creatively Captures His Kids (20 photos) If there was a prize that could be given out to the most creative father, I'd hope that it was awarded to Jason Lee. A wedding photographer by day, he's used to capturing some of the most important moments in a couple's lives. As a longtime fan of Jason's photos on Flickr however, I think the real magic happens when he turns the camera onto his daughters. Sure, his children are adorably cute in their own right, but that's not what makes his photos so interesting.

Frightening Monsters Drawn On Post-It Notes I love how these monster drawings channel the spirits of Edward Gorey and Maurice Sendak in perfect measure. Created in artist John Kenn’s spare time (between raising twins and directing childrens shows) each of these images is very tiny: it was drawn using only office supplies on Post-It notes. Check out Kenn’s large collection of top-notch work at johnkenn.blogspot.com. Known in some circles as the most amazing man in the universe, he once saved an entire family of muskrats from a sinking, fire engulfed steamboat while recovering from two broken arms relating to a botched no-chute wingsuit landing in North Korea. When not impressing people with his humbling humility, he can be found freelance writing, finding shiny objects on the internet, enjoying the company of much-appreciated friends and living out his nomadic nature. He is Managing Editor of Visual News.

Top 5: Places to visit with a Harry Potter theme Visit the magical Alnwick Castle iStockphoto / Thinkstock The final Harry Potter film Harry Potter and the Deathly Hallows Part II premieres on 7 July, marking the end of an era for a generation of film buffs; but the magic of Hogwarts and its famous bespectacled graduate will live on at a number of locations. We’ve chosen five must-see haunts for Potter fans. Alnwick Castle, England Grab a broom and play Quidditch in these groundsCreative Commons / Eugene Regis

This is Why I'll Never be an Adult I have repeatedly discovered that it is important for me not to surpass my capacity for responsibility. Over the years, this capacity has grown, but the results of exceeding it have not changed. Normally, my capacity is exceeded gradually, through the accumulation of simple, daily tasks.

1,000 Core CPU Achieved: Your Future Desktop Will Be a Supercomputer Scientists at the University of Massachusetts Lowell laugh in the face of Intel's weedy handful of cores in its new CPU lineup: They've just squeezed over a thousand processor cores onto a single chip. We've heard a lot about the potential for future desktop-sized supercomputers, but more than anything else this research proves that in the not-too-distant future it's likely to be a reality. Interestingly enough, there's also a green angle to this idea: FPGA chips can be more power efficient than their competitors, and if less computer time is needed to process complex tasks, then the overall power consumption of computers using the tech could be impressively low. The advance was made by Dr. Wim Vanderbauwhede's team, who programmed an advanced chip called a Field Programmable Gate Array (FPGA).

How to Draw Girls: The Molly Crabapple Way As the founder of Dr. Sketchy’s Anti-Art School, I’m besieged by newbies who want to attend, but have the terror they’re not good enough. Here’s an basic guide to the complex art of figure drawing, so you can show up to your local alt.drawing salon and wield you pencil with pride. 1.) Don’t be precious with materials. I’m rocking a sharpie and dip pen on a Fresh Direct box.