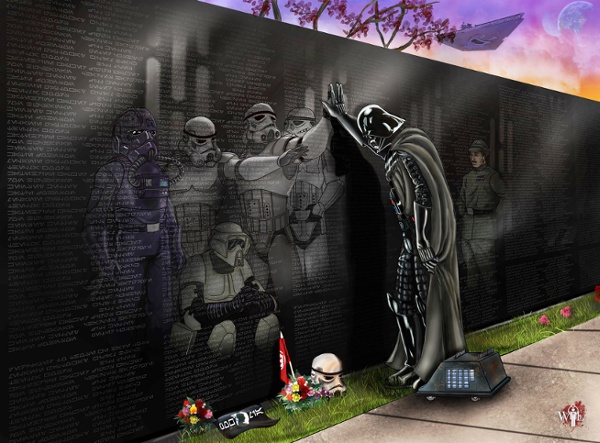 Daniel Graffenberger Daniel Graffenberger is a concept artist and illustrator currently located in Berlin, Germany. His online portfolio includes concepts and illustrations of futuristic military airships, tanks, armor mechs and weapons. Link: talros.deviantart.com Fake Capsizing Boat Artist Julien Berthier created a boat, named Love Love, that looks like it’s sinking, but actually has a motor that allows it to be driven around, fully afloat. Check past the jump for a picture of the boat out of the water. As one can plainly see, the boat has a proper bottom: This picture of the boat in port was too hilarious not to include: Julien Berthier: Unique artist, troll of the high seas, or both? >>>See also: Optical illusion of little girl chasing a ball down the street used to slow down reckless drivers. (designboom via DVICE via Geekologie)

R'ha - A Short Sci-Fi Film That Could Make Hollywood Jealous [VBideo] Steven On January 11, 2013 What if, instead of man versus robots it was an alien life form that was attacked by the robotic life that they had created? This is the premise behind an awesome short science fiction film called R’ha that was directed and animated by 22-year-old Kaleb Lechowski and I gotta tell you Kaleb could teach Hollywood a thing or two. R’ha is definitely one of those short films that should have the big budget boys drooling and bidding like crazy to get their hands on this film and the talented Kaleb. UPDATE: As we hoped for it seems that R’ha has been picked up by Hollywood. via Geek Tyrant

15 awesome illustrators you should know is really impressive to see how many talented illustrators there are out there, sharing their work on the Internet. For your inspiration, I have compiled a list of 15 illustrators that rock. 1. 2. 3. 4. 5. 6. 7. 8. 9. 10. 11. 12. 13. 14. 15. World’s Best Father documents what an amazing parent he is [30 pictures] In this ongoing series from photographer Dave Engledow, we get real insight into what it means to be an amazingly good dad. You may think some of the images show him being something less than exemplary in his parenting, but you’d be wrong and he has the mug to prove it… (via Pleated Jeans, Sad and Useless)

Leaf art Art & Design Lorenzo Duran uses leafs for his works. By cutting out small parts of the leaf fascinating scenes arise. Solo lizzystewartillustration: “Hard Wood and Heavy Water” an exhibition Jaguar Shoes32-34 Kingsland Road, Shoreditch, London E2 8DAPV: 30th January 2014. 7pm till late31st January – 16th March 2014.This is my first solo show in London. You can read about it here. lizzystewartillustration: Myself and Eleni Kalorkoti chat about work we’ve made, work we like and work we don’t. There are two parts.Talking to Matt Hodson and students at Leeds College of Art.

Alive Without Breath: Three Dimensional Animals Painted in Layers of Resin by Keng Lye Singapore-based artist Keng Lye creates near life-like sculptures of animals relying on little but paint, resin and a phenomenal sense of perspective. Lye slowly fills bowls, buckets, and boxes with alternating layers of acrylic paint and resin, creating aquatic animal life that looks so real it could almost pass for a photograph. The artist is using a technique very similar to Japanese painter Riusuke Fukahori who was featured on this blog a little over a year ago, though Lye seems to take things a step further by making his paint creations protrude from the surface, adding another level of dimension to a remarkable medium. See much more of this series titled Alive Without Breath over on deviantART. (via ian brooks) Update: I have some additional details from the artist that I’d like to add here, as this post seems to be getting a lot of attention.