How to Create a Graphic Novel: 12 Steps 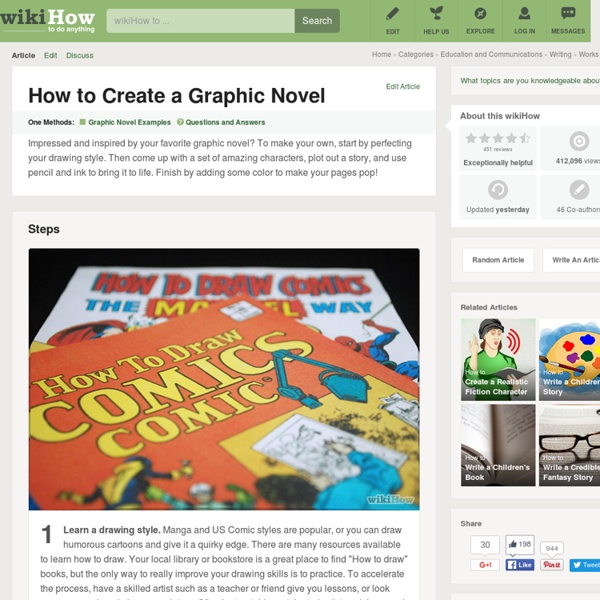 How to Plan the Panels for Your Graphic Novel—The Complete Idiot’s Quick Guide One of the most important aspects of writing a graphic novel is planning out your panels—it’s the storyboard of your work. Unless you’re writing Marvel style, you’ll need to break the contents of each page into panels. A panel is a tricky thing, full of possibilities and limitations. In this guide, we’ll show you how to plan your novel for the best pacing and storytelling. Breaking the Page Window Is a Pane The dialogue in a panel may cover 20 seconds, but the picture itself is a snapshot, a second in time. You could show that in three panels, one with the penguin being picked up, one with Loretta turning, and one with the penguin being flung. Another limitation is that you can have only one important visual concept in each panel. So you need to break what happens on the page into a series of individual visual moments. Use the Rhythm Method It’s useful to start by picturing every page as being made up of the same number of panels. Panel Planning Possible layouts.

So you want to draw a webcomic Every day, thousands of new webcomics are created, and every day we are assaulted by them. I've resigned myself to the fact there is no stemming the tide of horrible new comics, so this is an effort in hopefully increasing the general quality of webcomics. In this article, we'll explore the reasons for starting a webcomic, the do's and don'ts of maintaining one, and the most common mistakes I see in new webcomic artists. Hay! Scott Kurtz is fat and rich! So, got that all clear? Still want to do your own comic? It's about a three headed dog and his adventures in the dimension of cannibals, duder. Things to avoid 1. duder, mah friends think I'm funny! 'Can I write this thing?' So many webcomics suffer from terrible, terrible writing. 1. Now go back and answer them again, because I know you just lied and said yes to all of them. If you can't write, you need to either get ahold of someone who can, or find something else to do with your time. Duder A: omg the xbox id fckuing huge NO-NOs 1.

Art Inspired / Comics, Cartooning and Graphic Novel Lesson and Unit Plans Comics in the Classroom: 100 Tips, Tools, and Resources for Teachers Gone are the days of children sneaking comics past diligent parents and teachers watching out for sub-par literature. The comics of today not only have plenty to offer, they are gaining well-deserved recognition and awards. Autobiographical Comic Strips (Taken from UIC Spiral Art Education) Ask any group of kids to make a list of words that come to mind when they hear the words comic strip and they’ll most likely come with words like funny...superhero...action comic...Sunday funnies... Comics are one of the most popular and interesting art movements of the 20th Century. Art History Goes Graphic ArtHistoryGoesGraphic.pdf Art History Goes Graphic offers a unique approach to the study of art history through the use of graphic novels. Have students create comics here.

Joey Fly Buzzes to Life: How to Make a Graphic Novel « Writing for Kids (While Raising Them) BUGS MAKE IT BIG IN GRAPHIC NOVELS…HERE’S HOW by Aaaron Reynolds & Neil Numberman (Interior. Aaron Reynolds, a writer of children’s books and graphic novels, is sitting at his writing desk. He’s typing, but suddenly stops when a shadow falls over his screen. Aaron: (looking up) Hey. Kid: Hey. Aaron: Um…writing. Kid: I’m just some random kid. Aaron: Ah. Kid: Yeah. Aaron: (turning back around) Ignore you, huh? Kid: Graphic novels? Aaron: Kinda. Kid: Whatcha writing now? Aaron: An article about how a graphic novel gets made, but I wanted to write it LIKE a graphic novel, so that’s what I’m doing. Kid: But…there’s no pictures. Aaron: Not at first. Kid: What? Aaron: Seriously. Kid: I must have the wrong house then. Aaron: I do. (Kid pauses while he thinks about this, then…) Kid: That’s messed up. Aaron: No, it’s not. Kid: You can’t make a graphic novel without being able to draw. Aaron: Well, I do. Kid: Way to work that in there. Aaron: Yeah, thanks. Kid: Just the stuff people say? Aaron: Mostly.

How to Organize and Develop Ideas for Your Novel What if you have so many ideas for your novel that the idea of an outline completely overwhelms you? It’s good writing practice to keep a notebook or paper close by so that you can jot down ideas for your story as they arise—but when the result is a growing pile of mismatched odds and ends, how do you organize those ideas into some sort of coherent outline that will guide your writing? Or, conversely, what if you have a central idea for your story, but are unsure of where to go from there? Believe it or not, I’ve found the key to getting started from both of these situations can lie in the same simple method of creating scene cards. Say you’re in the first camp, the overwhelmed-by-random-ideas one. To begin with the scene card method, you’ll start by taking out that notebook or file folder filled with little scraps of paper. Sounds simple enough, right? So, I began asking myself these questions and writing possible answers on scene cards. You might also like:

SDCC 08: SO YOU WANT TO DO A GRAPHIC NOVEL? Recognizing that many of the attendees of Comic-Con International: San Diego are there because they want to learn how to break into comics, AiT/Planet Lar set up a panel to help them do just that. A packed room of enthusiastic hopefuls spent an hour last Thursday asking questions and learning the ins and outs of the business from publisher Larry Young and a team of graphic novel creators. The panel included Marc Bernardin and Adam Freeman (Monster Attack Network, Genius, The Highwaymen), Steven Grant (Badlands, Whisper, Two Guns), Adam Beechen (Hench, The Dugout), Kirsten Baldock (Smoke and Guns), Matt Silady (The Homeless Channel) and Daniel Merlin Goodbrey (The Last Sane Cowboy & Other Stories, Necessary Monsters).

8 Basic Writing Blunders 1. Morning-routine cliché Clichés come in all shapes and sizes. There are just as many clichéd scenes as phrases and words. Compounding that cliché is having the “bleary-eyed” character drag himself from his bed, squinting against the intruding sunlight. Are you cringing? I know you want me to suggest alternatives to those hackneyed constructs, but inventing fresh ways to start a story and describe a character is your job. Mortal dread. 2. If your character gets a phone call, resist the urge to have her look up, startled, then rise, cross the room, pick up the receiver and say, “Hello?” “Hi, Mary?” “Yes.” “This is Jill.” “Hi, Jill. (Or if you’re a mystery writer): “Hi, Jill. Enough already. 3. The tinny ring echoed through the dark house. You get the idea. Late that night, Mary phoned. Give your readers credit. Even in a period piece where the baking of a cake from scratch is an engrossing trip down memory lane, the good writer gives readers credit for thinking. 4. 5. 6. A rule of thumb? 7.

Art Lesson Inspired by Japanese Manga Example comicsThick white paper for the final versionA4 white sheets office quality paperPens - Biros, Black ink pensPencils and tracing paperInkThis project will help students to develop various drawing techniques including an understanding of shading, tone, typography and story boarding techniques. It is recommended that if you are working with younger students you provide templates and plenty of opportunities to master the "style". This is a project that will progress depending on students familiarity with the comic format. Japanese comics come in various sizes, but are usually B5. In this project students will be encouraged to produce one page demonstrating the ability to integrate text, using typography and shading. Osamu Tezuka is a Japanese comic artist who created the Astro Boy character. The first stage of this project is to help students make characters. The next stage is to sketch the characters. Stage three is to write a basic story. Stage four is the draft section.