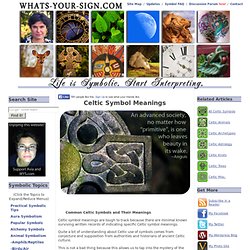 Quite a bit of understanding about Celtic use of symbols comes from conjecture and supposition from authorities and historians of ancient Celtic culture. This is not a bad thing because this allows us to tap into the mystery of the Celtic way, follow our hearts, and open up to our intuition when it comes to Celtic symbolism. Common Celtic Symbol Meanings Triskelion: A Greek term meaning "three-legged," and thus this sign looks very much like three legs running. Triquetra: Latin meaning "three-cornered. " Triple Spiral: Represents the drawing of the three powers of maiden, mother and crone. Three Rays (Arwen): The first and third rays in this symbol represent male and female energy (respectively). Five-fold: This pattern also represents balance.

Threefold: See Triple spiral. Tattoos, Tattoo Designs - Gallery and tattoo ideas for Tribal, Celtic tattoos, tattoo flash and more. Divination information. Ogham The Ogham alphabet consists of twenty letters to which a further five were added at a late stage in its development, probably later than the 8th century. 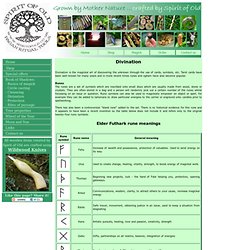 The original twenty letters each consist of from one to five straight lines or notches intersecting a stem line. The earliest surviving Ogham inscriptions are carved on standing stones with the edge of the stone forming the stem line. These stones are found mainly in Ireland, although others have been found throughout the British Isles. The script on them usually spells out the name of an individual and they are thought to be boundary markers. There is also clear evidence for the magickal and divinatory use of the Ogham alphabet from the literature of medieval Ireland. Historically the symbols were used for divination by the use of four Yew wands, possibly pentagonal in shape so an ogham symbol could be inscribed onto each side. Norse Runes. Undefined Runes Odin's sacrifice of the self brought the Runes to humankind. 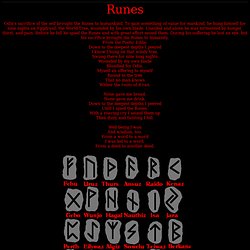 To gain something of value for mankind, he hung himself for nine nights on Yggdrasil, the World-Tree, wounded by his own blade. Unaided and alone he was tormented by hunger, thirst, and pain. Before he fell he spied the Runes and with great effort seized them. During his suffering he lost an eye, but his sacrifice brought the Runes to humanity. None gave me bread. Well-being I won And wisdom, too.

There is power in meanings of the old images and symbols. 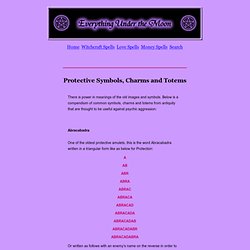 Below is a compendium of common symbols, charms and totems from antiquity that are thought to be useful against psychic aggression: One of the oldest protective amulets, this is the word Abracabadra written in a triangular form like as below for Protection: Or written as follows with an enemy’s name on the reverse in order to diminish their power. This talisman is thought to protect against injustice and evil events. Agrippa’s Pentagram A five pointed star superimposed like figure of a Male with arms and legs outstretched. Bast Bast is usually represented by the image of a black cat. Cancer The astrological symbol of Cancer, the Crab is thought to protect against astral attack. Celtic Knots.