Common symbols in mythology that produce specific meaning and imagery 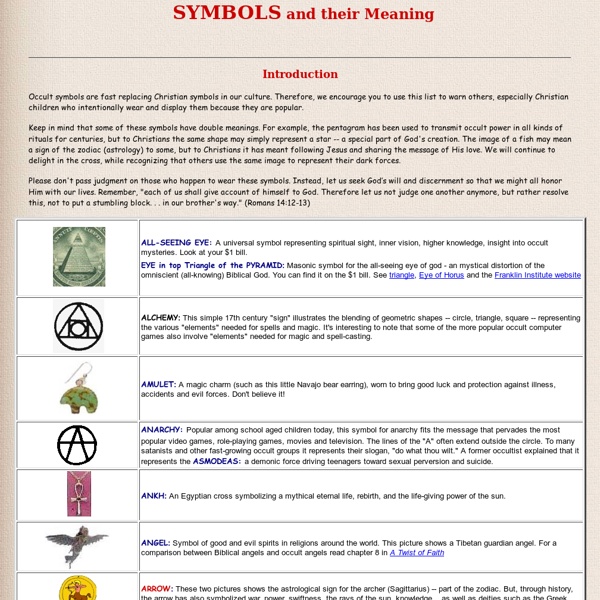 SYMBOLS and their Meaning Introduction Occult symbols are fast replacing Christian symbols in our culture. Therefore, we encourage you to use this list to warn others, especially Christian children who intentionally wear and display them because they are popular. Keep in mind that some of these symbols have double meanings. For example, the pentagram has been used to transmit occult power in all kinds of rituals for centuries, but to Christians the same shape may simply represent a star -- a special part of God's creation. The image of a fish may mean a sign of the zodiac (astrology) to some, but to Christians it has meant following Jesus and sharing the message of His love. As our nation slides back toward paganism, God’s people need to understand the increasing influence, trickery, and cruelty of the evil one – while always thanking and following our God, whose power is far greater. Learn more about symbols at: Halloween Symbols | Teletubby Symbols | Comments on symbols

Myths in words and pictures: Understanding the importance of symbols Achelous was the god of the most powerfully flowing river in Greece, and so was the chief of all the river gods. The land along the river was ruled by the king of the nearby city of Calydon. The king had a beautiful daughter named Dejanira. When it came time for Dejanira to marry, her father announced a contest: the strongest of her suitors would win her hand. Achelous, the river god, was by far the strongest in the region.

The Sabbats of Wicca Learn Wicca / Wicca 101 / Faerie Tradition Because witches honor nature, they have eight festivals, or Sabbats, that mark the year as it turns through its seasons. The following is basic information about these Sabbats, and includes both standard Wiccan information as well as my personal Sabbat lore and experiences, in other words, what I perceive the Sabbats to be. 4 Strange Cults Cult-like behavior (read, religion) is one of humankind’s oldest preoccupations. Whether centered on God, gods, aliens, or energy forces, people have always been willing to believe and subsequently sacrifice for what they believe in. Here are a few of the strangest yet on record:

America's Economic Myths - David Saied "The Olympian gods" Nicolas-André Monsiau (1754–1837) Mainstream economists and so-called experts have filled the minds of most Americans with many economic myths that are constantly reinforced by the media and repeated on the streets. These myths are erroneous at best, sometimes based on half truths. The majority of them are just false. We read and hear them every day: "inflation" is caused by rising oil prices; consumption is the most important element for economic growth; low interest rates are helpful to the economy; government expenditures help "stimulate" the economy; there is an energy "crisis," and many others. Love,Peace&LO dylanthescientist: princetanaka: just a small town girl. Living in a racist, insensitive, sexist, homophobic world, (cant take the midnight train ‘cause im fuckin scared)

Have students illustrate and discuss a scene that has meaningful imagery Inspiration Once upon a time, when you were a young child, you must have read a few popular fairy tales before. Today, we have put together a collection of digital character illustrations that are based on some very well-known fairy tales. Each interpretation of the fairy tale and its characters is a reflection of the unique style and characteristic of the illustrator who created it. From this collection, you will see the many creative ways a fairy tale and its characters can be illustrated.

The Book of Shadows Here you will find one of the largest online Book of Shadows. This page may seem a bit unorganized but I can't think of any other way to do it and I would hate to have a bunch of links for you to have to click on to get to the information you are looking for. So check back often for more items. If you would like to have a spell or information posted here, e-mail me! If you see *UPDATED* next to a section, the new information is listed first.

Clarified: Religious dietary restrictions In cooking, the process of clarification entails straining out extraneous muck from liquids so that they might be pure, clear and ideal for consumption. With this series on the world's dietary tribes, we're attempting to do the same. Future installments will explore the foodways, politics and beliefs of vegans, raw foodists, pescetarians and other culinary collectives. Today, we're delving into the dietary restrictions of twelve religions in the hopes of cooking up a little interfaith understanding.

Basic resumes - Templates <div class="cdOLblEmRed cdSearchResultsMargin">Warning: This site requires the use of scripts, which your browser does not currently allow. <a href=" how to enable scripts.</a><br/></div> How to win Rock-paper-scissors every time I admit it. When I first heard there are actual tournaments for Rock-paper-scissors, sanctioned by the World Rock Paper Scissors Society, I laughed. I mean seriously, $50k to the winner of a game that requires no skill whatsoever? Absurd. Create a storyboard illustrating the important passages that create meaning Copy This Code Snippet <a href=" src=" /></a><br><a href=" a Copy</a> | <a href=" Larger</a> Want the raw links? Large Image: Thumbnail Image:

Your Birthday, Your Tree and their meanings (wowzone.com) WOW Poetry, lyrics, music, stories, classics, Wish Only Well Find your birthday and its corresponding tree. Then, see the meaning behind it below. Do you recognize yourself? APPLE TREE (the Love) - of slight build, lots of charm, appeal, and attraction, pleasant aura, flirtatious, adventurous, sensitive, always in love, wants to love and be loved, faithful and tender partner, very generous, scientific talents, lives for today, a carefree philosopher with imagination. ASH TREE (the Ambition) - uncommonly attractive, vivacious, impulsive, demanding, does not care for criticism, ambitious, intelligent, talented, likes to play with fate, can be egotistic, very reliable and trustworthy, faithful and prudent lover, sometimes brains rule over the heart, but takes partnership very seriously.

Religion: Is God in Our Genes? It's not hard to see the divinity behind the water temples that dot the rice terraces of Bali. It's there in the white-clad high priest presiding in the temple at the summit of a dormant volcano. It's there in the 23 priests serving along with him, selected for their jobs when they were still children by a bevy of virgin priestesses. It's there in the rituals the priests perform to protect the island's water, which in turn is needed to nurture the island's rice. If the divine is easy to spot, what's harder to make out is the banal. But it's... SLCC - Learning Handouts Skip navigation links ugs : life and learning in sync Sanger Learning Center is UT Austin’s main resource for academic support.