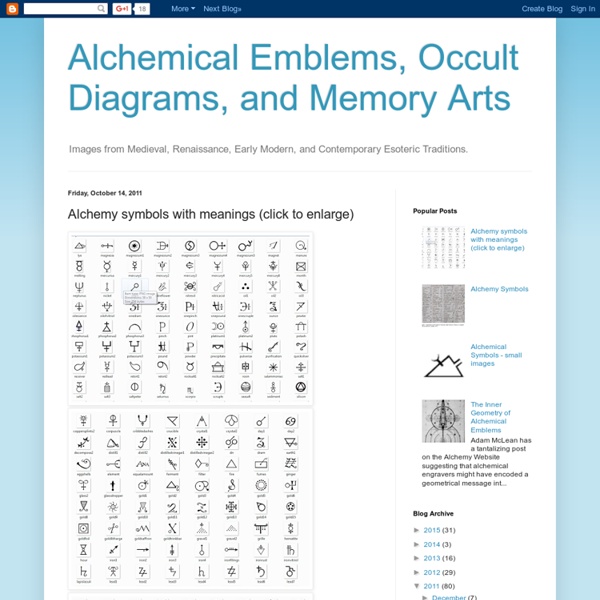 Sigillum Dei Aemeth - Sigil of Ameth By Catherine Beyer Note: Larger versions of all diagrams can be found here The Sigillum Dei Aemeth, or Seal of the Truth of God, is most widely known through the writings and artifacts of John Dee, a 16th century occultist and astrologer in the court of Elizabeth I. Sumerian cuneiform script and Sumerian language Sumerian was spoken in Sumer in southern Mesopotamia (part of modern Iraq) from perhaps the 4th millennium BC until about 2,000 BC, when it was replaced by Akkadian as a spoken language, though continued to be used in writing for religious, artistic and scholarly purposes until about the 1st century AD. Sumerian is not related to any other known language so is classified as a language isolate. Sumerian cuneiform Sumerian cuneiform is the earliest known writing system. Its origins can be traced back to about 8,000 BC and it developed from the pictographs and other symbols used to represent trade goods and livestock on clay tablets.

The research paradigm – methodology, epistemology and ontology – explained in simple language I have put together this post to explain what a research paradigm is, which includes ontology, epistemology, theoretical framework and methodology, and why it is important for your research or PhD. It took me a while to understand this properly, and below is a summary of my understanding of the topic, which I hope will help you. I suggest you go easy on yourself (I was pulling my hair out on the second day). The Pentacles of Solomon: Talismans from the Greater Key of Solomon eware of so called "pentacles" that were not cast according to the timing directions provided in the Greater Key of Solomon. While the Greater Key of Solomon is flexible about the materials used in the pentacles, the standard modern practice of simply mass producing the designs of the pentacles, without the appropriate timing and consecration, means that most pentacles for sale are without any significant magical charge and are merely pretty, yet powerless pieces of jewelry. Supreme or Grand Pentacle of Solomon The Grand or Supreme Pentacle, "...serves to convene all spirits; when shown to them they will bow and obey you." Gold plated Bronze Supreme Pentacle of Solomon is $449.95 plus shipping. Here is How to Order & More Information.

IBM Develops a New Chip That Functions Like a Brain - NYTimes.com Photo Inspired by the architecture of the brain, scientists have developed a new kind of computer chip that uses no more power than a hearing aid and may eventually excel at calculations that stump today’s supercomputers. The chip, or processor, is named TrueNorth and was developed by researchers at IBM and detailed in an article published on Thursday in the journal Science. The Pentacles of Solomon We are very pleased to announce the release of The Pentacles of Solomon by S. Aldarnay. Author and illustrator S. Aldarnay presents each of the Pentacles given in the Key of Solomon, precisely redrawn and with explanations of the divine names, the names of spirits, as well as the vesicles in English, Latin and Hebrew, in an attempt to make the individual’s use of the seals more effective. By presenting the pentacles in full the author hopes that people will be inclined to experiment more with them as the seals are able to bridge the gap between the high magic of angelic conjuration and divine names, and the folk magic which utilizes psalms and spiritual assistance for more day to day concerns. To that end, the images contained in this work are licensed under a Creative Commons Attribution-NonCommercial-NoDerivs 3.0 Unported License.

The Magical Herbalist’s Mini Guide to Popular Herbs, Plants, Fruits, Flowers & Their Magical Properties… The herbs listed below that are marked with a * next to it, should never be consumed without the correct & legal amount made & distributed by that of a qualified herbalist. They are extremely dangerous herbs, especially when used incorrectly… Let us start the list of most popular herbs alphabetically: Absinthium *A healing herb that promotes good health, vigour & an active agent to fight off disease. Acorn *Promotes good luck, encourages fertility, spiritual growth & prosperity.

Scientists discover whole new state of matter Most people are familiar with some of the common states of matter: solids, liquids and gases. Scientists also recognize a fourth state of matter — plasma — that is commonly observable here on Earth, as well as a host of other states that can only be created in the lab, such as Bose–Einstein condensates and neutron-degenerate matter. Jahn-Teller metals can now be added to this list, a state which appears to have the properties of an insulator, superconductor, metal and magnet all wrapped into one. It's the material's superconductivity which might be the most interesting trait, however. It has the potential to achieve superconductivity at a relatively high critical temperature ("high" as in -135 degrees Celsius as opposed to the sub -243.2 degrees Celsius required by many ordinary metallic superconductors), which is significant for the science of superconductivity. Related on MNN:

Beelzebub BEELZEBUB is also known as BAALZEBUB, ENLIL, BEL, "PIR BUB"* BAAL ZEBUL and BEELZEBUTHHe is also known as the Goetic Demon "BAEL" Those who are close to Beelzebub know he is Enlil. This is from him personally. Enlil was the original "Bel" which later evolved into "Baal." "Baal" means "Lord," "Master" "Baal the Prince." Beelzebub/Enlil was a very popular and well-known God who had cities named after him with the prefix "Baal" all over the Middle East.

Casting a Circle The Purposes of a Circle A sacred circle has several purposes, the most significant of which is to define an area where formal ritual work can be performed. A circle is a place in which the rules and conditions are different to that of the everyday world. A circle is not a barrier, but a doorway to another world.