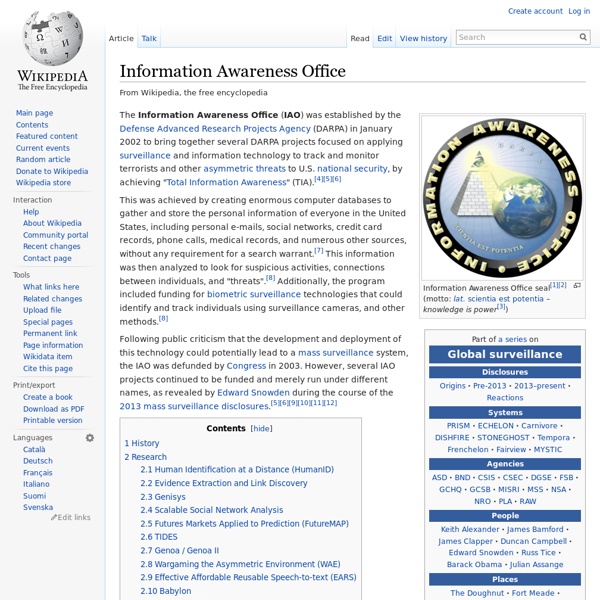 The Information Awareness Office (IAO) was established by the Defense Advanced Research Projects Agency (DARPA) in January 2002 to bring together several DARPA projects focused on applying surveillance and information technology to track and monitor terrorists and other asymmetric threats to U.S. national security, by achieving "Total Information Awareness" (TIA).[4][5][6] This was achieved by creating enormous computer databases to gather and store the personal information of everyone in the United States, including personal e-mails, social networks, credit card records, phone calls, medical records, and numerous other sources, without any requirement for a search warrant.[7] This information was then analyzed to look for suspicious activities, connections between individuals, and "threats".[8] Additionally, the program included funding for biometric surveillance technologies that could identify and track individuals using surveillance cameras, and other methods.[8] History[edit] Related:  DARPA • combat psycho (à_revoir)

DARPA reveals Avatar program, robot soldiers incoming DARPA, the bleeding-edge research wing of the United States Department of Defense, has revealed that it will spend millions of dollars on a project called “Avatar.” If you’ve seen the movie of the same name — the highest-grossing movie of all time — let me put your mind at rest: DARPA isn’t looking to genetically engineer blue-skinned aliens that humans can control; no, they’re developing robots. In the words of DARPA itself, the Avatar program will work on “interfaces and algorithms to enable a soldier to effectively partner with a semi-autonomous bipedal machine and allow it to act as the soldier’s surrogate.” If you’ve been following ExtremeTech for the last few months, you’re probably experiencing sweaty a mix of terror and excitement right now. Then there’s the interface: A joystick and multi-monitor display would probably do the job, or, if you really wanted to become one with your robotic avatar, you could use a virtual reality visor and a suit with sensors and actuators.

IAO-logo (Darpa) DARPA Program Aims to Help Counselors Spot Signs of Stress, PTSD Every day, 22 veterans commit suicide—a startling number prompting experts to probe for methods to curb the national epidemic. Officials are fielding a new program, funded by the Defense Advanced Research Projects Agency (DARPA), which can help experts assess the psychological state of troops and veterans early on and possibly get them the help needed before it’s too late. The Detection and Computational Analysis of Psychological Signals (DCAPS) program joins the growing inventory of measures to combat depression, post-traumatic stress disorder (PTSD) and suicides. It has tools to analyze facial expressions, body gestures and speech, both content and delivery, and inform experts on a user’s psychological state of mind or alert them to behavioral changes that could indicate problems. “We are now beginning to bring objective assessment to hard quantifiable data to make data-driven analysis, to come up with the indicators of distress,” explains Col. “There is no human in the loop here.

asymmetric interaction Asymmetric warfare is war between belligerents whose relative military power differs significantly, or whose strategy or tactics differ significantly. Asymmetric warfare can describe a conflict in which the resources of two belligerents differ in essence and in the struggle, interact and attempt to exploit each other's characteristic weaknesses. Such struggles often involve strategies and tactics of unconventional warfare, the weaker combatants attempting to use strategy to offset deficiencies in quantity or quality.[1] Such strategies may not necessarily be militarized.[2] This is in contrast to symmetric warfare, where two powers have similar military power and resources and rely on tactics that are similar overall, differing only in details and execution. Definition and differences[edit] The popularity of the term dates from Andrew J. R. Asymmetric conflicts include both interstate and civil wars, and over the past two hundred years have generally been won by strong actors. Iraq[edit]

Topics researched by Jack Arneson The content of the pages provided here at Pegasus was collected and written by Jack with additions by other members of Pegasus to provide corroborating evidence as well as new pertinent data. All Jack's original work, including some pages not on Pegasus yet, can be found at his website... Visit Jack's Website Welcome To The Moon Page Resume brief: 1967-70 Army... Petroleum Storage industrial mechanics...Training in industrial handling and mechanics of fuel storage and it's equipment.Including on and off-loading of tankers. I didn't do it to get out of it, I wanted to put my skills to better use to help the effort. I met other photographers in the AF and went to their labs on official invites and saw some astounding things. 1970-77... acquired employment with government contractors involved with mining operations overseas... Most of my work consisted of maintaining industrial machines and equipment. I was injured on the job in 2001 and don't do that kind of work any more. - Jack

DARPA's Top 3 Predictions For The Future By Kevin Samson When it comes to predictions, perhaps no organization on the planet is better able to make dreams a reality than the Defense Advanced Research Projects Agency (DARPA). Their “mad science” reputation already has given the world humanoid robots, drones, and the world’s most advanced surveillance systems. But they are telling us that there is much more to come. Interestingly, the timeline given by DARPA’s “Forward to the Future” video messages, seen below, is 2045 – the theorized date of The Singularity popularized by futurist Ray Kurzweil in his 2006 book The Singularity is Near: When Humans Transcend Biology. With yearly (known) funding in the tens of billions of dollars, DARPA also receives untold funding for “black budget” secret projects not even subjected to presidential and congressional oversight. 1 – Human-Machine Interface This broad category includes new ways to communicate with the machines around us, even through emotions. 2 – Mind Control 3 – Nanotech Materials

language wars Nature or nurture. Love it or leave it. If it doesn’t fit, you must acquit. If you didn’t already know that euphonious dichotomies are usually phony dichotomies, you need only check out the latest round in the supposed clash between “prescriptivist” and “descriptivist” theories of language. According to the sadly standard dichotomy, prescriptivists believe that certain usages are inherently correct and others inherently incorrect, and that to promote correct forms is to uphold truth, morality, excellence, and a respect for the best of our civilization. Descriptivists, according to this scheme, believe that norms of correctness are arbitrary shibboleths of the ruling class, designed to keep the masses in their place. These antagonists, to be sure, are not made entirely out of straw. The thoughtful, nondichotomous position on language depends on a simple insight: Rules of proper usage are tacit conventions. The conventions of written prose represent a similar kind of standardization.

Data Storage In Crystal Quartz Will Change Everything! Source: www.thespiritscience.net | Original Post Date: February 13, 2014 – You know how much I LOVE talking about new technology, right? Well, this is one that is going to blow your mind, make an excellent case for the Crystal Movement, and also mop the floor with “limited data storage” forever! There’s a new kind of storage device which many tech companies have been diving into in secret for the past few years, which Hitachi recently came out with a technology they are developing which is essentially a sheet of Quartz Glass, which could potentially save data up to 300 Million Years! If you didn’t know anything about storage devices that we currently have, but anything from records, CD’s, USB sticks, magnetic tape, none of these can even lay a finger on this new, very impressive technology. “The prototype is made of a square of quartz two centimeters wide and two millimeters thick. Now, while this is exciting, there’s more to it than just that. The Crystal Skulls References: