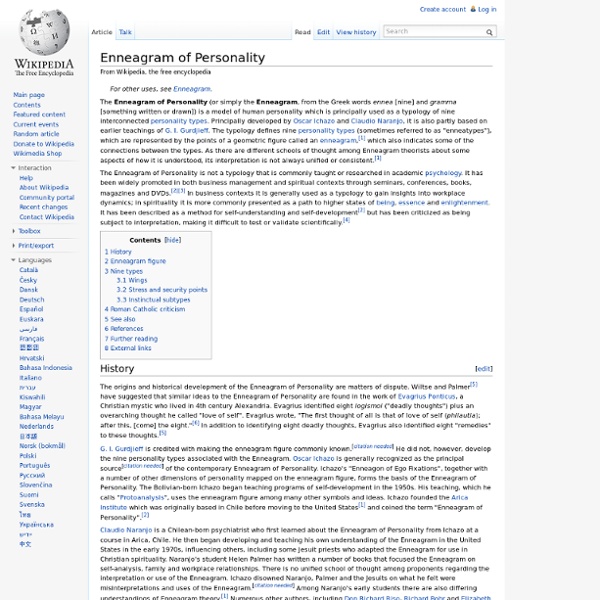 Seven virtues History[edit] The first virtues were identified by the Greek philosophers Aristotle and Plato, who regarded temperance, wisdom, justice, and courage as the four most desirable character traits. After the New Testament was written, these four virtues became known as the cardinal virtues, while faith, hope and charity were referred to as the theological virtues. But Stalker, in his book The Seven Cardinal Virtues, says, "It is of distinct advantage to be reminded that the Christian character has a natural foundation... but certainly the latter are cardinal also--that is, hinge virtues; and it is convenient to have a single adjective for designating the whole seven".[1] Seven heavenly virtues[edit] A list of the seven heavenly virtues - to oppose the seven deadly sins - appeared later, in an epic poem entitled Psychomachia, or Battle/Contest of the Soul. Popular culture[edit] See also[edit] References[edit] External links[edit]

Personality type This article is about the generic aspects of type theory. For the book by Jung, see Psychological Types. Clinically effective personality typologies[edit] Effective personality typologies reveal and increase knowledge and understanding of individuals, as opposed to diminishing knowledge and understanding as occurs in the case of stereotyping. Effective typologies also allow for increased ability to predict clinically relevant information about people and to develop effective treatment strategies.[2] There is an extensive literature on the topic of classifying the various types of human temperament and an equally extensive literature on personality traits or domains. Types vs. traits[edit] The term type has not been used consistently in psychology and has become the source of some confusion. Type theories[edit] Carl Jung[edit] One of the more influential ideas originated in the theoretical work of Carl Jung as published in the book Psychological Types. Four functions of consciousness[edit]

Portrait of an INTJ As an INTJ, your primary mode of living is focused internally, where you take things in primarily via your intuition. Your secondary mode is external, where you deal with things rationally and logically. INTJs live in the world of ideas and strategic planning. With Introverted Intuition dominating their personality, INTJs focus their energy on observing the world, and generating ideas and possibilities. INTJ's tremendous value and need for systems and organization, combined with their natural insightfulness, makes them excellent scientists. INTJs are natural leaders, although they usually choose to remain in the background until they see a real need to take over the lead. INTJs spend a lot of time inside their own minds, and may have little interest in the other people's thoughts or feelings. The INTJ's interest in dealing with the world is to make decisions, express judgments, and put everything that they encounter into an understandable and rational system.

Rights Rights are legal, social, or ethical principles of freedom or entitlement; that is, rights are the fundamental normative rules about what is allowed of people or owed to people, according to some legal system, social convention, or ethical theory.[1] Rights are of essential importance in such disciplines as law and ethics, especially theories of justice and deontology. Rights are often considered fundamental to civilization, being regarded as established pillars of society and culture,[2] and the history of social conflicts can be found in the history of each right and its development. According to the Stanford Encyclopedia of Philosophy, "rights structure the form of governments, the content of laws, and the shape of morality as it is currently perceived. Definitional issues[edit] There is considerable disagreement about what is meant precisely by the term rights. One way to get an idea of the multiple understandings and senses of the term is to consider different ways it is used.

Five Lessons From a Temporary Phone-Sex Operator Oct 11, 2012 7:00am (Image Credit: ABC News) By Mélanie Berliet Mélanie Berliet, a self-described “immersive journalist,” researched the phone-sex industry by actually joining it. Check out the lessons she learned below. 1. This was misguided on many levels. 2. Since I wasn’t actually going to perform sex acts on callers, I questioned the usefulness of this tip. 3. 4. WATCH: Inside the World of a Mom-Turned Phone-Sex Operator It’s especially advantageous to prod a client about likes and dislikes as early as possible. 5. Generally, I felt protected by the network of fiber-optic cables separating me from those who rang. INTP personality Learn from yesterday, live for today, hope for tomorrow. The important thing is not to stop questioning. The Logician personality type is fairly rare, making up only three percent of the population, which is definitely a good thing for them, as there’s nothing they’d be more unhappy about than being “common”. Logicians pride themselves on their inventiveness and creativity, their unique perspective and vigorous intellect. The Unexamined Life Is Not Worth Living Logicians are known for their brilliant theories and unrelenting logic – in fact, they are considered the most logically precise of all the personality types. They love patterns, and spotting discrepancies between statements could almost be described as a hobby, making it a bad idea to lie to a Logician. Wisdom Begins in Wonder They may appear to drift about in an unending daydream, but Logicians’ thought process is unceasing, and their minds buzz with ideas from the moment they wake up.

The Light Project United States Constitution The Constitution was adopted on September 17, 1787, by the Constitutional Convention in Philadelphia, Pennsylvania, and ratified by conventions in eleven States. It went into effect on March 4, 1789.[2] Since the Constitution was adopted, it has been amended twenty-seven times. The first ten amendments (along with two others that were not ratified at the time) were proposed by Congress on September 25, 1789, and were ratified by the necessary three-fourths of the States on December 15, 1791.[3] These first ten amendments are known as the Bill of Rights. The Constitution is interpreted, supplemented, and implemented by a large body of constitutional law. History First government The Articles of Confederation and Perpetual Union was the first constitution of the United States of America.[6] It was drafted by the Continental Congress in mid-1776 to late 1777, and formal ratification by all 13 states was completed in early 1781. Congress was paralyzed. Constitutional Convention Ratification