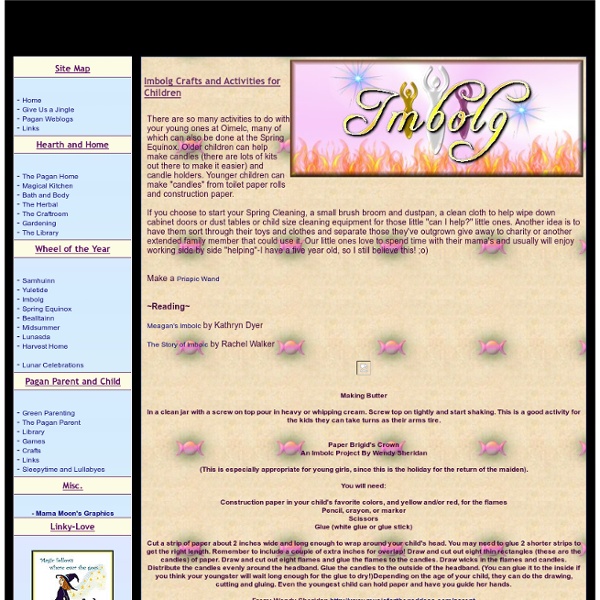 Imbolg Crafts and Activities for Children There are so many activities to do with your young ones at Oimelc, many of which can also be done at the Spring Equinox. Older children can help make candles (there are lots of kits out there to make it easier) and candle holders. Younger children can make "candles" from toilet paper rolls and construction paper. If you choose to start your Spring Cleaning, a small brush broom and dustpan, a clean cloth to help wipe down cabinet doors or dust tables or child size cleaning equipment for those little "can I help?" little ones. Make a Priapic Wand ~Reading~ Meagan's Imbolc by Kathryn Dyer The Story of Imbolc by Rachel Walker Making Butter In a clean jar with a screw on top pour in heavy or whipping cream. Paper Brigid's Crown An Imbolc Project By Wendy Sheridan (This is especially appropriate for young girls, since this is the holiday for the return of the maiden). You will need: From: Wendy Sheridan Source:unknown Related:  Esotericism • hedge witch • Magickal

Outstanding Article on The Healing of Crystals!!! HJ: The minerals that makeup crystals are literally stardust transformed over timescales unimaginable to the human mind. As such, they have some pretty remarkable healing properties. There are literally thousands of different varieties, each with their own effects and unique makeup. Judy Hall is one of the world’s foremost experts on crystals and presents a wonderfully detailed and complete guide below how to use them for healing your mind, body and spirit. - Truth THE FRUITS OF THE EARTH: An introduction to crystal healing Excerpted from Earth Blessings: Using Crystals for Personal Energy Clearing, Earth Healing & Environmental Enhancement by Judy Hall, a past-life therapist and karmic astrologer with more than 40 years of experience. Crystals and the rocks that enfold them are reborn star matter, created and recreated by a variety of processes, each of which affects how energy is able to flow. Igneous rocks Many potent healing crystals are a result of igneous processes. Sedimentary rocks

Nine Herbs Charm The Nine Herbs Charm is an Old English charm recorded in the 10th-century[1] Lacnunga manuscript.[2] The charm is intended for the treatment of poisoning and infection by a preparation of nine herbs. The numbers nine and three, significant in Germanic paganism and later Germanic folklore, are mentioned frequently within the charm.[2] The poem contains references to Christian and English Pagan elements, including a mention of the major Germanic god Woden. According to R. K. Gordon, the poem is "clearly an old heathen thing which has been subjected to Christian censorship. Poem contents[edit] Herbs[edit] The charm references nine herbs: Mucgwyrt (Mugwort)Attorlaðe (identified as Cockspur Grass by R. At the end of the charm, prose instructions are given to take the above-mentioned herbs, crush them to dust, and to mix them with old soap and apple juice. Woden[edit] A snake came crawling, it bit a man. See also[edit] Notes[edit] References[edit] External links[edit]

Beltane: A Pagan Point of View Three AROMATHERAPY OIL BLENDS for Beltane from WILLOW Bone Mother Readings from Find them Here.or visit Willow's Angela Jeffreys. Aromatherapy Page HERE Here. Beltane! It is Beltane! Discover the magic of the ancient festival of Beltane - Maypoles, Sacred Union, Bel-fires and fertility - celebrate the Rites of Spring The meaning of Beltane is bel-fire and one of the nine sacred woods used within those flames is the mighty oak. Also known as May Eve, May Day, and Walpurgis Night, happens at the beginning of May. Prepare a May basket by filling it with flowers and goodwill and then give it to someone in need of healing and caring, such as a shut-in or elderly friend. Going A-Maying & Bringing in the May - Merry-making and Nature communion. * Midpoint between Spring Equinox and Summer Solstice. * In Pagan Rome, Floralia, from April 27-May 3 was the festival of the Flower Goddess Flora and the flowering of springtime. ... ... ... ... ... Collected By Willow

Witchcraft in the Victorian Age Witchcraft in the Victorian Age Written By Staff Contributor: Elizabeth Marie Clements The Victorian Era has been associated with Witchcraft in American Hollywood and literature in many different mediums over the years. The settings for the popular show Charmed and the movie Practical Magic were Victorian houses. Literary fiction uses Victorian settings for tales of magic and sorcery frequently, and it is true that there were important Witchcraft texts published in the 1880s and 90s. The history of Witchcraft can be confusing at times, largely due to a lack of reputable resources. The era itself is commonly thought of as lasting between 1837 and 1901, during the reign of Queen Victoria of England. The concept of “the will” and personal destiny was brought to the public in an accessible way. Fortune-telling became fashionable as a parlour game as well as a form of rebellion against the “unfashionable” and outdated, unmodern and unscientific Christianity. Bibliography 1.

Dao De Jing Daripada Wikibooks. 31 Weapons are the bearers of bad news; all people should detest them. The wise man values the left side, and in time of war he values the right. Weapons are meant for destruction, and thus are avoided by the wise. Only as a last resort will a wise person use a deadly weapon. If peace is her true objective how can she rejoice in the victory of war? 32 The Tao is nameless and unchanging. If a ruler abides by its principles, then her people will willingly follow. Naming is a necessity for order, but naming can not order all things. All things end in the Tao just as the small streams and the largest rivers flow through valleys to the sea. 33 Those who know others are intelligent; those who know themselves are truly wise. Those who know they have enough are truly wealthy. Those who persist will reach their goal. Those who keep their course have a strong will. 34 The great Tao flows unobstructed in every direction. The soft and pliable overcomes the hard and inflexible.