The helical model - our solar system is a vortex 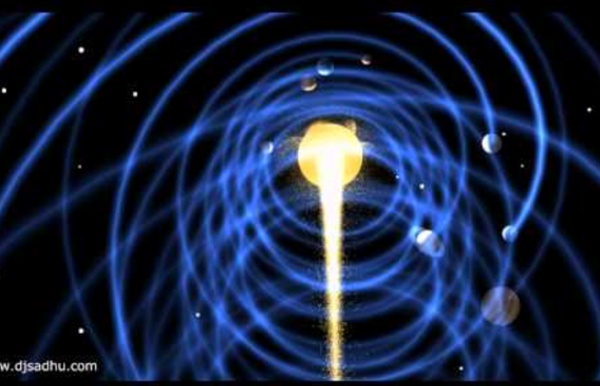 ESO Release Incredible View Of The Cat’s Paw Nebula Find the biggest screen you can, because this image deserves to be seen in its full 2-billion-pixel glory. The image was released by the European Southern Observatory (ESO) and captures in incredible detail NGC 6334 and NGC 6357, known as the Cat’s Paw and Lobster Nebula. The image is 49,511 x 39,136 pixels and it’s one of the largest images ever released by ESO. A zoomable version is available. Cell Models For life all cells have basic needs. Cells have diverged in their structure and function to accommodate these survival requirements. Here are some KEY TERMS to help you think, explore and search for similarities and significant differences that have become the characteristics of eukaryote (animal, plant) and prokaryotic (bacteria) cells.

Art vs. Science, Part Four: Gas giants scare the crap out of me – bioephemera Okay, I knew that planets are big, intellectually, but a well-done graphic is worth a thousand words, and a pretty HD video is even better. Brad Goodspeed made this video to suggest what other planets would look like, if they orbited Earth at the same distance as the Moon does. I’ve embedded it, but you should seriously watch it in HD, full-screen for maximum effect. Scale from Brad Goodspeed on Vimeo. I have nightmares like that. Red Square Nebula Not to be confused with a similar nebula, the Red Rectangle Nebula. The Red Square Nebula is a celestial object located in the area of the sky occupied by star MWC 922 in the constellation Serpens. The first images of this bipolar nebula, taken using the Mt. Palomar Hale telescope in California, were released in April 2007.

209 Seconds That Will Make You Question Your ENTIRE Existence! I'm Speechless. Spread It! The scale of the universe is almost beyond our imagination. The universe keeps expanding (at 42.5 miles per second per megaparsec), and we constantly form new hypotheses about how it was created and what will happen next. Our farthest space probe from Earth, the Voyager 1, is traveling a million miles a day, and after nearly 40 years, has barely left our solar system. Fallen Angel Names: Names of Fallen Angels The following list is of traditional fallen angel names gathered from different religions, mythologies and lore. These angel names are of those angels considered to be of a bad nature and not names of good angels. Fallen angel names find their roots within ancient cultures, such as Babylon, Assyria, and Egypt, as well as within Jewish, Christian and Muslim lore. Over thousands of years, angel names have evolved in spelling, meaning and use within religions, mysticism and magic, where the name of an angel is thought important in order to invoke angelic help. Some rituals are said to invoke good angels, while other rituals are performed to attempt to invoke fallen angels. Many good angel names include a suffix word meaning of God (-el), or yah, which means Lord.

What we learn just by being here “Everyone carries a piece of the puzzle. Nobody comes into your life by mere coincidence. Trust your instincts. Do the unexpected. Find the others.” -Timothy Leary New Study Challenges Planck Results cosmic microwave backgroundA new view of the cosmic microwave background, as seen over the whole sky with the Planck satellite. Although analyses of this image indicate complete agreement with the simple model of a big bang inflation, a new paper suggests the agreement is so perfect that it is very unlikely the inflation model is actually the correct one. Credit: ESA/Planck A new study from researchers at the Harvard-Smithsonian Center for Astrophysics challenges the inflation model, arguing that the new Planck results are actually too good. The universe was created about fourteen billion years ago in a blaze of light known as the big bang. After about 380,000 years or so, once matter had cooled enough for neutral atoms (mostly hydrogen atoms) to form, light was able to travel through space relatively freely.

Is the Universe a Giant living organism? It certainly is possible that life could exist on a larger scale, perhaps on a “cosmic level”. What makes us different from stones? Some scientists have thought about what “life really means” and there are some that believe that life is a bigger deal than previously thought. Is it possible that the entire cosmos is a single living organism, in which we live and move?

Eternal inflation Eternal inflation is predicted by many different models of cosmic inflation. MIT professor Alan H. Guth proposed an inflation model involving a "false vacuum" phase with positive vacuum energy. Parts of the Universe in that phase inflate, and only occasionally decay to lower-energy, non-inflating phases or the ground state. In chaotic inflation, proposed by physicist Andrei Linde, the peaks in the evolution of a scalar field (determining the energy of the vacuum) correspond to regions of rapid inflation which dominate.