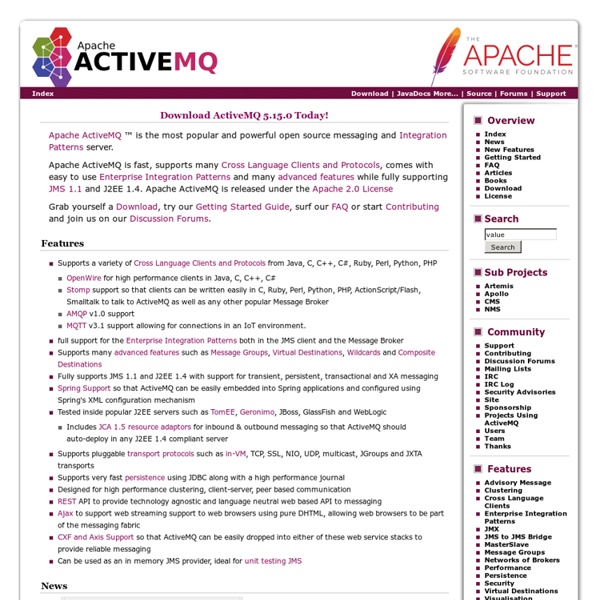 RabbitMQ - Messaging that just works A quick message queue benchmark: ActiveMQ, RabbitMQ, HornetQ, QPID, Apollo... - Muriel's Tech Blog Lately I performed a message queue benchmark, comparing several queuing frameworks (RabbitMQ, ActiveMQ…). Those benchmarks are part of a complete study conducted by Adina Mihailescu, and everything was presented at the April 2013 riviera.rb meet-up. You should definitely peek into Adina’s great presentation available online right here. So I wanted to benchmark brokers, using different protocols: I decided to build a little Rails application piloting a binary that was able to enqueue/dequeue items taken from a MySQL database. I considered the following scenarios: Scenario A: Enqueuing 20,000 messages of 1024 bytes each, then dequeuing them afterwards.Scenario B: Enqueuing and dequeuing simultaneously 20,000 messages of 1024 bytes each.Scenario C: Enqueuing and dequeuing simultaneously 200,000 messages of 32 bytes each.Scenario D: Enqueuing and dequeuing simultaneously 200 messages of 32768 bytes each. I decided to bench the following brokers: Scenario A Scenario B Scenario C Scenario D

Redis Petals ESB, the Open Source ESB for large SOA infrastructures Difference Between Grid Computing and Distributed Computing Definition of Distributed Computing Distributed Computing is an environment in which a group of independent and geographically dispersed computer systems take part to solve a complex problem, each by solving a part of solution and then combining the result from all computers. These systems are loosely coupled systems coordinately working for a common goal. A computing system in which services are provided by a pool of computers collaborating over a network .A computing environment that may involve computers of differing architectures and data representation formats that share data and system resources. Definition of Grid Computing The Basic idea between Grid Computing is to utilize the ideal CPU cycles and storage of million of computer systems across a worldwide network function as a flexible, pervasive, and inexpensive accessible pool that could be harnessed by anyone who needs it, similar to the way power companies and their users share the electrical grid. Grid Computing Vs. 1. 2.