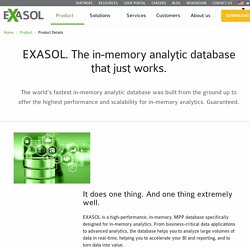 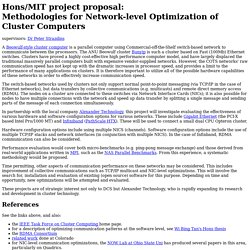 The ANU Beowulf cluster Bunyip is such a cluster based on Fast (100Mb) Ethernet switches. Clusters have proved a highly cost-effective high performance computer model, and have largely displaced the traditional massively parallel computers built with expensive vendor-supplied networks. However, the COTS networks' raw communication speed has not kept up with the dramatic increases in processor speed, and provides a limit to the performance of many applications on clusters. It is therefore important to utilize all of the possible hardware capabilities of these networks in order to effectively increase communication speed. Hardware configuration options include using multiple NICS (channels). 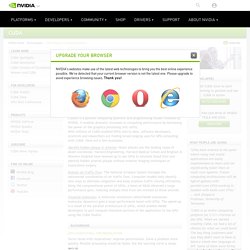 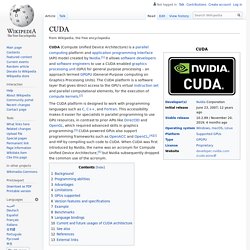 The CUDA platform is a software layer that gives direct access to the GPU's virtual instruction set and parallel computational elements, for the execution of compute kernels.[2] Background[edit] The graphics processing unit (GPU), as a specialized computer processor, addresses the demands of real-time high-resolution 3D graphics compute-intensive tasks. By 2012, GPUs had evolved into highly parallel multi-core systems allowing very efficient manipulation of large blocks of data. ParallelProcessing. A number of Python-related libraries exist for the programming of solutions either employing multiple CPUs or multicore CPUs in a symmetric multiprocessing (SMP) or shared memory environment, or potentially huge numbers of computers in a cluster or grid environment. 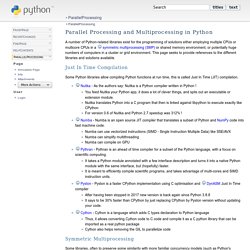 This page seeks to provide references to the different libraries and solutions available. Symmetric Multiprocessing Some libraries, often to preserve some similarity with more familiar concurrency models (such as Python's threading API), employ parallel processing techniques which limit their relevance to SMP-based hardware, mostly due to the usage of process creation functions such as the UNIX fork system call. However, a technique called process migration may permit such libraries to be useful in certain kinds of computational clusters as well, notably single-system image cluster solutions (Kerrighed, OpenSSI, OpenMosix being examples).