Mygpu. Visualizing MNIST: An Exploration of Dimensionality Reduction - colah's blog. At some fundamental level, no one understands machine learning. 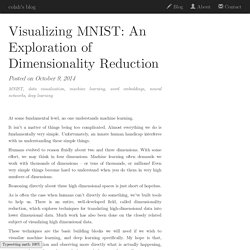 It isn’t a matter of things being too complicated. Almost everything we do is fundamentally very simple. Unfortunately, an innate human handicap interferes with us understanding these simple things. Humans evolved to reason fluidly about two and three dimensions. With some effort, we may think in four dimensions. Reasoning directly about these high dimensional spaces is just short of hopeless. As is often the case when humans can’t directly do something, we’ve built tools to help us. These techniques are the basic building blocks we will need if we wish to visualize machine learning, and deep learning specifically. And so, the first thing on our agenda is to familiarize ourselves with dimensionality reduction. MNIST For ML Beginners. Google Cuts Its Giant Electricity Bill With DeepMind-Powered AI.

Google just paid for part of its acquisition of DeepMind in a surprising way. 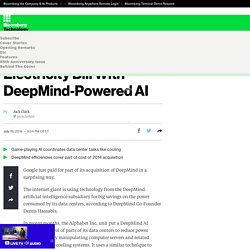 The internet giant is using technology from the DeepMind artificial intelligence subsidiary for big savings on the power consumed by its data centers, according to DeepMind Co-Founder Demis Hassabis. In recent months, the Alphabet Inc. unit put a DeepMind AI system in control of parts of its data centers to reduce power consumption by manipulating computer servers and related equipment like cooling systems. It uses a similar technique to DeepMind software that taught itself to play Atari video games, Hassabis said in an interview at a recent AI conference in New York.

The system cut power usage in the data centers by several percentage points, "which is a huge saving in terms of cost but, also, great for the environment," he said. The savings translate into a 15 percent improvement in power usage efficiency, or PUE, Google said in a statement. Machine Learning Tech Page. Detecting cats in images with OpenCV. Did you know that OpenCV can detect cat faces in images…right out-of-the-box with no extras? 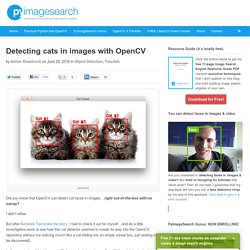 I didn’t either. But after Kendrick Tan broke the story, I had to check it out for myself…and do a little investigative work to see how this cat detector seemed to sneak its way into the OpenCV repository without me noticing (much like a cat sliding into an empty cereal box, just waiting to be discovered). In the remainder of this blog post, I’ll demonstrate how to use OpenCV’s cat detector to detect cat faces in images. This same technique can be applied to video streams as well. Detecting cats in images with OpenCV If you take a look at the OpenCV repository, specifically within the haarcascades directory (where OpenCV stores all its pre-trained Haar classifiers to detect various objects, body parts, etc.), you’ll notice two files: Présentation "DEA Perception et Traitement de l’Information Reconnaissance des formes Apprentissage linéaire S. Canu. Google Cloud Platform Blog: Google supercharges machine learning tasks with TPU custom chip. Posted by Norm Jouppi, Distinguished Hardware Engineer, Google Machine learning provides the underlying oomph to many of Google’s most-loved applications. 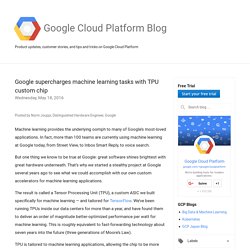 In fact, more than 100 teams are currently using machine learning at Google today, from Street View, to Inbox Smart Reply, to voice search. But one thing we know to be true at Google: great software shines brightest with great hardware underneath. That’s why we started a stealthy project at Google several years ago to see what we could accomplish with our own custom accelerators for machine learning applications.

The result is called a Tensor Processing Unit (TPU), a custom ASIC we built specifically for machine learning — and tailored for TensorFlow. We’ve been running TPUs inside our data centers for more than a year, and have found them to deliver an order of magnitude better-optimized performance per watt for machine learning. Visualizing MNIST: An Exploration of Dimensionality Reduction - colah's blog. Learning Representations: A Challenge for Learning Theory. Perceptual tasks such as vision and audition require the construction of good features, or good internal representations of the input. 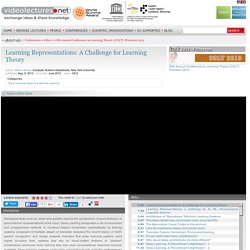 Monty Hall problem. In search of a new car, the player picks a door, say 1. 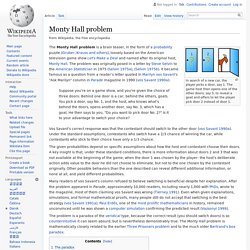 The game host then opens one of the other doors, say 3, to reveal a goat and offers to let the player pick door 2 instead of door 1. Suppose you're on a game show, and you're given the choice of three doors: Behind one door is a car; behind the others, goats. You pick a door, say No. 1, and the host, who knows what's behind the doors, opens another door, say No. 3, which has a goat. He then says to you, "Do you want to pick door No. 2? " Is it to your advantage to switch your choice? Vos Savant's correct response was that the contestant should switch to the other door (vos Savant 1990a). The given probabilities depend on specific assumptions about how the host and contestant choose their doors. An Overview of Compressed Sensing and Sparse Signal Recovery via L1 Minimization.

In many applications, one often has fewer equations than unknowns. 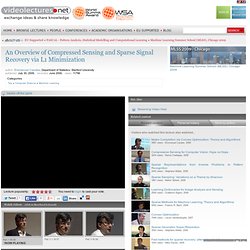 While this seems hopeless, the premise that the object we wish to recover is sparse or nearly sparse radically changes the problem, making the search for solutions feasible. This lecture will introduce sparsity as a key modeling tool together with a series of little miracles touching on many areas of data processing. These examples show that finding *that* solution to an underdetermined system of linear equations with minimum L1 norm, often returns the ''right'' answer. Further, there is by now a well-established body of work going by the name of compressed sensing, which asserts that one can exploit sparsity or compressibility when acquiring signals of general interest, and that one can design nonadaptive sampling techniques that condense the information in a compressible signal into a small amount of data - in fewer data points than were thought necessary.

Undocumented Matlab. I would like to welcome Chris Parmer of plot.ly, who will describe the integration of Plotly graphs and charts in Matlab. 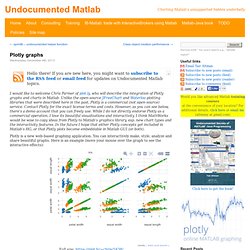 Unlike the open-source JFreeChart and Waterloo plotting libraries that were described here in the past, Plotly is a commercial (not open-source) service. Contact Plotly for the exact license terms and costs. However, as you can see below, there’s a demo account that you can freely use. While I do not directly endorse Plotly as a commercial operation, I love its beautiful visualizations and interactivity. I think MathWorks would be wise to copy ideas from Plotly to Matlab’s graphics library, esp. new chart types and the interactivity features. SciKits - scikits. Github/herrfz/dataanalysis/blob/master/week4/clustering_example. CORE. This page documents the CORE API methods and API response codes. Plan.geomatics.ucalgary.ca/papers/20376_saeeddaneshmand_apr13.pdf. Www.analog.com/static/imported-files/tech_articles/480501640radio101.pdf. Newport.eecs.uci.edu/~syed/papers/syed_thesis.pdf. Www3.nd.edu/~jnl/ee80653/tutorials/farzad.pdf. FPO IP Research & Communities. 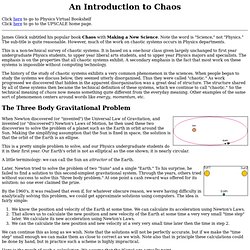 James Gleick subtitled his popular book Chaos with Making a New Science. Note the word is "Science," not "Physics. " The sub-title is quite reasonable. However, much of the work on chaotic systems occurs in Physics departments. This is a non-technical survey of chaotic systems. The history of the study of chaotic systems exhibits a very common phenomenon in the sciences. The Three Body Gravitational Problem When Newton discovered (or "invented") the Universal Law of Gravitation, and invented (or "discovered") Newton's Laws of Motion, he then used these two discoveries to solve the problem of a planet such as the Earth in orbit around the Sun.

This is a pretty simple problem to solve, and our Physics undergraduate students do it in their first year. A little terminology: we can call the Sun an attractor of the Earth. Later, Newton tried to solve the problem of two "Suns" and a single "Earth. " MIMO Radar: Demystified.