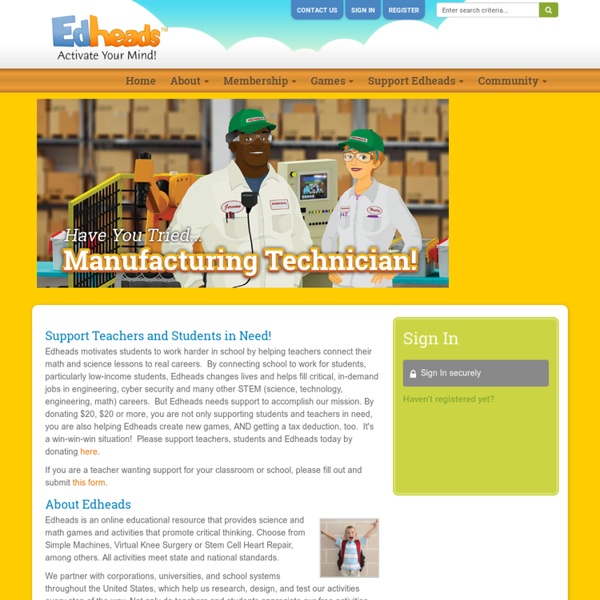 Edheads is an online educational resource that provides free science and math games and activities that promote critical thinking. Choose from Simple Machines, Virtual Knee Surgery or Stem Cell Heart Repair, among others. All activities meet state and national standards. We partner with corporations, universities, and school systems throughout the United States, which help us research, design, and test our activities every step of the way. Not only do teachers and students appreciate our free activities, Edheads has been recognized by almost every major award on the Web for our excellent educational content. So click the "Choose an Activity" tab at the top of the page to dive into an activity and let the fun and learning begin!

Newton's 3 Laws of Motion Problem: Does height of a ramp affect the distance a hot wheels car will travel? Hypothesis: I think that ... because ... Materials: one meter ramp hot wheels car meter stick 4 science books science journal and pencil Procedure: Build the ramp one science book high. Place the hot wheels car at the starting point and release.

Roller Coaster Game Welcome to the death defying Funderstanding Roller Coaster! This simulator is designed for people who want to design their own thrilling coaster and educators who want to use a cool activity to simulate the application of physics by using an exciting interactive tool and access to a wonderful reference source. It is your mission to become a roller coaster designer so that you can achieve maximum thrills and chills without crashing or flying off the track (unless that’s how you like your coaster to work!). If you accept this mission you must decide on a number of factors.

The Field Book Project What is a field book? Field books or field notes are primary source documents that describe the events leading up to and including the collection of specimens or observations during field research. Field notes can take many forms depending on the information needs of the collector. Importance and challenges of field books Field notes are significant sources of information related to scientific discovery. They provide rich data for researchers to understand how biodiversity has changed over time and space.

Numbers Index Number Skills are very valuable. Counting ... How to do add, subtract, multiply and divide ... More about add, subtract, multiply and divide ... How to work with Decimals ... Air Resistance > Experiment #13 from Physics with Vernier Recommended for High School. Loaded: 0% Progress: 0% Introduction Galileo Drops the Ball - Virtual Experiment In around 1590 Galileo Galilei (1564-1642) climbed up the Leaning Tower of Pisa and dropped some balls to the ground. Two balls of different masses, but of similar shape and density that were released together hit the ground at the same time. Until then it was commonly believed that heavy things fall faster than light things. Many people still believe this, and casual observation of everyday phenomena often does tend to confirm this view. If you drop a brick and a feather at the same time the brick will probably hit the ground first. But this is because of differences in the amount of friction between these objects and the air around them, not because their masses are different.

125 Great Science Videos: From Astronomy to Physics & Psychology Astronomy & Space Travel A Brief, Wondrous Tour of Earth (From Outer Space) – Video – Recorded from August to October, 2011 at the International Space Station, this HD footage offers a brilliant tour of our planet and stunning views of the aurora borealis.A Universe from Nothing – Video – In 53 minutes, theoretical physicist Lawrence Krauss answers some big enchilada questions, including how the universe came from nothing.A Year of the Moon in 2.5 Minutes – Video – The Lunar Reconnaissance Orbiter has been orbiting the moon for over a year. The footage gets compressed into 2 slick minutes.A Day on Earth (as Seen From Space) – Video – Astronaut Don Pettit trained his camera on planet Earth, took a photo once every 15 seconds, and then created a brilliant time-lapse film.Atlantis’s Final Landing at Kennedy Space Center – Video – After more than 30 years, the space shuttle era comes to a close. Video runs 30 minutes.

Comic Life 3 for Mac & Windows Presenting Comic Life 3, the app with everything you need to make a stunning comic from your own images. Packed with fonts, templates, panels, balloons, captions, and lettering art, Comic Life is a fun, powerful and easy-to-use app with endless possibilities. Whether it is photos of friends or hand drawn comic characters, Comic Life is the ultimate app for turning your images into a comic. Want to recount your holiday adventures or tell a life-story in an engaging style? Force and Motion Facts Motion makes the world go 'round. Motion makes the moon go 'round too. In fact, motion makes lots of things go.

Mars Exploration Program: Mars for Educators You can participate in four major programs: Curriculum Supplements Robotics activities are available. Download the activity summaries (PDF, 1.33 MB) or the full activity set (PDF, 1.08 MB). The Mars Curriculum Modules are designed to help bring the topic of Mars into your 4th through 12th grade classrooms. CLASSROOM - Splashtop Inc. Splashtop Classroom allows teachers to share their desktop and applications. Once connected, students can view, control and annotate over lesson content directly from their own devices. Splashtop Classroom is perfect for teachers and instructors who want to engage the entire room! Teach from all four corners of the classroom Connect to the class PC/Mac from your mobile device Get out from behind your desk and improve classroom management and student attention Sit next to students while still keeping the class on task Turn your mobile device into an interactive whiteboard

A Plasma Ball! What is it and How Does it Work? Grade Level: 6th - 9th; Type: Physics To determine what a plasma ball is and how it works. What is plasma? Motion: Forces Forces are a big part of physics. Physicists devote a lot of time to the study of forces that are found everywhere in the universe. The forces could be big, such as the pull of a star on a planet. The forces could also be very small, such as the pull of a nucleus on an electron.