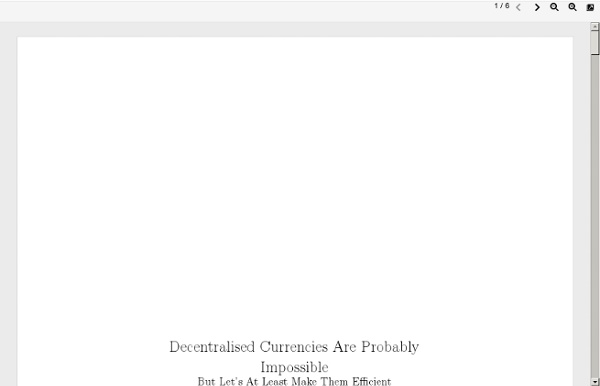 THE BITCOIN BUBBLE If you haven't already heard about bitcoin, the first popular cypto-currency, you soon will. The idea for the currency is simple. It's a software system that makes it possible to manufacture and trade (P2P), in a public and decentralized way, a limited digital resource. That's it. So why the interest in bitcoin? Simple. As a transactional currency that operates outside of traditional systems, it's actually a pretty good medium of exchange (particularly if those transactions are small and quick). As a store of value or an asset it's shady. So, for those of you with the stomach to take bets with eastern european mobsters and US financial boiler rooms or if your willing to bet on the fickleness of viral adoption, you might be interested in taking a look at bitcoin as an asset. As far as I know this could become the first P2P bubble. NOTE: Here's some more traditional economic analysis of bitcoin from Adam Cohen.

Bitcoin Did A Reporter Just Solve A Bitcoin Mystery? : Planet Money hide caption One bitcoin will get you this nerd merit badge. eagleapex's posterous/Flickr In 2009, a programmer who called himself "Satoshi Nakamoto" created bitcoin. The journalist Joshua Davis tries to track down Satoshi in an article (subscription req'd) in this week's New Yorker. Whoever created bitcoin, it's clear that he (or she, or they) is/are a very clever coder with a deep understanding of cryptography. An expert tells the New Yorker writer that someone with Satoshi's skills would probably be at Crypto2011, the most important cryptography conference. So he narrows the field to people from the UK at Crypto2011. After I read the article this morning, I called Gavin Andresen, a programmer who has done a lot of work on bitcoin, and who we talked to at length when we did a bitcoin story earlier this year. I asked Gavin if Michael Clear is Satoshi. "I have no idea," Gavin told me. Clear was named the top computer-science undergrad at Trinity College in Dublin in 2008.

Physical Bitcoins by Casascius Why most people refuse to accept and understand Bitcoin. - Bitcoin Community The answer is simple. It is because most modern people are prisoners of The Cave. ( ) How is this related to biticoin (and gold standard) ? The Richter Report explains here Quote In terms of their understanding of the nature of money, most people in our society are exactly like the prisoners described by Plato in his "Allegory of the Cave." Think about what happens when one of the prisoners breaks free of his chains and is gradually able to see and understand the outside world of real, honest money. Think also about the reaction of the prisoners when confronted by the person who has seen the outside world of real, honest money. 1) "Gold and Economic Freedom," Alan Greenspan (1966). ( "Gold and Economic Freedom," Alan Greenspan (1966).) Again, just like Alan Greenspan said in 1966 (probably way before he has chosen (maybe) to join cave jailers profession):

Will Bitcoins join the ranks of US dollars, Euros and other currencies? | Patexia I first heard about Bitcoins seven months ago on the radio. I understood them to be some sort of alternative, online “currency” but it sounded a little too esoteric to me at the time. A few months later I heard about them again in a story covering an underground website called Silk Road that sold drugs, including illicit drugs, and people used Bitcoins to pay for these drugs. In a day and age when people are starting to question the true interests of the government and corporations and banks, especially in light of the Occupy protests, it’s no wonder that Bitcoins were created. Bitcoins were first introduced in a paper in late 2008 written by a hacker going under the pseudonym Satoshi Nakamoto. There are several good reasons for “digital” coins. There will never be more than 21 million Bitcoins due to the design of the network and they are almost infinitely divisible although this may not be a plus if the value is too low. Of course, there are just as many cons.

Student startup storms cyberspace A student start-up launched in July gives consumers easy access to new digital currency that is quickly spreading across cyberspace. Thomas McCabe ’12 founded Get-Bitcoin.com this summer after struggling to find websites that sell Bitcoins, a digital currency created in 2009 that people can use to anonymously trade and buy products from select companies. McCabe said traffic on the website is increasing daily — the site earned over $8,500 in revenue on Monday alone — but the company could potentially face restrictions from the U.S. government. Since Bitcoin trading is anonymous, people often use them to buy or sell illegal drugs and services, and this illegal activity has prompted U.S. “It’s like virtual gold,” McCabe said of Bitcoins. “Payments are about to change dramatically,” Feigelson said of the trend to use online currency. Still, in just the past two weeks, McCabe said, the number of orders for Bitcoins has quadrupled.

The Rise and Fall of Bitcoin | Magazine In November 1, 2008, a man named Satoshi Nakamoto posted a research paper to an obscure cryptography listserv describing his design for a new digital currency that he called bitcoin. None of the list’s veterans had heard of him, and what little information could be gleaned was murky and contradictory. In an online profile, he said he lived in Japan. One of the core challenges of designing a digital currency involves something called the double-spending problem. Bitcoin did away with the third party by publicly distributing the ledger, what Nakamoto called the “block chain.” When Nakamoto’s paper came out in 2008, trust in the ability of governments and banks to manage the economy and the money supply was at its nadir. Nakamoto himself mined the first 50 bitcoins—which came to be called the genesis block—on January 3, 2009. The small band of early bitcoiners all shared the communitarian spirit of an open source software project. Bitcoin 101 How They’re Made How They’re Mined Play Dough

Bitcoin: the hacker currency that’s taking over the web Global, private and untraceable, it’s the monetary system of choice for libertarians, geeks, businesspeople and, apparently, drug kingpinsEarlier this week, two senators sent a letter to the US Attorney General, copied to the Drugs Enforcement Agency, alerting them to the existence of an underground website called Silk Road. Like a lawless eBay, Silk Road users can, according to the senators, “freely purchase and sell illegal drugs . . . from cocaine and heroin, to ecstasy and marijuana”. For this they are using the digital currency Bitcoin.Created in 2009 by an anonymous Japanese computer science student using the pseudonym Satoshi Nakamoto, Bitcoin was initially adopted by hackers as a means of bartering services. Now it is fast becoming the unofficial currency of the web.Anyone can buy virtual “coins” at a variety of online exchanges, using major global currency – but they aren’t just used for drugs. Unlike traditional national currencies, Bitcoin has no central issuing authority.

On Life and Liberty - Erik Voorhees: Bitcoin - The Libertarian Introduction ***Originally published in Freedom's Phoenix Magazine - April 13, 2012***Republish, copy, and distribute at will. What it is, how it's used, and why you should care. Erik Voorhees - April 11, 2012 "When a state currency is challenged, the state itself is challenged, and market forces move swiftly around sickly, depreciating inhibitors." · Introduction · What is Bitcoin? · How does it work? · Why is Bitcoin valuable? · No really, WHY is Bitcoin valuable? · How does one obtain it? · Being careful with money · What can one do with it? · Bitcoin vs. · Bitcoin and Disruption · Useful Resources Introduction There has been much talk about Bitcoin within libertarian and economic circles. Like all powerful tools, it's important for those interested in using Bitcoin to spend some time engaging in the due diligence of education. The basics of Bitcoin are all covered here, ranging from a light technical overview to due diligence to monetary economics and theory. What is Bitcoin? How does it work?

BitCoin: The Currency Of The Future? This week, BitCoin (BTC), the virtual cryptocurrency that is not supported by any national bank or government, reached an all-time trading record, selling at $33.22 for a single BTC. Kim Dotcom’s cloud hosting website Mega has recently started accepting BitCoins as a form of payment, following the example set by WordPress, Reddit and countless other online businesses. But how do you begin working with BitCoins? CBT Nuggets, an American IT training company, has published a series of free online training videos, which cover a variety of BitCoin-related topics from setting up and using a BitCoin wallet to updating company websites for accepting payments in virtual currency. Satoshi’s gift BitCoin is a 100 percent digital form of currency, based on an open-source, peer-to-peer Internet protocol. “It is not a question of whether businesses will accept BitCoin, it is ‘when’ they do it,” Charbonneau tells us. “The disadvantage for the consumer is they have to completely trust the business.

Bitcoin rises - Opinion About a year ago I wrote an article, published on this site, titled "Understanding Bitcoin". It was an attempt at introducing Bitcoin technology and analysing its social implications. Now Bitcoin markets are trading at record prices of over $40. This increase, along with a series of recent developments, marks a new overall state of affairs for this project. Perhaps the most obvious milestone reached during the last few days is the surpassing of the previous top valuation of U$31.9, achieved by mid-2011. Let's recap. The context in 2013 looks dramatically different to the one during the huge rally-and-crash of 2011. Celebrating protocol One of the more subtle but profound events that took place in the past few months is a reduction by half in the rate at which bitcoins are produced. In economic terms, though, the halving did in fact result in a drastically reduced number of new bitcoins, from 300 to 150 per hour. Three kings Metal gear Bitcoin-logic ventures Virtuous spirals

The Beginners Guide To Bitcoin – Everything You Need To Know - Monetarism - A UK Money and Personal Finance Blog In February 2013, version 0.8.0 of Bitcoin was released. This virtual payments system is the financial equivalent of Latin, the language with no native speakers. In the case of Bitcoin, though, what you are dealing with is a financial structure with no central bank, no one regulatory body as such, and no physical form. That may sound odd – so let’s look in more detail at Bitcoin, how it works, and what its future might be. What is Bitcoin? The brief description of Bitcoin given above is overly simplistic, and as you might expect, there’s plenty of thought behind this means of paying for goods and services – it is, by no means, an unregulated system. In principle though, its features are as follows: Some of that might still not make much sense, so let’s ask a more pertinent question: Where is Bitcoin? Bitcoin has no physical form and no central ‘bank’ or regulator as such – so where is it? Bitcoin Inflation Important aspects of this are: Bitcoin Bugs The Output Overflow Bug ‘I Just Got Hacked’