What is Bitcoin? - We Use Coins 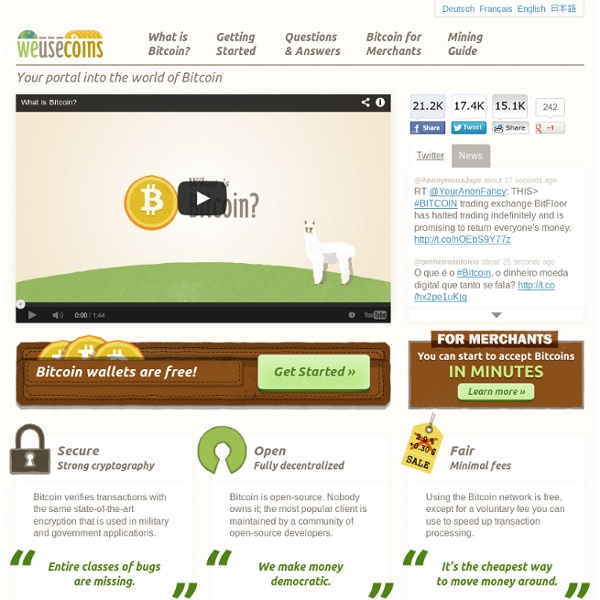 About Darknet Darknet is a group of like-minded individuals founded around 1999 sharing knowledge in password cracking, cracking, cryptography, programming (C++, VB, Delphi, C, Pascal, Assembly, Python, PERL, Bash and so on), network security, Linux, Windows, UNIX and more. It started off on EFNet IRC network back in the days when being a script kiddy was moderately cool, packet wars were in and lame DOS attacks like WinNUKE and the ath0++ modem drop were cool. From that we progressed along, I got myself a web host and made a simple site for my first real domain, was born in the year 2000. It had a lame page with bright green Darknet graphic and thats all.

What Bitcoin Is, and Why It Matters Unlike other currencies, Bitcoin is underwritten not by a government, but by a clever cryptographic scheme. For now, little can be bought with bitcoins, and the new currency is still a long way from competing with the dollar. But this explainer lays out what Bitcoin is, why it matters, and what needs to happen for it to succeed. Where does Bitcoin come from? In 2008, a programmer known as Satoshi Nakamoto—a name believed to be an alias—posted a paper outlining Bitcoin’s design to a cryptography e-mail list. Then, in early 2009, he (or she) released software that can be used to exchange bitcoins using the scheme.

Phreaking The term phreak is a portmanteau of the words phone and freak, and may also refer to the use of various audio frequencies to manipulate a phone system. Phreak, phreaker, or phone phreak are names used for and by individuals who participate in phreaking. Because identities were usually masked, an exact percentage of prevalence cannot be calculated. History[edit] Bitcoin, the Peer-to-Peer Currency that Hopes to Change the World - Industry Bitcoin is a peer-to-peer currency with no centralized authority, that provides some level of anonymity to its users. Those behind it claim that it has the potential to change the way our economies work. But you already knew all of that: Bitcoin has been around for quite a few years, but in the last few months it has received more attention and discussion than in its whole lifespan. This attention, in tandem with the limited supply of currency, has seen huge, leaping increases in the value of each Bitcoin in USD. By now, most of us know at least a little about it.

Baking Pi - Operating Systems Development This course has not yet been updated to work with the Raspberry Pi models B+ and A+. Some elements may not work, in particular the first few lessons about the LED. It has also not been updated for Raspberry Pi v2. Welcome to Baking Pi: Operating Systems Development! Could Bitcoin be the global online currency? With the rapid growth of eCommerce over the last decade, online payment has become a hugely influential area. This niche has made fortunes for credit card companies, and services like Paypal, providing the ability for real currency to be used online with relative ease. With the estimated total value of eCommerce approaching a trillion US$, there is another solution that may be even more useful. Perhaps it is time for a global online currency? Bitcoin is such a currency, created in 2009 by Satoshi Nakamoto. It is an anonymous, open source and peer to peer fiat currency.

Networks In mathematical terms, a network is a graph in which the nodes and edges have values associated with them. A graph is defined as a pair of sets , where is a set of nodes (vertices or points within the graph) labelled Cryptocurrency When the virtual currency bitcoin was released, in January 2009, it appeared to be an interesting way for people to trade among themselves in a secure, low-cost, and private fashion. The Bitcoin network, designed by an unknown programmer with the handle “Satoshi ­Nakamoto,” used a decentralized peer-to-peer system to verify transactions, which meant that people could exchange goods and services electronically, and anonymously, without having to rely on third parties like banks. Its medium of exchange, the bitcoin, was an invented currency that people could earn—or, in Bitcoin’s jargon, “mine”—by lending their computers’ resources to service the needs of the Bitcoin network. Once in existence, bitcoins could also be bought and sold for dollars or other currencies on online exchanges. Yet over the past year and a half Bitcoin has become, for some, much more.

MapReduce Overview[edit] MapReduce is a framework for processing parallelizable problems across huge datasets using a large number of computers (nodes), collectively referred to as a cluster (if all nodes are on the same local network and use similar hardware) or a grid (if the nodes are shared across geographically and administratively distributed systems, and use more heterogenous hardware). Processing can occur on data stored either in a filesystem (unstructured) or in a database (structured). MapReduce can take advantage of locality of data, processing it on or near the storage assets in order to reduce the distance over which it must be transmitted. "Map" step: Each worker node applies the "map()" function to the local data, and writes the output to a temporary storage. A master node orchestrates that for redundant copies of input data, only one is processed."

Design Patterns It has been highly influential to the field of software engineering and is regarded as an important source for object-oriented design theory and practice. More than 500,000 copies have been sold in English and in 13 other languages. The authors are often referred to as the Gang of Four (GoF).[1] History[edit] Visualizing Hash Functions I've been working on some static visualizations of hash functions, starting with SHA1 and MD5 (images here and here , respectively). The two sample images show the process of computing the respective hash functions on the input "denny" (with ASCII encoding -- i.e., the input in hex is "64656E6E79"). A portion of the MD5 image is included below: Notes about these two particular algorithms and their visualizations: Both algorithms are mostly defined in terms of operations on 32-bit "words", which essentially means 32-bit integers.