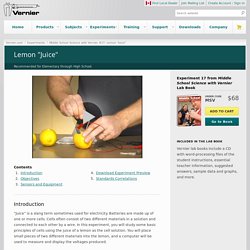 Loaded: 0% Progress: 0% Introduction “Juice” is a slang term sometimes used for electricity. Batteries are made up of one or more cells. Objectives In this experiment, you will Build several cells.Measure and display cell voltages.Discover which combinations produce a voltage.Decide which combination makes the "best" battery. The Science Club: hotlinks for science activities.

SCIENCE FAIR PROJECTS: Kids' science projects here, THE SCIENCE CLUB. Lesson Plan, Activity, or Teaching Idea from A to Z Teacher Stuff. ELATE. This activity is about velocity, acceleration, and deceleration,as influenced by forces of friction and gravitation. 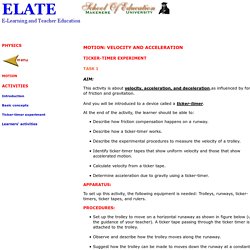 And you will be introduced to a device called a ticker-timer. At the end of the activity, the learner should be able to: Describe how friction compensation happens on a runway. Describe how a ticker-timer works. Describe the experimental procedures to measure the velocity of a trolley. To set up this activity, the following equipment is needed: Trolleys, runways, ticker-timers, ticker tapes, and rulers. Set up the trolley to move on a horizontal runaway as shown in figure below (under the guidance of your teacher). Describe the various tapes that show uniform velocity and those showing accelerated motion. DETERMINING VELOCITY FROM THE TICKER TAPE Answer the following questions:

Representation of Different Types of Motion by Simple Graphs. In the previous experiment, we worked with constant velocity in one direction and found that the motion was represented by simple graphs whose slopes were straight lines. 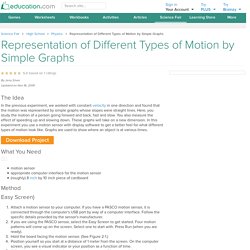 Here, you study the motion of a person going forward and back, fast and slow. You also measure the effect of speeding up and slowing down. These graphs will take on a new dimension. How to Find Maximum Height of a Projectile. Ever wanted to know how high and how fast you can kick a football? 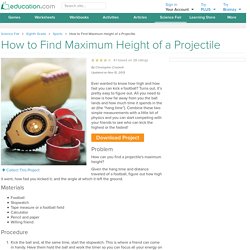 Turns out, it’s pretty easy to figure out. Distance, Velocity and Time: Equations and Relationship. Do you remember the story of the tortoise and the hare? 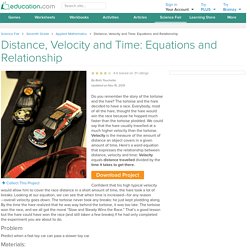 The tortoise and the hare decided to have a race. Everybody, most of all the hare, thought the hare would win the race because he hopped much faster than the tortoise plodded. Hundreds of Science Fair Projects For Students. Choosing a Light Bulb Filament. Grade Level: 8th – 10th; Type: Physics In this experiment, you will create your own light bulb and test filaments of different thicknesses to see which keeps the bulb burning for the longest time. 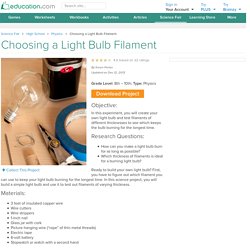 A Plasma Ball! What is it and How Does it Work? Grade Level: 6th - 9th; Type: Physics To determine what a plasma ball is and how it works. 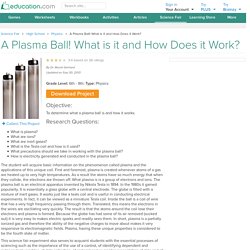 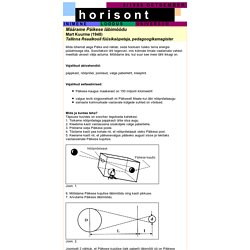 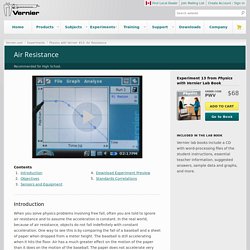 Loaded: 0% Progress: 0% Introduction When you solve physics problems involving free fall, often you are told to ignore air resistance and to assume the acceleration is constant. In the real world, because of air resistance, objects do not fall indefinitely with constant acceleration. Air resistance is sometimes referred to as a drag force. Newton's 3 Laws of Motion. Problem: Does height of a ramp affect the distance a hot wheels car will travel? 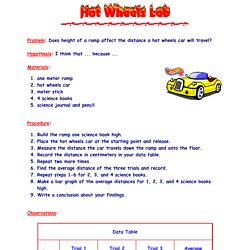 Hypothesis: I think that ... because ... Materials: Edheads - Activate Your Mind! Math is Fun - Maths Resources. Schoolphysics. Sample Creative Teaching Ideas Convection and a tea bag. The resourceful physics teacher. Physics teacher Keith Gibbs shares some of his many demonstrations and experiments for the physics classroom.

During more than 30 years of teaching physics, I have come across many interesting demonstrations and teaching ideas – often suggested by relatives, friends, colleagues and past students. In 2000, I began to gather these ideas together – this was the basis of the Schoolphysics website and CD-ROM collection. Over time, I added more explanation and background for teachers whose specialism was not physics. Below are four ideas from the collection. Praktilised tööd füüsikas - Avaleht. Marvin and Milo. School Science Projects & Experiments for Kids. Try these easy home and school science projects now.

They're simple, use common household items, and kid-tested to work right the first time. And they include scientific background on the subject, so you can learn more about it. Why do leaves change color in the fall? All. Paper Clip Heat Learn about the structure of metals as you use a paper clip to turn mechanical work into heat! The Egg Squeeze You can squeeze an egg into a jar with just the power of air pressure Solid as a Rock? Rocks may seem solid, but there's more to them than meets the eye. Air Matters. Physics Science Fair Projects, Ideas, and Experiments. Physics, formally called natural philosophy, is the science of energy and matter and the interactions between the two.

Physics includes the study of material and energy as related to motions, heat, light, and force. Modern extensions of physics has expanded to include nuclear physics, particle physics, plasma physics, and cryogenics. Additive Colors To discover how white light is made. Balloon Rocket Car To demonstrate Newton's Third Law of Motion by constructing a balloon-powered rocket car. Build an Electromagnet To find out how electromagnetism works by constructing an electromagnet and be able to answer the question “How does electromagnetism work?” Science Fair Project Ideas - Over 2,000 Free Science Projects. Energy Quest - Science Projects, main page.