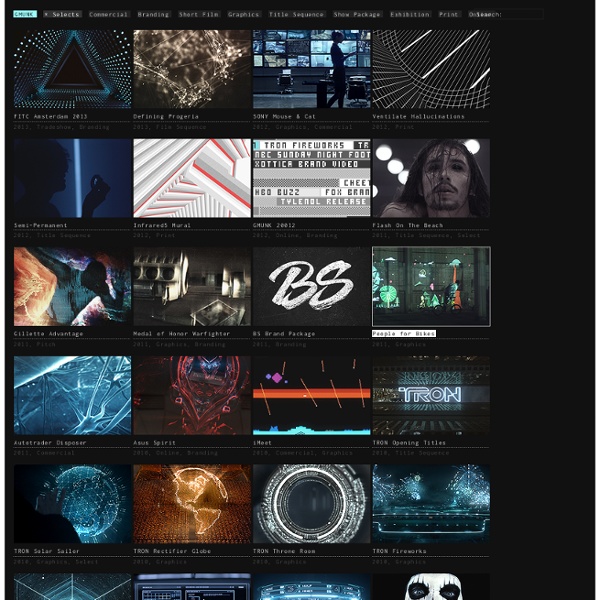 Tron Legacy (2010) Year: 2010 Tron Legacy permalink I spent a half year writing software art to generate special effects for Tron Legacy, working at Digital Domain with Bradley "GMUNK" Munkowitz, Jake Sargeant, and David "dlew" Lewandowski. This page has taken a long time to be published because I've had to await clearance. A lot of my team's work was done using Adobe software and Cinema 4D. The rest of it got written in C++ using OpenFrameworks and wxWidgets, the way I've always done it with this team ;) Uniquely however, Digital Domain's CG artists were able to port my apps over to Houdini for further evolution and better rendering than OpenGL could ever provide. Interview with GMUNK about the team's process In addition to visual effects, I was asked to record myself using a unix terminal doing technologically feasible things. HexVirus is a spherical map of the globe that features vector outlines of the continents. The scoreboard was the first element I worked on. Fireworks, mmmm.

GENERIQUE: 1er site dédié au générique de film About Introduction InteractiveSpaces is an interdisciplinary research center bringing together architecture, engineering, and computer science with the research mission to create new concepts for future interactive spaces. InteractiveSpaces.net also bring together companies and public researchers in a R&D activities leading to new products and services for specific domains.The research activities focus on six themes which may be applicable to one or more of the application domain projects undertaken in the center. The application domains to be studied include schools, libraries, museums, homes and specific workplaces. InteractiveSpaces is an IT research center, and it includes competences within a number of IT research areas such as augmented reality, virtual reality, hypermedia, human-computer interaction, context-awareness, tracking, mobile computing, etc. Contact Center Manager Kaj Grønbæk, Professor, Department of Computer Science, University of Aarhus, Åbogade 34, DK-8200 Århus N.

Lorem Ipsum - All the facts - Lipsum generator Visual and Special Effects Film Milestones Greatest Visual-Special Effects (F/X) Milestones in Film History: From even its earliest days, films have used visual magic ("smoke and mirrors") to produce illusions and trick effects that have startled audiences. In fact, the phenomenon of persistence of vision (it was first described to some degree in 1824 by British physician Peter Mark Roget) is the reason why the human eye sees individual frames of a movie as smooth, flowing action when projected. The earliest effects were produced within the camera (in-camera effects), such as simple jump-cuts or superimpositions, or were created by using miniatures, back projection, or matte paintings. Optical effects came slightly later, using film, light, shadow, lenses and/or chemical processes to produce the film effects. Film titles, fades, dissolves, wipes, blow ups, skip frames, bluescreen, compositing, double exposures, and zooms/pans are examples of various optical effects. Note: The films that are marked with a yellow star

60designwebpick Melancholia: when worlds collide, beautifully In Melancholia, director Lars von Trier tells the story of two sisters, played by Kirsten Dunst and Charolette Gainsbourg, contemplating their own tense relationship as the Earth faces its greatest threat from a passing planet. We talk to visual effects supervisor Peter Hjorth, as well as Platige Image and Pixomondo, about how they brought a subtle and artistic feel to their effects work. An excerpt from Peter Hjorth's sketchbook for 'Melancholia'. Melancholia is Hjorth’s sixth film with Lars von Trier, with earlier collaborations on pics such as Antichrist and Dogville. Working with an illustrator, Hjorth produced a sketchbook template, while also gaining much research from a planetary science expert for the crucial shots of Melancholia as seen from space and from Earth. Once principal photography began, Hjorth would shoot as many extra elements as possible, often using lunch breaks to acquire additional imagery. The overture Background plate. Kirsten Dunst plate. Final shot.