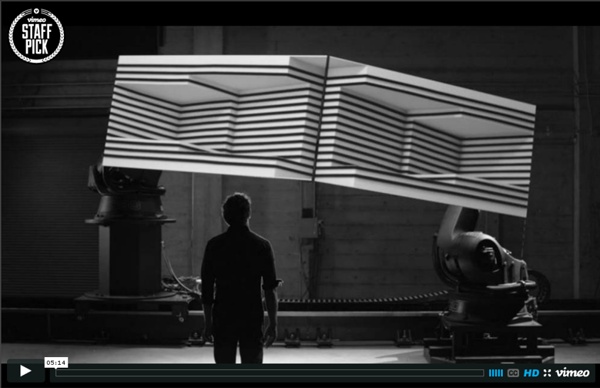 Afternoon Animation: Kaleidoscope Ft. The Italian National Team Of Gymnastics The perfect way to space out on a Tuesday afternoon, KALEIDOSCOPE by Freddy brings viewers through an abstract paradise of runs, kicks, and jumps courtesy of the Italian National Team of Gymnastics. Created by DLV BBDO and production team abstract:groove, the collective, paired with Director Luigi Pane, experimented with the kaleidoscope effect for dramatic results. Working with 4 thaumascopes of different sizes and shapes, the biggest 9 meters long with a triangular opening of 2.5 meters, and the smallest 1.5 meters in length with a square opening of 60 centimeters, the team worked extensively to achieve the graphic patterns above.

A moment of silence for the Western Black Rhino Officially extinct Another beautiful species that we won't see again. The western black rhino, which is a sub-species of black rhino, was was once widespread in the savanna of sub-Saharan Africa, but no more. Morphogenetic Creations by Andy Lomas Created by a mathematician, digital artist and Emmy award winning supervisor of computer generated effects – Andy Lomas, Morphogenetic Creations is a collection of works that explore the nature of complex forms that can be produced by digital simulation of growth systems. These pieces start with a simple initial form which is incrementally developed over time by adding iterative layers of complexity to the structure. The aim is to create structures emergently: exploring generic similarities between many different forms in nature rather than recreating any particular organism.

Mesmerising video created using kaleidoscopes & gymnasts Production studio abstract:groove and advertising agency DLV BBDO have created a mesmerising promotional film for sports clothing brand Freddy by using a clever combination of kaleidoscopes and gymnasts. No post-production was used to create the kaleidoscopic effects seen in the film. Instead, abstract:groove designed and built four thaumascopes varying in shape and size in order to capture the footage. Gymnasts from the Italian National Team of Rhythmic Gymnastic "le Farfalle" then performed within the thaumascopes for abstract:groove to capture on camera. Prior to filming, abstract:groove studied small scale models and then simulated the movements in CGI to determine how well they work. You can take a look behind the scenes to find out more about how the film was made by watching the video below.

The Last Great Auk The black and white Great Auk was a beautiful bird of bizarre proportions. Its ribbed beak was huge and unwieldy, its legs were too short and its stubby wings were far too small to carry its big body into the air. In these regards, the Great Auk’s clumsy appearance rivals that of the Dodo. And that’s not the only thing these two birds have in common. Variable 4 Variable 4 is an outdoor sound installation that translates weather conditions into musical patterns in real time. Using meteorological sensors connected to a custom software environment, the weather itself acts as conductor, navigating through a map of twenty-four specifically-written movements. Every aspect of the piece, from broad harmonic progressions down to individual notes and timbres, is influenced by changes in the environment: wind speed, rainfall, solar radiation, humidity, tropospheric variance, temperature, and more. The resultant composition is performed over an indeterminate duration through eight loudspeakers integrated into the landscape. More information

alexandre burton Alexandre Burton's interest for new media technology stems from a desire to reveal new forms of expressivity through digital processes. Tightly integrating hardware and software, his artistic work is the result of attempts to think beyond media, in a realm where sound, images and processes cohabit and answer to each other in meaningfull ways. His work is regularily presented in international new media and music events. He was awared a first prize in Bourges for software design (with Jean Piché for Cecilia) and an honorable mention in Ars Electronica in Digital Music (with artificiel, for Bulbes)

People Who Achieve Their Goals Do These 5 Things When Angela Duckworth was 27, she left her high-pressure management-consulting job for an even tougher gig: teaching seventh-grade math at a New York City public school. Duckworth quickly learned it wasn’t smarts that determined whether her students accomplished their goals and got good grades—not by a long shot. “I was convinced every one of my students could learn the material if they worked long and hard enough,” she says in her popular TED talk. When Plants Jam with Synths: Leslie Garcia’s Open Project Lets Plants Talk with Sound Pulsu(m) Plantae _ project presentation from LessNullVoid on Vimeo. You may have seen a plant used as a musical instrument before, by measuring capacitance across the leafy life form and turning it into a touch sensor. This is something different: it’s letting the plant itself express communication through sound, using biofeedback to turn the living systems on the plant into something audible.

The World Factbook People from nearly every country share information with CIA, and new individuals contact us daily. If you have information you think might interest CIA due to our foreign intelligence collection mission, there are many ways to reach us. If you know of an imminent threat to a location inside the U.S., immediately contact your local law enforcement or FBI Field Office. Paleodictyon Paleodictyon A project by Simon Geilfus, Yannick Jacquet and Thomas Vaquié Centre Pompidou Metz, France, October 6th 2012 Loosely inspired by the work and research of deep-sea expert Peter A. Rona, the piece abolishes notions of scale by contrasting micro-architecture with human construction. Fascinated by the marks left by unknown creatures called Paleodictyon Nodosum, he offers the hypothesis that these hexagonal structures are designed in order to cultivate bacteria. A modern day Captain Nemo, Peter A. Rona wanders relentlessly across the seabed looking to discover these living creatures, of which we only know of their mysterious geometrical makeup, reminiscent of the Centre Pompidou’s hexagonal shape frame.