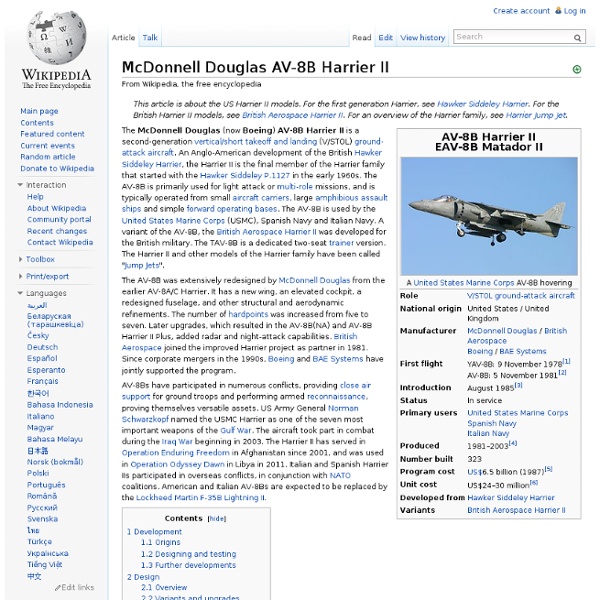 The project that eventually led to the AV-8B's creation started in the early 1970s as a cooperative effort between the United States and United Kingdom (UK), aimed at addressing the operational inadequacies of the first-generation Harrier. Early efforts centered around a powerful revamped Rolls-Royce Pegasus engine to dramatically improve the capabilities of the Harrier. Due to budgetary constraints, the United Kingdom abandoned the project in 1975. Following the withdrawal of the UK, McDonnell Douglas extensively redesigned the earlier AV-8A Harrier to create the AV-8B. Typically operated from small aircraft carriers, large amphibious assault ships and simple forward operating bases, AV-8Bs have participated in numerous military and humanitarian operations, proving themselves versatile assets. Development[edit] Origins[edit] In December 1973, a joint American and British team completed a project document defining an Advanced Harrier powered by the Pegasus 15 engine. Upgrades[edit] Related:  ADF Combined • Unsorted other defence forces

Joint Strike Fighter program Joint Strike Fighter (JSF) is a development and acquisition program intended to replace a wide range of existing fighter, strike, and ground attack aircraft for the United States, the United Kingdom, Canada, Australia, The Netherlands and their allies. After a competition between the Boeing X-32 and the Lockheed Martin X-35, a final design was chosen based on the X-35. This is the F-35 Lightning II, which will replace various tactical aircraft, including the US F-16, A-10, F/A-18, AV-8B and British Harrier GR7 & GR9s, and the Canadian CF-18. Project formation[edit] The JSF program was the result of the merger of the Common Affordable Lightweight Fighter (CALF) and Joint Advanced Strike Technology (JAST) projects.[2][3] The merged project continued under the JAST name until the engineering, manufacturing and development (EMD) phase, during which the project became the Joint Strike Fighter.[4] JSF competition[edit] Outcome[edit] Program issues[edit] Alleged Chinese espionage[edit]

British Aerospace Harrier II The British Aerospace Harrier II is a second-generation vertical/short takeoff and landing (V/STOL) jet aircraft used previously by the Royal Air Force (RAF) and, between 2006 and 2010, the Royal Navy (RN). The aircraft was derived from the McDonnell Douglas AV-8B Harrier II, which itself was a development of the Hawker Siddeley Harrier. Initial deliveries of the Harrier II were designated in service as Harrier GR5; subsequently upgraded airframes were redesignated accordingly as GR7 and GR9. Under the Joint Force Harrier organisation, both the RAF and RN operated the Harrier II, including routine operational deployments onboard the navy's Invincible class aircraft carriers. In December 2010, budgetary pressures led to the early retirement of all Harrier IIs from service, at which point it was the last of the Harrier derivatives remaining in British service. Design and development[edit] Origins[edit] Description and role[edit] RAF Harrier GR9 in flight, 2010 Further developments[edit]

Fridtjof Nansen-class frigate Design[edit] The frigates were originally intended as a replacement for the aging Oslo-class frigates, with a primary focus on antisubmarine warfare (ASW). Eventually, the need for a robust anti-aircraft defense as well as the possibility of incorporating the Naval Strike Missile SSM produced by Norwegian company Kongsberg Defence & Aerospace led to a more multi-role design. The selection of Navantia as prime contractor led to the design being very similar to the Spanish Navy's Alvaro de Bazan-class frigates, including the incorporation of Lockheed Martin's AEGIS combat system. Improvements[edit] The new frigates will prove a great improvement over their predecessors, the Oslo-class frigates, not only in size, but also in personnel, capabilities and equipment. Current activities[edit] In November 2009 she became involved in a firefight with suspected pirates after being attacked while inspecting a fishing vessel. Availability[edit] List of ships[edit] Images[edit] References[edit]

Lockheed Martin F-35 Lightning II The Lockheed Martin F-35 Lightning II is a family of single-seat, single-engine, fifth-generation multirole fighters under development to perform ground attack, reconnaissance, and air defense missions with stealth capability. The F-35 has three main models; the F-35A is a conventional takeoff and landing variant, the F-35B is a short take-off and vertical-landing variant, and the F-35C is a carrier-based variant. The F-35 is descended from the X-35, the product of the Joint Strike Fighter (JSF) program. It is being designed and built by an aerospace industry team led by Lockheed Martin. F-35 JSF development is being principally funded by the United States with additional funding from partners. Development[edit] JSF program requirements and selection[edit] The JSF program was designed to replace the United States military F-16, A-10, F/A-18 (excluding newer E/F "Super Hornet" variants) and AV-8B tactical fighter aircraft. Design phase[edit] On 7 July 2006, the U.S.

Lockheed AC-130 The Lockheed AC-130 gunship is a heavily armed ground-attack aircraft variant of the C-130 Hercules transport plane. The basic airframe is manufactured by Lockheed, while Boeing is responsible for the conversion into a gunship and for aircraft support.[1] The AC-130A Gunship II superseded the AC-47 Gunship I during the Vietnam War. All of the weaponry aboard is mounted to fire from the left (port) side of the non-pressurised aircraft. During an attack the gunship performs a pylon turn, flying in a large circle around the target, allowing it to fire at it far longer than a conventional attack aircraft. The AC-130H Spectre was armed with two 20 mm M61 Vulcan cannons, two Bofors 40mm autocannon,[citation needed] and one 105 mm M102 cannon, although on most missions after 1994 the 20 mm cannons were removed due to their incompatibility with precision targeting and to carry more 40 mm and 105 mm ammunition. Development[edit] Origins[edit] AC-130H Spectre near Hurlburt Field, Florida in 1988

British Aerospace Sea Harrier The British Aerospace Sea Harrier is a naval short take-off and vertical-landing/vertical take-off and landing jet fighter, reconnaissance and attack aircraft, a development of the Hawker Siddeley Harrier. It first entered service with the Royal Navy in April 1980 as the Sea Harrier FRS1 and became informally known as the "Shar".[1] Unusual in an era in which most naval and land-based air superiority fighters were large and supersonic, the principal role of the subsonic Sea Harrier was to provide air defence of the fleet from Royal Navy aircraft carriers. The Sea Harrier served in the Falklands War, both of the Gulf Wars, and the Balkans conflicts; on all occasions it mainly operated from aircraft carriers positioned within the conflict zone. Its usage in the Falklands War was its most high profile and important success, where it was the only fixed-wing fighter available to protect the British Task Force. Development[edit] Design[edit] Locations of the four nozzles on the aircraft. [edit]

GAU-12 Equalizer The General Dynamics GAU-12/U Equalizer is a five-barrel 25 mm Gatling-type rotary cannon. The GAU-12/U is used by the United States, Italy and Spain, which mount the weapon in their fighter jets such as the AV-8B Harrier II, airborne gunships such as the Lockheed AC-130, and land-based fighting vehicles. Development[edit] The five-barrel 'Equalizer' cannon was developed in the late 1970s, based on the mechanism of the GAU-8/A Avenger cannon, but firing a new NATO series of 25 mm ammunition. The GAU-12/U cannon is operated by a 15 hp (11 kW) electric motor, in external mounts supplied by a bleed air driven pneumatic system. Uses[edit] An AV-8 Harrier II; the two pods on the underside of the fuselage hold the cannon (left-hand side of the aircraft, visible hole) and ammunition (right-hand side of the aircraft). RAF and Fleet Air Arm Harriers have not adopted the Equalizer for their Harrier GR7 and GR9s. The Equalizer was also used as the basis for the Sea Vulcan 25. GAU-22/A[edit]

AIM-120 AMRAAM Origins[edit] AIM-7 Sparrow MRM[edit] The AIM-7 Sparrow medium range missile (MRM) was purchased by the US Navy from original developer Howard Hughes[8] in the 1950s as its first operational air-to-air missile with "beyond visual range" (BVR) capability. With an effective range of about 12 miles (19 km), it was introduced as a radar beam riding missile and then it was improved to a semiactive radar guided missile which would home in on reflections from a target illuminated by the radar of the launching aircraft. It was effective at visual to beyond visual range. Although designed for use against non-maneuvering targets such as bombers, due to poor performance against fighters over North Vietnam, these missiles were progressively improved until they proved highly effective in dogfights. AIM-54 Phoenix LRM[edit] The US Navy later developed the AIM-54 Phoenix long range missile (LRM) for the fleet air defense mission. ACEVAL/AIMVAL[edit] Requirements[edit] Development[edit] Boresight mode[edit]

Sikorsky SH-3 Sea King The Sikorsky SH-3 Sea King (company designation S-61) is an American twin-engined anti-submarine warfare (ASW) helicopter designed and built by Sikorsky Aircraft. It was a landmark design, being one of the first ASW helicopter to take advantage of turboshaft engines, as well as being the first amphibious helicopter in the world.[2] Introduced in 1961, it served as the United States Navy as a key ASW and utility asset for several decades before being replaced by the non-amphibious Sikorsky SH-60 Seahawk in the 1990s. The type also proved popular in civil service and with foreign military customers, as of 2014 many remain in service in number of nations around the world. Development[edit] Origins[edit] During the Cold War between the US and the Soviet Union, the Soviet Navy had proceeded to construct a large submarine fleet, at one point numbering over 200 operational submarines of various types. In late 1961 and early 1962, a modified U.S. Further developments[edit] Design[edit] S-61A-4 Nuri

Tomahawk (missile) The Tomahawk missile family consists of a number of subsonic, jet engine-powered missiles designed to attack a variety of surface targets. Although a number of launch platforms have been deployed or envisaged, only sea (both surface ship and submarine) launched variants are currently in service. Tomahawk has a modular design, allowing a wide variety of warhead, guidance, and range capabilities. There have been several variants of the BGM-109 Tomahawk employing various types of warheads. Ground Launch Cruise Missiles (GLCM) and their truck-like launch vehicles were employed at bases in Europe; it was withdrawn from service to comply with the 1987 Intermediate-Range Nuclear Forces Treaty. A major improvement to the Tomahawk is network-centric warfare-capabilities, using data from multiple sensors (aircraft, UAVs, satellites, foot soldiers, tanks, ships) to find its target. In February 2014, the U.S. Several versions of control systems have been used, including: Tomahawk operators

Spanish ship Juan Carlos I (L61) Juan Carlos I is a multi-purpose warship in the Spanish Navy (Armada Española). Similar in concept to the American Wasp-class amphibious assault ship, it has the addition of a ski jump for STOVL operations. The ship will be equipped with the AV-8B Harrier II attack aircraft and can be used as an aircraft carrier. The vessel is named in honour of Juan Carlos I, the current King of Spain.[6] The design for the Buque de Proyección Estratégica (Strategic Projection Vessel), as it was initially known, was approved in September 2003. The bow of Juan Carlos I, showing the ship's ski-jump ramp. The vessel has a flight deck of 202 m (663 ft), with a "ski-jump" ramp. For the first time in the Spanish Navy, the ship uses diesel-electric propulsion, simultaneously connecting both diesels and the new technology gas turbine powerplant to a pair of azimuthal pods. The complement of the ship is around 900 naval personnel, with equipment and support elements for 1,200 soldiers.