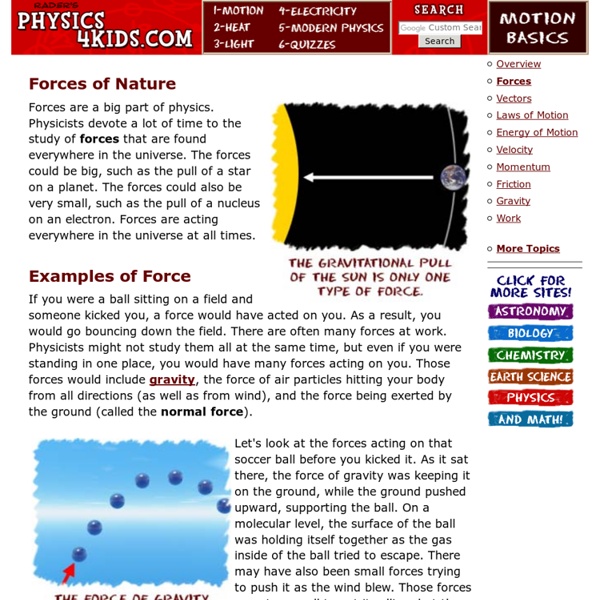 Forces are a big part of physics. Physicists devote a lot of time to the study of forces that are found everywhere in the universe. The forces could be big, such as the pull of a star on a planet. The forces could also be very small, such as the pull of a nucleus on an electron. Let's look at the forces acting on that soccer ball before you kicked it. If there is more than one force acting on an object, the forces can be added up if they act in the same direction, or subtracted if they act in opposition. There is one totally important formula when it comes to forces, F = ma. Or search the sites for a specific topic.

Motion: Introduction Motion is one of the key topics in physics. Everything in the universe moves. It might only be a small amount of movement and very very slow, but movement does happen. Acceleration is a twist on the idea of velocity. There are two main ideas when you study mechanics. There are also more complex movements when an object's direction is changing. In order to really understand motion, you have to think about forces, acceleration, energy, work, and mass. Or search the sites for a specific topic. Planet Facts: Interesting Facts about the Eight Planets Order of the planets The order of planets from closest to farthest from the Sun are Mercury, Venus, Earth, Mars, Jupiter, Saturn, Uranus and Neptune. The largest planet is Jupiter, followed by Saturn, Uranus, Neptune, Earth, Venus, Mars and, the smallest planet, Mercury. If you include dwarf planets as well, the planets in order becomes Mercury, Venus, Earth, Mars, Ceres, Jupiter, Saturn, Uranus, Neptune, Pluto, Haumea, Makemake and Eris being the furthest from the Sun. Distance of the planets from the Sun For the distances between each of the planets, see our distances between planets calculator. You can also calculate your weight on other planets. Types of planets The planets fall into two categories based on their physical characteristics: the terrestrial planets and the gas giants. Planet facts Click any of the eight planets below to find out more about the remarkable objects in our solar system. What is a planet? The answer to this question is a highly controversial one.

Workshops -- Science in Focus: Force and Motion Explore science concepts in force and motion and come away with a deeper understanding that will help you engage your students in their own explorations. With science and education experts as your guides, learn more about gravity, friction, air resistance, magnetism, and tension through activities, discussions, and demonstrations. Extensive footage shot in real classrooms shows students learning and building on ideas as they explore the relationships among motion, force, size, mass, and speed. As you watch the students develop understanding through activities that connect science concepts to real-world phenomena, you will be asked to think about your own ideas on force and motion and compare them to what you observe. Watch for the symbol on the workshop video, then click the button below for that workshop, to find the corresponding Web Highlights.