The Next Generation Science Standards 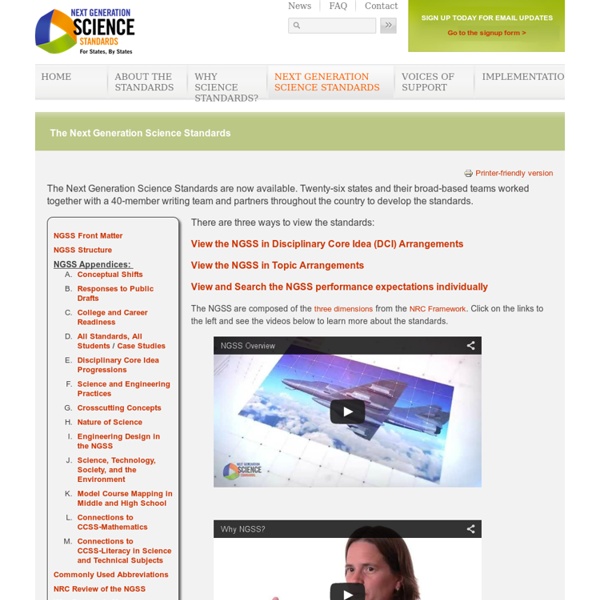 Related:  NGSS -- How to Understand

Course: Next Generation Science Standards Michigan is one of 26 states leading the development and supporting the adoption and implementation of the Next Generation Science Standards (NGSS). Working with partners from the Lead States, the National Research Council, the National Science Teachers Association, the American Association for the Advancement of Science, and Achieve, Inc., Michigan science and engineering educators have developed standards to define the science concepts and content students will need to learn from kindergarten through high school graduation. The development of the new science standards was a collaborative, state-led initiative coordinated by Achieve Inc. Science National Research Council's Role "The National Research Council was organized by the National Academy of Sciences in 1916 to associate the broad community of science and technology with the Academy's purposes of furthering knowledge and advising the federal government. Functioning in accordance with general policies determined by the Academy, the Council has become the principal operating agency of both the National Academy of Sciences and the National Academy of Engineering in providing services to the government, the public, and the scientific and engineering communities. The study was supported by the National Science Foundation, the U.S. Department of Education, the National Aeronautics and Space Administration, the National Institutes of Health, and a National Academy of Sciences president's discretionary fund provided by the Volvo North American Corporation, The Ettinger Foundation, Inc., and the Eugene McDermott Foundation."

Improving Education Standards + Author Affiliations E-mail: janet.coffey@moore.org. This month, achieve, an organization established by the 50 U.S. state governors to improve academic standards and testing, will begin finalizing its draft document (released in January 2013) of the Next Generation Science Standards (NGSS).* This document aims to establish new common standards for science education for students aged 5 to 18 in the United States, and it explicitly builds on the U.S.

Physical Science What is a scientific model? As stated in the video, a scientific model is a “testable idea… created by the human mind that tells a story about what happens in nature.” Another definition is “a description of nature that can predict things about many similar situations.” Models are developed when a scientist’s creativity and insight are combined with data and observations about many similar scenarios.

Easy Science Experiments Hands-on science experiments at home or in the classroom are a fun way to engage kids and get them excited about science. Today’s sites house hundreds of easy experiments that can be done with supplies that you probably have around the house, or can get at the grocery store. Exploratorium: Science Explorer5 stars"Get messy, get airborne, get loud, get shocked!" San Francisco's Exploratorium hands-on science museum offers a sampler of thirty simple experiments excerpted from two "Science Explorer" books. Elsewhere they provide a hundred more experiments called "snacks" because they are both fun and easy. The Science Snacks are organized by category, or listed alphabetically on a single page (where you can use your browser search function to find something specific.)

AP Physics 1 and AP Physics 2 Guided by National Research Council and National Science Foundation recommendations, the AP Program spent several years collaborating with master AP teachers and faculty members from universities and colleges to evaluate and revise the AP Physics B course. This collaboration led to a decision to replace AP Physics B with two new courses, AP Physics 1: Algebra-Based and AP Physics 2: Algebra-Based. Higher education officials have endorsed the new courses enthusiastically. The courses will benefit all members of the AP community. AP will begin offering the courses in the 2014-15 academic year, and it will discontinue the AP Physics B program following the 2013-14 academic year. Overview of Revisions

Earth & Space Science Essential Science for Teachers Exploring topics that range from soil to the solar system, Essential Science for Teachers: Earth and Space Science provides participants the opportunity to increase their science content knowledge and develop new understandings of how this content connects to K - 6 classrooms. The Geologic Timeline "Which came first, the chicken or the egg?" is an age-old question. But, what about things that happened long before there were chickens OR eggs? For Further Information When you see the following icon in the video, click at left for "A Closer Look"

The physics of robots — THINK Global School Gears. Wheels. Motors. Session 8: Writing Across the Curriculum: Video 16: Writing in Science Watch the 30-minute video "Writing in Science." Apply what you have learned in "Writing Across the Curriculum" as you watch the extended video of a classroom example. Answer the questions that follow each segment, jotting down your answers in your notebook or using them as discussion starters.

MCPS students delve into circuitry, physics by building robots "Part of the inhumanity of the computer is that, once it is competently programmed and working smoothly, it is completely honest." - Isaac Asimov, scientist, futurist, author It begins with a "big pile of electronics and metal." Wires and circuit switches and clamps and metal sheets and voltage regulators were strung out on shop tables at Sentinel High School last Wednesday evening as nearly 30 students sifted through a chaotic crop of robot guts they will eventually fashion into their own, mobile machine. At one end of the shop, students fired up welding torches, their mask-covered faces lit up in a brilliant blue hue.

The Science of Teaching Science Workshop 1. Preparing To Teach Science (90 min.) Most K-8 teachers have not had many science and math courses and often feel as though they didn't get much out of the courses they did have. How can they be expected to teach science topics for meaningful understanding when they themselves are not sure they understand the topics? We'll look at a variety of strategies teachers use to learn as much as possible about a science topic before they teach it. Science in Focus: Shedding Light on Science Workshop 1. Shine and Shadow Light is a form of energy that affects all facets of our lives. In this workshop we will explore how light travels and how shadows are formed.

The Next Move — Workshop Materials Creating Meaning from Dissonance About the Workshop When teachers elicit students' ideas at the beginning of a unit or an activity, making the transition from these ideas to student-centered investigations is often a challenge. How can students' ideas lead to productive hands-on, minds-on, and meaningful investigations? During this workshop, we'll consider how teachers can move students' thinking from exploring what they already know, to asking a question about what they want to know.

Get Started - AST The ambitious teacher is someone who “works with students’ ideas” over time. What would you experience in classrooms where ambitious teaching was the focus? You would see and hear: Teachers anchoring their instruction in complex and puzzling natural eventsStudents engaging in multiple rounds of creating and revising scientific models, explanations and evidence-based argumentsTeachers using a variety of discourse strategies with students to get them to think deeply and to respond to each other’s thinkingStudents prompting each other to engage in sense-making talk during investigations and other activitiesStudents’ ideas being represented publicly and worked on by the classTeachers using specialized tools and routines to support students who are not willing or able to participate without helpStudents speaking up about what information or experiences they need to move their thinking forward There is a lot on this website to explore.