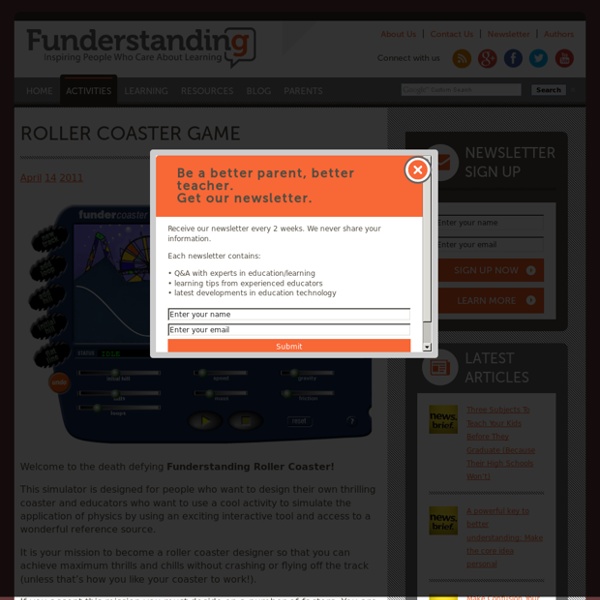 Welcome to the death defying Funderstanding Roller Coaster! This simulator is designed for people who want to design their own thrilling coaster and educators who want to use a cool activity to simulate the application of physics by using an exciting interactive tool and access to a wonderful reference source. It is your mission to become a roller coaster designer so that you can achieve maximum thrills and chills without crashing or flying off the track (unless that’s how you like your coaster to work!). If you accept this mission you must decide on a number of factors. This great educational online tool offers an interactive way for kids to play a roller coaster game, and learn while doing it. Finally, some fun online education kids! Due to some great feedback, we have decided to put back the original coaster AND also created a different version of this new coaster which keeps the coaster locked to the track. If you need help, click on the ‘? Contact us for more information.

Coaster Creator | The JASON Project Coaster Creator is an interactive game that explores the science behind roller coasters. Use your knowledge of potential energy and kinetic energy to design your own coaster. Rapid energy transfer is the key to roller coaster thrills but be careful – too much kinetic energy and you’ll crash, too little and you’ll stall. Play this game and find out if your coaster will be a smash or a snore! Important Words in this Resource: potential energy, kinetic energy, friction, thermal energy, sound energy, energy conversion, energy transformation, energy conversions, Argonaut, Vasily Titov, rollercoaster, roller coaster, digital lab, game Amusement Park Science In This Issue: Amusement Park Rides & PhysicsCentripetal Force ProjectMake a Roller CoasterInventions: Roller Coaster LoopsFabulous FactsScience Links Amusement parks are thrilling places to spend the long days of summer, but did you know that these parks are also huge physics classrooms? Bumper Cars: Newton's Three Laws of Motion Bumper cars are a great place to see Sir Isaac Newton's three laws of motion in action. Newton's First Law: Every object in motion continues in motion and every object at rest continues to be at rest unless an outside force acts upon it. Newton's Second Law: The greater the mass of an object, the harder it is to change its speed. Newton's Third Law: For every action, there is an equal and opposite reaction. Click to learn more about Newton's Three Laws of Motion. Carousel: Centripetal Force Imagine spinning a ball on a string around you. Centripetal means "center-seeking" and is the force that is acting on the carousel. Roller Coaster: Putting It All Together

Autodesk Digital STEAM Applied Mechanics Forces and energy in a theme park. Momentarily the cart comes to a standstill and it is at this point that all its kinetic energy has been converted into gravitational potential. Ofcourse, not all the kinetic energy is converted into gravitational potential, as some of it is transformed into heat through friction. As the cart falls it begins to pick up speed and gravitational potential energy is converted back into kinetic energy. Click to see a 120kb video of the cart. As the cart accelerates towards the tower, passengers experience forces equivalent to 4.5 times the force of gravity. Fill in the table below Weight and mass. Energy Hill Climb Racing One of the most addictive and entertaining physics based driving games ever made! And it's free! Meet Newton Bill, the young aspiring uphill racer. Face the challenges of unique hill climbing environments with many different cars. Features:• ⚡ Offline Play - Play whenever & wherever! Vehicles: jeep, motocross bike, monster truck, tractor, hippie van, onewheeler, quad bike, tourist bus, race car, police car, ambulance, fire truck, snow mobile, super offroad, and many more! Hill Climb Racing is free to play but there are optional in-app purchases available. Remember that we're always reading your feedback and are hard at work creating new vehicles, levels, features and of course fixing any issues you may find.

Inception Park: Impossible Roller Coaster in Buenos Aires Inception Park: Impossible Roller Coaster in Buenos Aires Article by Steph, filed under Destinations & Sights in the Travel category. The warm air of sunny downtown Buenos Aires is suddenly pierced with screams as a roller coaster zooms along the side of the building. In mid-air. With no tracks. Buenos Aires – Inception Park from Black Sheep Films on Vimeo. Entitled ‘Inception Park‘, the video references Chris Nolan’s film in which an ‘architect of dreams’ creates fantasy urban landscapes that look real at first, but quickly prove to be physically impossible. The effect is breathtaking, with a series of roller coasters and carnival rides swirling through the least likely of places. What's the best way to "defizz" a carbonated soda quickly? Holy cow, I thought that I was the only one who liked defizzed coke! Heck, I didn’t think anyone else ever used the word "defizzed"! Here are some ways to defizz soda in various situations: 1. 2. 3. You should also be careful to aim the bottle and cap away from your face and anything breakable. I should also note that if you live with anyone who doesn’t like defizzed soda, and if you keep defizzed soda in the refrigerator, it would be thoughtful to mark your defizzing bottle with a Sharpie or something. 4. It kind of embarrasses my wife when I do it in public, though. I’ve found that blowing one big bubble of air at a time works best. Great question!

UK's First Solar Powered Theme Park UK's First Solar Powered Theme Park by Energy Matters Plans have been unveiled for a solar electricity system to power Devon’s Crealy Great Adventure Park. Located near Exeter in the UK, the 100-acre theme park would become the nation's first to run its rides with solar energy. Bill Savings Calculator: How many solar panels will you need? Recommended system: Solar Power System: Details: Your potential new quarterly bill* For a more detailed bill analysis and information on going solar, call our friendly solar experts on 1300 727 151. * The system and new quarterly bill displayed above are based on information you provided along with electricity price and feed-in tariff assumptions for your postcode. Return to main renewable energy news section Other Energy Matters News Services