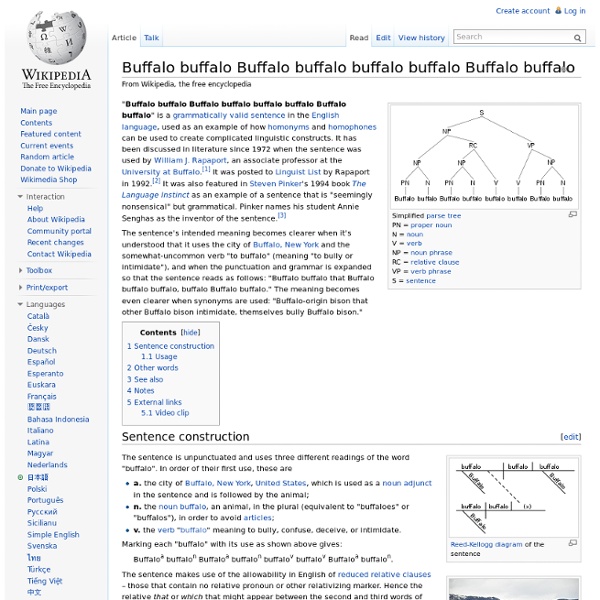 The sentence's meaning becomes clearer when it's understood that it uses three meanings of the word buffalo: the city of Buffalo, New York, the somewhat uncommon verb "to buffalo" (meaning "to bully or intimidate"), as well as the animal buffalo. When the punctuation and grammar are expanded, the sentence could read as follows: "Buffalo buffalo that Buffalo buffalo buffalo, buffalo Buffalo buffalo." The meaning becomes even clearer when synonyms are used: "Buffalo bison that other Buffalo bison bully, themselves bully Buffalo bison." Sentence construction Bison engaged in a contest of dominance. This sentence supposes they have a history of such bullying with other buffalo, and they are from upstate New York. A comic explaining the concept The sentence is unpunctuated and uses three different readings of the word "buffalo". Marking each "buffalo" with its use as shown above gives: Buffaloa buffalon Buffaloa buffalon buffalov buffalov Buffaloa buffalon. Usage Other words using the same pattern

Gary's Social Media Count Click for App Store Page Original Counter and Post from 24 Sep 2009! June 2013 ‘Social’ Update (mobile, games & heritage to come) June 2012 ‘Social’ Update August 2011 Update Why Chinese Is So Damn Hard (简体字：为什么中文这么TM难？) (繁體字：為什麼中文這麼TM難？) The first question any thoughtful person might ask when reading the title of this essay is, "Hard for whom?" The Invisible Man by Liu Bolin Article by James Pond I am the owner of Pondly.com / art lover / electrical engineer / software developer / MBA in e-business student. I blog for pleasure and love to share my Internet findings. Web site: Liu Bolin doesn’t need any fancy technology to produce the jaw-dropping illusion of invisibility.

Mother-in-law - welcome to the family I was happy. My girlfriend and me were dating for over a year, and so we decided to get married. My parents helped us in every way, my friends encouraged me, and my girlfriend? She was a dream! 10 Psychological Experiments That Went Horribly Wrong Psychology as we know it is a relatively young science, but since its inception it has helped us to gain a greater understanding of ourselves and our interactions with the world. Many psychological experiments have been valid and ethical, allowing researchers to make new treatments and therapies available, and giving other insights into our motivations and actions. Sadly, others have ended up backfiring horribly — ruining lives and shaming the profession. Here are ten psychological experiments that spiraled out of control.

List of colors The following is a list of colors. A number of the color swatches below are taken from domain-specific naming schemes such as X11 or HTML4. RGB values are given for each swatch because such standards are defined in terms of the sRGB color space. It is not possible to accurately convert many of these swatches to CMYK values because of the differing gamuts of the two spaces, but the color management systems built into operating systems and image editing software attempt such conversions as accurately as possible. The HSV (hue, saturation, value) color space values, also known as HSB (hue, saturation, brightness), and the hex triplets (for HTML web colors) are also given in the following table.

Today vs History Historically Hardcore: a series of promo posters designed by Jenny Burrows and Matt Kappler as part of a portfolio project. The Smithsonian was unaware of their creation until the clever ads went viral, at which point the Smithsonian asked Jenny to remove them from her portfolio or edit out any mention of the esteemed museum. Download the high-res pdfs from here. Couple in Colorado Decide to Build Their Own Tiny Dream Home Together Over the years, house sizes in the United States have been doubling. However, couples like Christopher Smith and Merete Mueller have been realizing that size isn’t the most important thing about where you live. Instead, they, and others in the “small house movement,” know that efficiency and green living can be more important. Dialogue with "Hidden Hand", Self-Proclaimed Illuminati Insider HH: Yes. Not just described in the Book of Revelations, but also in the prophesies of virtually every religion, spiritual philosophy, and mystery tradition throughout history. This time is now at hand. 14 Then I looked, and behold, a white cloud, and on the cloud sat One like the Son of Man, having on His head a golden crown, and in His hand a sharp sickle. 15 And another angel came out of the temple, crying with a loud voice to Him who sat on the cloud, “Thrust in Your sickle and reap, for the time has come for You to reap, for the harvest of the earth is ripe.” 16 So He who sat on the cloud thrust in His sickle on the earth, and the earth was reaped. The 'earth' is indeed ripe for Harvest. The question is, who will be ready?